You are here: Home › meteorology › Sir Francis Beaufort and the Wind Scale 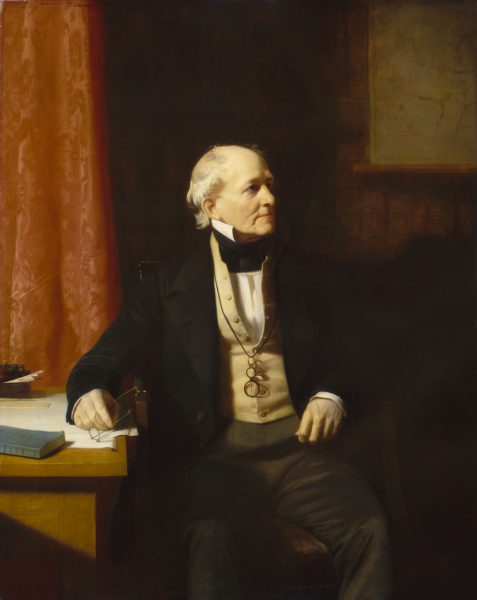 Francis Beaufort was born at Navan, County Meath, Ireland, the son of Daniel Augustus Beaufort, a Protestant clergyman from Navan, well known in the areas of geography and topography, who had published one of the earliest detailed maps of Ireland in 1792. His mother Mary was the daughter and co-heiress of William Waller, of Allenstown House. Francis grew up in Wales and Ireland until age fourteen, when he left school and went to sea, but never stopped his education. By later in life, he had become sufficiently self-educated to associate with some of the greatest scientists and applied mathematicians of his time, including John Herschel,[6] George Biddell Airy,[11] and Charles Babbage.[12]

Naval Service and the Semaphore

Beginning on a merchant ship of the British East India Company, Beaufort rose (during the Napoleonic Wars) to Midshipman, Lieutenant (1796) and Commander (1800). He served on the fifth rate frigate HMS Aquilon during the battle of the Glorious First of June, when Aquilon rescued the dismasted HMS Defence and exchanged broadsides with the French ship-of-the line, Impetueux. When serving on HMS Phaeton, Beaufort was badly wounded leading a cutting-out operation off Málaga in 1800. He received no fewer than 19 wounds on this occasion.[2] While recovering, during which he received a “paltry” pension of £45 p.a., he helped his brother-in-law Richard Lovell Edgeworth to construct a semaphore line from Dublin to Galway, which proved capable of transmitting a message across the whole country from Dublin to Galway in 8 minutes [2]. He spent two years at this activity, for which he would accept no remuneration.[1]

Whereas other wartime officers sought leisurely pursuits, Beaufort spent his leisure time taking soundings and bearings, making astronomical observations to determine longitude and latitude, and measuring shorelines. His results were compiled in new charts. In 1805, he was given his first command on the naval ship H.M.S. Woolwich, and he was assigned a hydrographic survey of the Rio de la Plata estuary in South America, a vast, shallow, featureless waterway some 150 miles long and about as broad at its mouth, full of hazards to navigation.[2] Experts were very impressed by the survey Beaufort brought back.

By the time, Beaufort had been studying Alexander Dalrymple’s ‘Treatise on Navigation’, in which Dalrymple, hydrographer to the East India Company, had included a table of the ‘Velocity and force of wind, according to their common appellations’, which had appeared in a paper read to the Royal Society in 1759 by John Smeaton, [7] engineer, canal-constructor, light-house builder, and rewarded with the society’s Gold Medal. Beaufort’s famous Scale, first drawn up in 1806, is obviously a modification and adaptation for maritime needs of Smeaton’s table. The ‘sea criteria’, showing the gradation of wind from calm to storm, as published in nautical almanacs, are Beaufort’s modification of an idea of Dalrymple’s of a series of drawings illustrating the changing appearance of the sea as the wind grows in strength.[2]

The Beaufort scale as originally drawn up was calibrated to Beaufort’s assessment of the various effects of the wind on a full-rigged man-of-war. Somewhat arbitrarily, he identified 13 states of wind force on his vessel and ranked them 0 to 12. The scale, however, made no reference to the speed of the wind, and various attempts, particularly during the 20th century, have been made to correlate the two.[3]

After the Woolwich, Beaufort received his first post Captain commission, commanding Frederickstein. Throughout 1811–1812, Beaufort charted and explored southern Anatolia, locating many classical ruins. An attack on the crew of his boat by Turks interrupted his work and he received a serious bullet wound in the hip. He returned to England and drew up his charts. In 1817 he published his book Karamania; or a brief description of the South Coast of Asia Minor, and of the Remains of Antiquity.

British Admiralty Hydrographer of the Navy

In 1829 Beaufort was elected as a Fellow of the Royal Astronomical Society, and at age 55, Beaufort was appointed as the British Admiralty Hydrographer of the Navy. He served in that post for 25 years. Beaufort converted what had been a minor chart repository into the finest surveying and charting institution in the world. Some of the excellent charts the Office produced are still in use today.

Beaufort trained Robert FitzRoy,[4] who was put in temporary command of the survey ship HMS Beagle after her previous captain committed suicide. When FitzRoy was reappointed as Commander for what became the famous second voyage of the Beagle, he requested of Beaufort “that a well-educated and scientific gentleman be sought” as a companion on the voyage. Beaufort’s enquiries led to an invitation to Charles Darwin, who later drew on his discoveries in formulating the theory of evolution he presented in his book On the Origin of Species [5].

Beaufort promoted the development of reliable tide tables around British shores, inspiring similar research for Europe and North America. Beaufort retired from the Royal Navy with the rank of Rear Admiral in 1846. Beaufort’s extant correspondence of 200+ letters and journals contained portions written in personal cipher, for which he altered the well known Vigenère cipher, by reversing the cipher alphabet, and the resulting variant is called the Beaufort cipher. Beaufort, like other patrons of exploration, has had his name given to many geographical places, such as e.g.the Beaufort Sea, a marginal sea of the Arctic Ocean, located north of Alaska, and Beaufort Island, an island in Antarctica’s Ross Sea. Sir Francis Beaufort died on 17 December 1857 at age 83.