You are here: Home › astronomy › The Astronomical Achievements of Sir George Biddell Airy 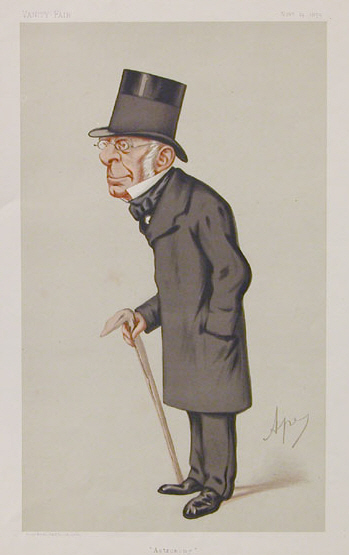 On July 27, 1801, English mathematician, astronomer, and Astronomer Royal George Biddell Airy was born. His many achievements include work on planetary orbits, measuring the mean density of the Earth, a method of solution of two-dimensional problems in solid mechanics and, in his role as Astronomer Royal, establishing Greenwich as the location of the prime meridian.

“It is not simply that a clear understanding is acquired of the movements of the great bodies which we regard as the system of the world, but it is that we are introduced to a perception of laws governing the motion of all matter, from the finest particle of dust to the largest planet or sun, with a degree of uniformity and constancy, which otherwise we could hardly have conceived. Astronomy is pre-eminently the science of order.”
– George Biddell Airy, Popular Astronomy: A Series of Lectures Delivered at Ipswich (1868)

George Biddell Airy showed talents in mathematics very early at school and it is believed that he studied for instance arithmetic, double-entry book keeping and how to use a slide rule. He lived with his uncle for many years, who owned a large library with books on chemistry, biology, optics, as well as mechanics. In 1819, Airy entered Trinity College, Cambridge and graduated as Senior Wrangler in 1823. He was awarded a fellowship at Trinity and became determined to start a position with a decent financial status to be able to marry after unsuccessfully proposing to Richarda Smith, due to his inability to support her. George Biddell Airy was appointed Lucasian Professor of Mathematics at Cambridge only three years after he had graduated from Cambridge. However, his triumph in receiving the position was also followed by a longterm rivalry with Charles Babbage who also applied for the position. He only held the chair for just over a year, however, as he was appointed Professor of Astronomy and “Experimental Philosophy” in February 1828 and became head of the newly built Cambridge Observatory.

George Biddell Airy earned a good reputation as Plumian Professor of Astronomy at Cambridge and Director of the Cambridge Observatory. During his time at Cambridge Airy worked on mathematical, physical and astronomical problems. Among other things, he published papers on the refraction of lens glass (the so-called Airy discs are still used today to assess the quality of telescopes), the formation of rainbows and discovered the astigmatism of the human eye. He calculated the mass of the planet Jupiter and investigated the orbital disturbances of Earth and Venus. The latter work was very important and led to the improvement of astronomical tables. The Royal Astronomical Society awarded him its Gold Medal in 1833. Due to his increased salary, Airy was finally allowed to marry Richarda Smith in 1830. Five years later, Airy became Astronomer Royal and moved to Greenwich where he was for example responsible for the renovation of the observatory’s instruments. [1,2] In Airy’s opinion, the working conditions at the observatory were inadequate, so he reorganized the entire operation. He revised the existing records, secured the basis of a library, had an equatorial telescope installed by Richard Sheepshanks and an observatory for measuring the earth’s magnetic field.

During his academic career, Airy wrote the text ‘On the Algebraic and Numerical Theory of Errors of Observations and the Combinations of Observations‘. Even though it was supposed to be quite hard to read, it possibly influenced Pearson. Further notable works by Airy are ‘Trigonometry‘, ‘Gravitation‘, as well as ‘Partial differential equations‘. George Biddell Airy made major contributions to mathematics and astronomy and improved the orbital theory of Venus and the Moon. The scientist studied interference fringes in optics, and made a mathematical study of the rainbow.  [1,2]

The Density of the Earth

Another of Airy’s research objects was the determination of the mean density of planet Earth. He tackled the problem with the help of pendulums that he made swing on the surface and in the depths. In 1826, he began experiments at the Dolcoath Mine in Cornwall, but the pendulum, which was set up underground, was buried. Another experiment had to be abandoned due to a water ingress. Airy was only able to continue his experiments much later. Another experiment probably took place in 1854 at “Harton Pit”, near South Shields. Airy found out by means of the different oscillation frequencies that the gravitation is greater at a depth of 383 m than on the earth’s surface. For the density of the earth he derived a value of 6.566 g/cm3 (the actual value is 5.515 g/cm3), furthermore he derived a model of isostasia.

Next to his achievements in astronomy, George Biddell Airy was known to be interested in poetry as well as history, theology, architecture and many further subjects. In some fields, he even managed to publish papers including works on Julius Caesar. However, the opinions on Airy’s scientific achievements differ. Some point out Airy’s “failure” to discover planet Neptune. In the 1840s, Airy began to communicate with the French astronomer Urbain Le Verrier over the possibility that irregularities in the motion of Uranus were due to an unobserved body.[5] A few weeks later, he gave the order to systematically search for it in order to secure the triumph for Britain. Unfortunately for Airy however, Johann Gottfried Galle won the race and Airy basically took the blame.[6]

Still, due to his achievements, many see George Biddell Airy as one of the most important scientists of the 19th century. Through Airy’s activities the Royal Greenwich Observatory gained worldwide recognition. From 1872 to 1873 Airy was president of the Royal Astronomical Society. In 1881 he resigned from all official positions. He lived in the “White House” near the observatory until his death in 1892. [2,3]