You are here: Home › biology › Sir David Bruce and the Discovery of the Causative Agent of Malta Fever 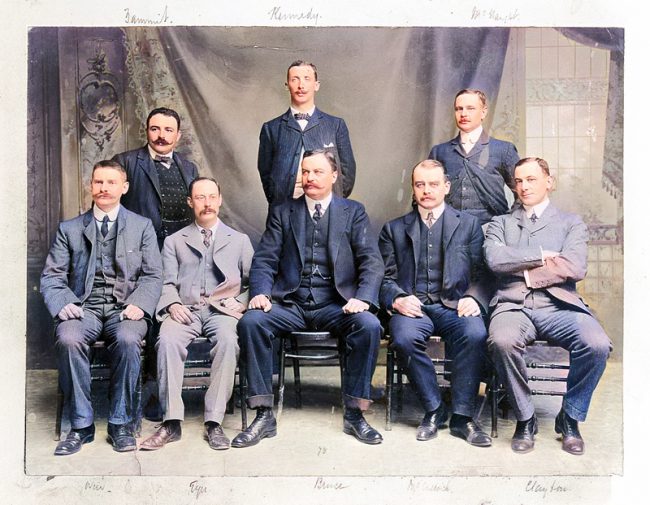 David Bruce (1855 – 1931, centre), with members of the Mediterranean Fever Commission (for brucellosis). Themistocles Zammit is at top left.

On May 29, 1855, Scottish pathologist and microbiologist Sir David Bruce was born. Bruce investigated Malta fever (later called brucellosis in his honour) and African trypanosomiasis (sleeping sickness in humans and nagana in animals). He discovered the first protozoan parasite transmitted by insects, which was later named Trypanosoma brucei after him.

David Bruce – From Australia back to Scotland

David Bruce was born in Melbourne, Australia, to David Bruce, a Scottish engineer and his wife Jane Russell Hamilton, who had emigrated to Australia in the gold rush of 1850. He was an only child. He returned with his family to Scotland at the age of five, where they lived in Stirling, Central Scotland. After visiting Stirling High School, in 1869 he began an apprenticeship for a warehouse firm in Manchester. However, after a bout of pneumonia he re-assessed his career and decided to study zoology but later changed to medicine at the University of Edinburgh in 1876, where he graduated M.B., C.M. in 1881.

In the Army Medical Service

Impressed by Robert Koch’s discovery of the tubercle bacillus, Bruce decided to investigate Malta fever (today also known as Brucellosis), which annually hospitalized many soldiers of the British garrison.[4] The main symptom is fever, often with night sweats, chills and nausea. The fever lasts one to three weeks in acute courses, but is interrupted by fever-free intervals. This has led to the name Febris undulans (“wavelike fever”). In chronic diseases, the fever can also last for months. One third of all patients have swelling of the liver and spleen. Altogether Malta fever was responsible for approximately 120,000 days of disease each year. Investigations showed that the disease was scattered across many different districts of the three islands. The density of the population was one of the highest anywhere in the world, and most families were crowded together in tiny houses. Contaminated water and poor hygiene were blamed for the disease.[2]

The Discovery of Brucella and Goat Milk

Bruce purchased a microscope, and late in 1886 he found “enormous numbers of single micrococci” in the spleen of a fatally ill patient. Splenic pulp from four later patients, inoculated into Koch’s nutrient agar, yielded cultures of a slowly growing “micrococcus.” Bruce reported these findings about the organism, for which he proposed the name Micrococcus melitensis, first in 1887. Its bacillary morphology was unrecognized until Bang isolated Bacillus abortus in 1897. In 1920, on the suggestion of Feusier and Meyer, the generic term Brucella was adopted for these closely related microorganisms. The epidemiology of the disease remained a mystery until 1905, when Themistokles Zammit, a Maltese member of the Commission for the Investigation of Mediterranean Fever, the twelve-man team of experts headed by Bruce, implicated goat’s milk as the disseminating vehicle. The disease was conquered when goat’s milk was eliminated from the diet of the Malta garrison. The eponymous term “brucellosis” has now replaced such names as Malta, Mediterranean, and undulant fever.[1]

In 1889 Bruce returned to England on leave, spending time discoursing in Koch’s laboratory while his wife acquired the latest techniques in microscopy, staining, and media making.[2] Bruce was appointed Assistant Professor of pathology at the Army Medical School in Netley in 1889, and served there for five years. He returned to military field service in 1894 and was posted to Pietermaritzburg, Natal, South Africa. There, he was assigned to investigate the case of cattle and horse sickness (called nagana) in Zululand. In 1900, he joined the army commission investigating dysentery in military camps, at the same time working for the Royal Society’s sleeping sickness expedition.. In 1903, he identified the causative protozoa, and tsetse fly as the vector, of African trypanosomiasis (“sleeping sickness”).

Bruce was elected a Fellow of the Royal Society (FRS) in 1899. He served as a member of the Army Medical Service Advisory Board from 1902 to 1911. In 1914 he became Commander of the Royal Army Medical College, Netley, the position he held until his retirement as a Major-General in 1919. His closest collaborator was his wife, whose name appears on at least 30 of his 172 published papers.[2]  Bruce, who was \knighted in 1908, was created K.C.B. in 1918 and retired in 1919.

David Bruce died four days after his wife in 1931, during her memorial service.