You are here: Home › meteorology › Robert FitzRoy – From Darwin’s famous voyage to Meteorology 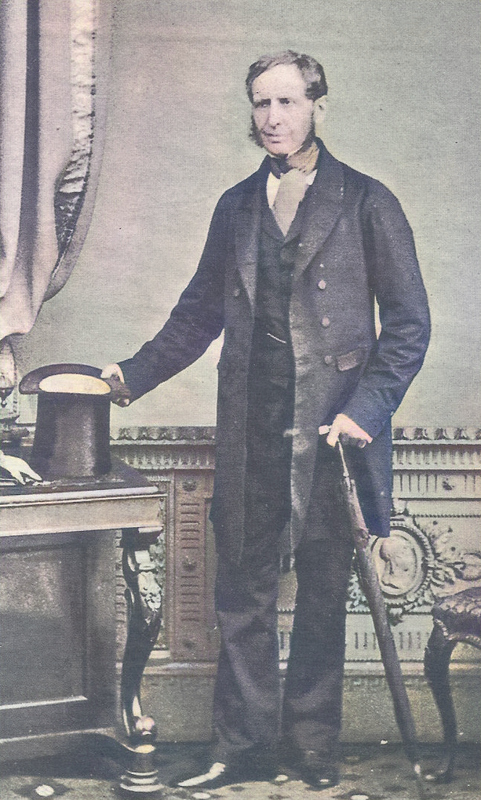 On July 5, 1805, English officer of the Royal Navy Vice Admiral Robert Fitzroy was born. He is best known as the captain of HMS Beagle during Charles Darwin‘s famous voyage, FitzRoy‘s second expedition to Tierra del Fuego and the Southern Cone. Moreover, FitzRoy was a pioneering meteorologist who made accurate daily weather predictions, which he called by a new name of his own invention: “forecasts“.

Robert FitzRoy was born at Ampton Hall, Ampton, Suffolk, England, into British aristocracy to General Lord Charles FitzRoy, being a fourth great-grandson of Charles II of England. From the age of four, Robert FitzRoy lived with his family at Wakefield Lodge, their Palladian mansion in Northamptonshire. In 1818 at the age of 12, FitzRoy entered the Royal Naval College, Portsmouth, and in 1819 he entered the Royal Navy, where he embarked as a voluntary student aboard the frigate HMS Owen Glendower, which sailed to South America. FitzRoy completed his course with distinction and was promoted lieutenant in 1824, having passed the examination with ‘full numbers’ (100%), the first to achieve this result. After serving on HMS Thetis, in 1828 he was appointed flag lieutenant to Rear-Admiral Sir Robert Waller Otway, commander-in-chief of the South American station, aboard HMS Ganges.

Commander of the Beagle

At that time HMS Beagle was carrying out a hydrographic survey of Tierra del Fuego under Captain Pringle Stokes, who became severely depressed and fatally shot himself. Otway appointed FitzRoy as (temporary) Captain of the Beagle on in 1828 and by the ship’s return to England in 1830, FitzRoy had established his reputation as a surveyor and commander. Aftern a brief interlude as Tory candidate for Ipswich and plans for a missionary project to Tierra del Fuego, FitzRoy was re-appointed commander of the Beagle in 1831.

Knowing of the suicides both of Captain Stokes and of his uncle Viscount Castlereagh, FitzRoy was aware of the stressful loneliness of his command and tried to find a suitable gentleman companion for the voyage. Somebody who shared his scientific tastes, who would make good use of the expedition’s opportunities for researching natural history. FitzRoy eventually approved Charles Darwin for the position and before they left England, FitzRoy gave Darwin a copy of the first volume of Charles Lyell‘s Principles of Geology, a book the captain had read that explained terrestrial features as the outcome of a gradual process taking place over extremely long periods. FitzRoy took a request from Lyell to record observations on geological features, such as erratic boulders.[6]

FitzRoy and Darwin got on well together, but there were inevitable strains during the five-year survey voyage. But, none of their quarrels were over religious or doctrinal issues; such disagreements came after the voyage. At Valparaiso in 1834, while Charles Darwin was away from the ship exploring the Andes, the Admiralty reprimanded FitzRoy for buying the schooner Adventure that he had financed out of his own funds to assist with the surveying tasks he had been asked to complete, while being in Valparaiso. He took the criticism badly, selling the schooner and announcing that he would resign his command with doubts about his sanity. The ship’s officers persuaded him to withdraw his resignation and continue as planned once Darwin returned to the ship.

FitzRoy continued his voyage, sailing on to the Galapagos, Tahiti, New Zealand, Australia and South Africa. He detoured to Bahia in Brazil on the return voyage so that he could carry out an additional check, to ensure the accuracy of his longitude measurements before returning to England. After the Beagle’s return in 1836, FitzRoy was awarded a gold medal by the Royal Geographical Society in 1837. FitzRoy wrote his account of the voyage, which was published in May 1839 as the Narrative of the Surveying Voyages of H.M.S. Adventure and Beagle, in four volumes, including Darwin’s Journal and Remarks.

In 1841 FitzRoy was elected the Tory Member of Parliament for Durham. When the first Governor of New Zealand, Captain William Hobson, R.N., died in late 1842, FitzRoy was suggested as his successor. He took up his new task in December 1843. His instructions were to maintain order and protect the Māori, while satisfying the land hunger of the settlers pouring into the country. But owing to his stern attitude towards the settlersin their often unscrupulous dealings with the natives, he became very unpopular and was recalled in 1845.[2] In 1848, he was made superintendent of the Royal Naval Dockyards at Woolwich. In 1850, FitzRoy retired from active service, partly due to ill health. The following year, in 1851, he was elected to the Royal Society.

FitzRoy had always evinced an interest in weather condition and his “Voyages of the Beagle” contains many references to weather phenomena.[2] In 1854, FitzRoy was appointed, on the recommendation of the President of the Royal Society, as chief of a new department to deal with the collection of weather data at sea. His title was Meteorological Statist to the Board of Trade, and he had a staff of three. This was the forerunner of the modern Meteorological Office. A terrible storm in 1859, which caused the loss of the Royal Charter, inspired FitzRoy to develop charts to allow predictions to be made, which he called “forecasting the weather”, thus coining the term “weather forecast”. Fifteen land stations were established to use the new telegraph to transmit to him daily reports of weather at set times. The first daily weather forecasts were published in The Times in 1861.

In 1860, FitzRoy introduced a system of hoisting storm warning cones at the principal ports when a gale was expected. He ordered fleets to stay in port under these conditions. Many fishing fleet owners objected to the posting of gale warnings, which required that fleets not leave the ports. Under this pressure, FitzRoy’s system was abandoned for a short time after his death. The fishing fleet owners reckoned without the pressure of the fishermen, for whom FitzRoy had been a hero, responsible for saving many lives. He also invented a cheap and serviceable barometer, named after him. In 1874, the system was resumed in a simplified form. In 1863 FitzRoy published his “Weather Book,” a text book which was far in advance of the scientific opinion of his time [2].

In 1863 FitzRoy was promoted to Vice-Admiral due to seniority. But in the coming years internal and external troubles at the Meteorological Office, financial concerns as well as failing health, and his struggle with depression took their toll. On 30 April 1865, Vice-Admiral FitzRoy committed suicide by cutting his throat with a razor.