You are here: Home › chemistry › Robert Boyle – The Sceptical Chemist 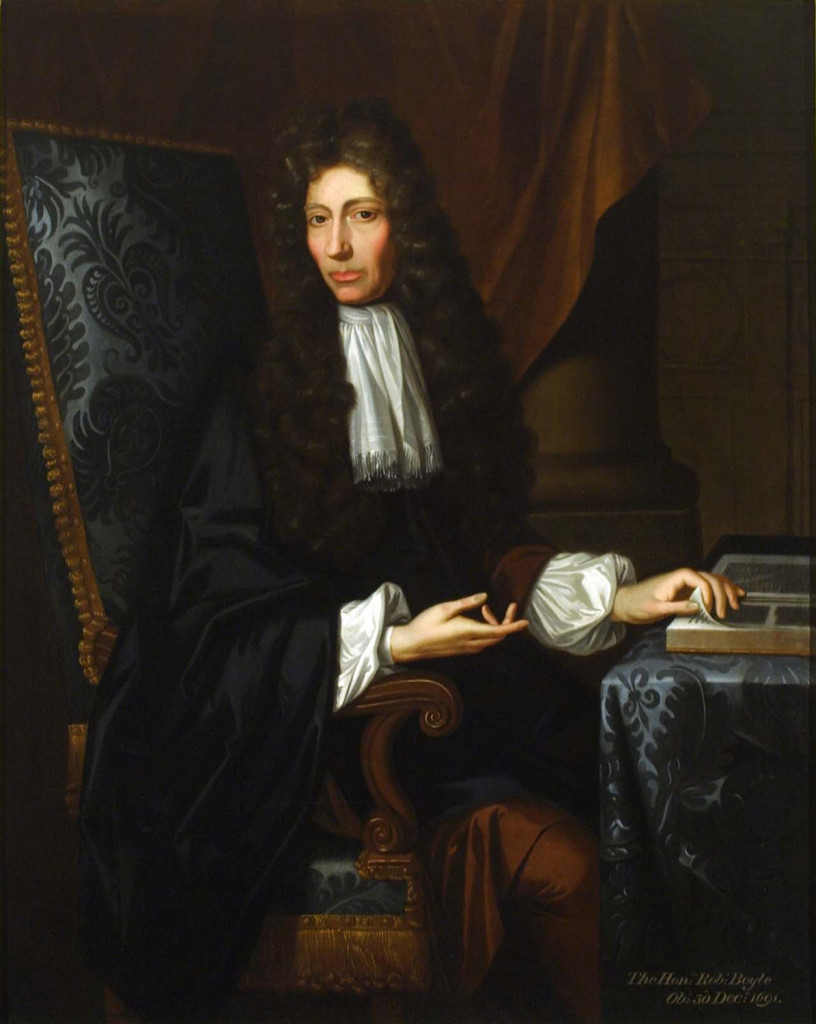 On December 31, 1691, Anglo-Irish natural philosopher, chemist, physicist and inventor Robert Boyle passed away. Boyle is largely regarded today as the first modern chemist, and therefore one of the founders of modern chemistry, and one of the pioneers of modern experimental scientific method. He is best known for Boyle’s law, which describes the inversely proportional relationship between the absolute pressure and volume of a gas, if the temperature is kept constant within a closed system.

“I cannot conceive, how a body, destitute of understanding and sense, truly so called, can moderate and determine its own motions; especially so as to make them conformable to laws that it has no knowledge of.”
— Robert Boyle, A Free Inquiry into the Vulgar Notion of Nature, Sect.1, in The Philosophical Works of the Honourable Robert Boyle (1725)

Robert Boyle was born into one of the wealthiest families in Britain. He was the 14th child of Richard Boyle, the 1st earl of Cork, by his second wife, Catherine, daughter of Sir Geoffrey Fenton, secretary of state for Ireland. Like his elder brothers, he was given to a foster family first, where he already received private tuition in French, Greek and Latin.  At age eight, Boyle began his formal education at Eton College, where his studious nature quickly became apparent. First he learned law, philosophy, mathematics, ancient languages, medicine and theology. He was interested in the natural sciences. In 1639, after three years in Eton, together with his brother Francis, Boyle embarked on a grand tour of the continent. In 1641, he stayed in Florence during the winter, studying the works of Galileo Galilei. In 1644, Boyle returned to England where he began a literary career writing ethical and devotional tracts, some of which employed stylistic and rhetorical models drawn from French popular literature, especially romance writings.[1]

Robert devoted his life to scientific research and soon took a prominent place in the band of enquirers, known as the “Invisible College“, who devoted themselves to the cultivation of the “new philosophy“. They met frequently in London, often at Gresham College and also at Oxford. Boyle spent much of 1652–54 in Ireland overseeing his hereditary lands, and he also performed some anatomic dissections. In 1654 he was invited to Oxford, where he took up residence at the university until 1668. In Oxford he was exposed to the latest developments in natural philosophy and became associated with a group of notable natural philosophers and physicians, including John Wilkins,[13] Christopher Wren [2], and John Locke [3]. 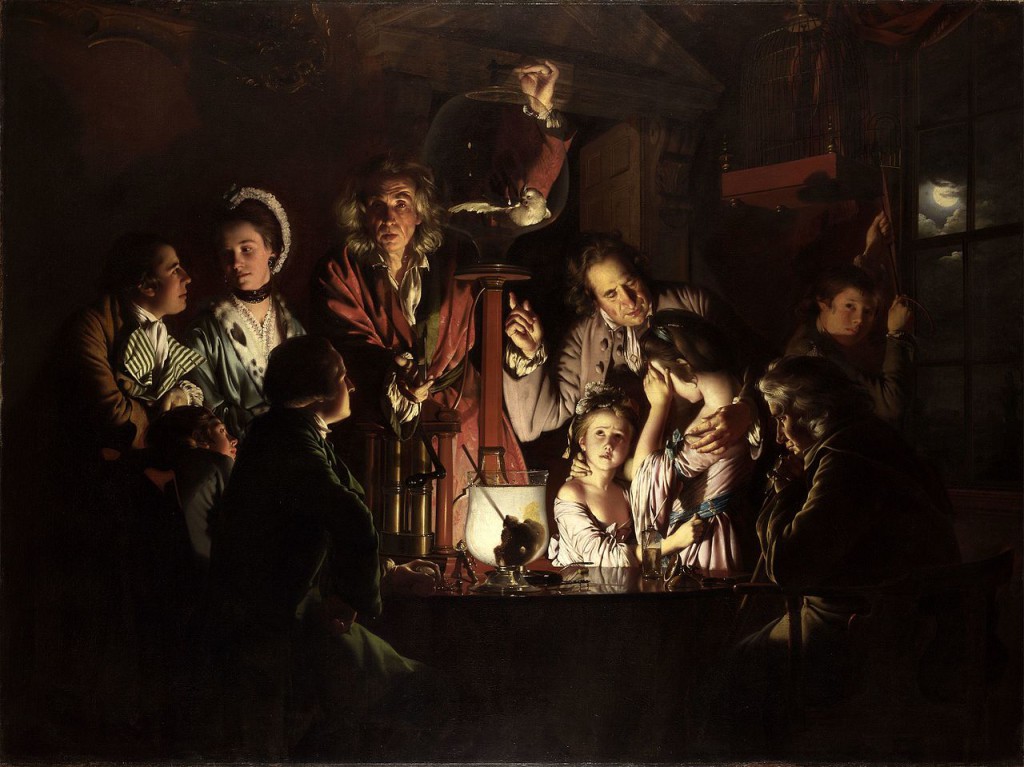 An Experiment on a Bird in the Air Pump, painting by Joseph Wright of Derby (1768), recreating one of Robert Boyle’s air pump experiments.

Reading in 1657 of Otto von Guericke’s air pump [4], he set himself with the assistance of Robert Hooke [5] to devise improvements in its construction, and with the result, the “machina Boyleana” or “Pneumatical Engine“, finished in 1659, he began a series of experiments on the properties of air and published New Experiments Physico-Mechanicall, Touching the Spring of the Air, and its Effects (1660). Boyle’s experiments with the air pump led to a controversy with Thomas Hobbes, which was possibly underpinned by religious politics.[10] Boyle was interested in describing the effects, not the underlying causes. Hobbes demanded that the new knowledge be derived causally and necessarily. According to Hobbes, the mere experimental induction of artificial effects does not lead to true knowledge, since inductive conclusions about the effect on the causes always remain hypothetical. Even Boyles’ argument that his experiments could be repeated at any time could not eliminate Hobbes’ skepticism towards scientific instruments and the falsification of nature caused by them.

The Royal Society of London for Improving Natural Knowledge

In 1663 the Invisible College became The Royal Society of London for Improving Natural Knowledge [6], and the charter of incorporation granted by Charles II of England named Boyle a member of the council. In 1680 he was elected president of the society, but declined the honour from a scruple about oaths. Boyle made a “wish list” of 24 possible inventions which included “the prolongation of life”, the “art of flying”, “perpetual light”, “making armour light and extremely hard”, “a ship to sail with all winds, and a ship not to be sunk”, “practicable and certain way of finding longitudes”, “potent drugs to alter or exalt imagination, waking, memory and other functions and appease pain, procure innocent sleep, harmless dreams, etc.” They are extraordinary because all but a few of the 24 have come true.

Boyle’s scientific work is characterized by its reliance on experiment and observation and its reluctance to formulate generalized theories. He advocated a “mechanical philosophy” that saw the universe as a huge machine or clock in which all natural phenomena were accountable purely by mechanical, clockwork motion. 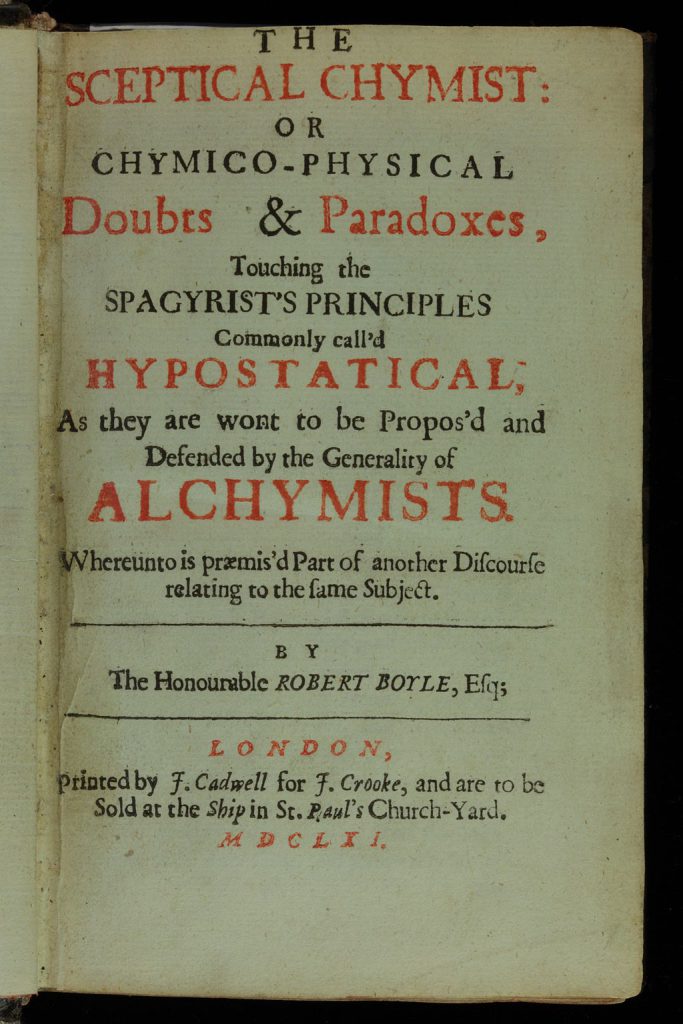 His contributions to chemistry were based on a mechanical “corpuscularian hypothesis”. Instead of defining physical reality and analyzing change in terms of Aristotelian substance and form and the classical four elements of earth, air, fire, and water — or the three Paracelsian elements of salt, sulfur, and mercury — corpuscularism discussed reality and change in terms of particles and their motion.[8] Among his most influential writings were The Sceptical Chymist (1661), which assailed the then-current Aristotelian and especially Paracelsian notions about the composition of matter and methods of chemical analysis, and the Origine of Formes and Qualities (1666), which used chemical phenomena to support the corpuscularian hypothesis. Boyle defined elements as “certain primitive and simple, or perfectly unmingled bodies; which not being made of any other bodies, or of one another, are the ingredients of which all those called perfectly mixt bodies are immediately compounded, and into which they are ultimately resolved.”[8]

Besides being influenced by Epicurean atomism, it was Bacon’s suggestive outlines of the possibilities of an empirically based particulate theory of matter (Novum organum, 1620) which influenced him most, and Descartes’s ambitious outline of a completely mechanistic and logical particulate view of the universe (Principia philosophiae, 1644). From Bacon, he learned to regard heat as a mode of motion of the least particles of matter. Boyle came to the believe that experiment could lead one to demonstrate, and possibly to prove, the existence of such particles, and that it could further aid in the deduction of how the shape and motion of the particles could provide an explanation of the observed properties of bodies.[7]

Boyle’s theories of material change did nothing to eliminate the possibility of the transmutation of base metals to gold that was at the heart of alchemy. Indeed he practiced alchemy until the end of his life, believed that he had witnessed transmutation, and successfully lobbied Parliament to repeal England’s ban on transmutation.[8] Boyle also wrote extensively on natural theology, advocating the notion that God created the universe according to definite laws. Overall, Boyle argued so strongly for the need of applying the principles and methods of chemistry to the study of the natural world and to medicine that he later gained the appellation of the “father of chemistry.”

During the course of his life he sought constantly to improve the lot of humanity. He was interested in the improvement of agricultural methods, in the possibility of extracting fresh water from salt, in the improvement of medicines and medicinal practice, in the possibility of preserving food by vacuum packing, and in a number of other useful results, actual or potential, of experimental philosophy. He viewed his theological interests and his work in natural philosophy as forming a seamless whole and constantly used results from the one area to enlighten matters in the other.[9]