You are here: Home › engineering › The Chronometers of Thomas Earnshaw 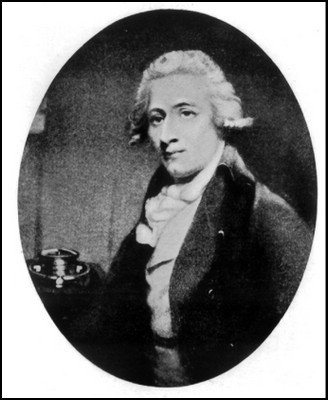 On February 4, 1749, English watchmaker Thomas Earnshaw was born. Earnshaw further simplified the process of marine chronometer production, making them available to the general public. He is also known for his improvements to the transit clock at the Royal Greenwich Observatory in London and his invention of a chronometer escapement and a form of bimetallic compensation balance.

Thomas Earnshaw was born at Ashton under Lyne, Lancashire. He became an apprentice at the age of 14 to William Hughes, watchmaker, of 119 High Holborn in London, and later set up a shop in London. By 1780 Earnshaw had learnt about making escapements and watch jewelling. He turned his attention to improving marine timekeepers, which had been developed by John Harrison. To determine a position on the Earth’s surface, it is necessary and sufficient to know the latitude and longitude.  Until the mid-1750s, accurate navigation at sea out of sight of land was an unsolved problem due to the difficulty in calculating longitude. Navigators could determine their latitude by measuring the sun’s angle at noon. To find their longitude, however, they needed a time standard that would work aboard a ship. Observation of regular celestial motions, such as Galileo’s method based on observing Jupiter’s natural satellites, was usually not possible at sea due to the ship’s motion. The lunar distances method, initially proposed by Johannes Werner in 1514, was developed in parallel with the marine chronometer. The Dutch scientist Gemma Frisius was the first to propose the use of a chronometer to determine longitude in 1530.[6] Earnshaw finalized the form of escapement (the ‘spring deten’) being mounted on a spring instead of on pivots. Whilst initially the design was crude and unsuccessful, with modifications it later became the standard form in marine chronometers, following the invention of the detent escapement by Pierre Le Roy in 1748. Earnshaw showed his new design of escapement to friends of watchmaker John Arnold and Arnold patented a variation of the idea.

William Bligh and the Bounty

In July, 1791, Captain William Bligh purchased on behalf of the Admiralty Earnshaw’s chronometer no. 1503 at a price of 40 Guineas for an expedition he was to command in HMS Providence to transport breadfruit plants from Tahiti to the West Indies. This was the second expedition that Bligh had undertaken with this mission. The first expedition was with HMS Bounty which had ended in the infamous mutiny led by Fletcher Christian and from which Bligh returned to England only with the greatest of difficulties. The second expedition, however, was entirely successful.

Keeping the perfect time is of utmost importance when trying to determine the longitude at sea. Navigators and scientists had been working on the problem of not knowing a ship’s longitude. Thus, the Longitude Act 1714 installed the Board of Longitude with the purpose to administer a scheme of prizes intended to encourage innovators to solve the problem of finding longitude at sea. Even though many tried their hand at winning the main prize, for decades none was able to come up with a practical solution to the problem. The Board recognized that any serious attempt would be based on the recognition that the earth rotates through 15° of longitude every hour. The comparison of time between a known place (e.g., Greenwich) and the local time would determine longitude. Since local apparent time could be determined with some ease, the problem centered on finding a means of determining the time at a known place. It was in the 1740s, when self-educated English carpenter and clockmaker John Harrison succeeded in constructing sufficiently exact marine timekeepers, but they had the disadvantage to be utterly expensive. 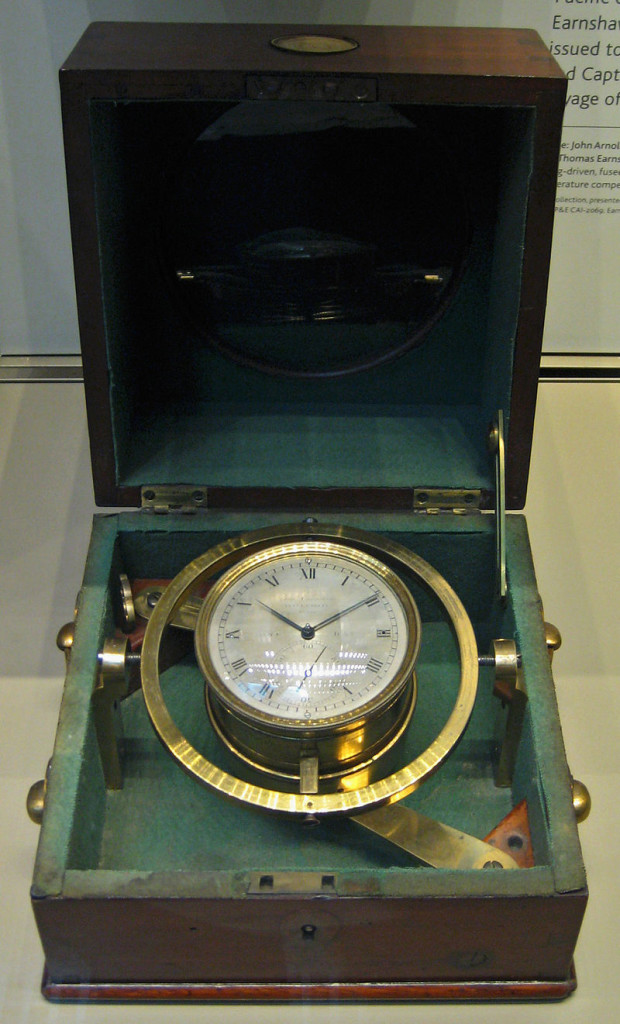 Failing to Earn the Prize

Around 1796 Earnshaw, who had temporarily lost interest in the Board of Longitude reward, was tempted back by the failure of Josiah Emery, a Swiss born London clockmaker and pioneer of the lever escapement, to win it. Earnshaw had a low opinion of Emery’s chronometers and claimed that an already existing chronometer of his, could outperform Emery’s even though it had just returned from a voyage to the West Indies and had not been cleaned. Earnshaw was easily proved right in this and his chronometer had a good average rate over a 12-month trial. However, he failed to win any reward because the method of rating required that the rate of the piece in the first month be used as the baseline for the trial rather than the absolute timekeeping of the instrument.

In June 1801, English navigator and cartographer Matthew Flinders‘ ship, HMS Investigator, carried two boxed Timekeepers by Earnshaw E520 and E543, at a cost of 100 Guineas each. The Investigator also carried two of Arnold’s timekeepers on the first circumnavigation and mapping of the coastline of Australia. The chronometer, E520, is mounted in a wooden box with gimbals to compensate for the motion of the ship. Flinders went to shore regularly to check the settings of the chronometers against the stars. The Earnshaw chronometer was the only one working at the end of the journey, causing Flinders to refer to it in his book A Voyage to Terra Australis as “this excellent timekeeper”.

Finally Sharing the Award with Arnold

In 1805, Earnshaw and John Arnold were granted awards by the Board of Longitude for their improvements to chronometers. Earnshaw received £2500 and John Arnold’s son John Roger Arnold received £1672. The bimetallic compensation balance and the spring detent escapement in the forms designed by Earnshaw have been used essentially universally in marine chronometers since then, and for this reason Earnshaw is generally regarded as one of the pioneers of chronometer development.

The Voyage of the Beagle

Between 1831 and 1836 chronometer no. 506 was carried on HMS Beagle on a voyage to circumnavigate the globe and establish, for the first time, a chain of points around the world of accurately known longitude. The ship was commanded by Captain Robert FitzRoy, a future Vice-Admiral and founder of the Meteorological Office. This was only one of many chronometers carried by the Beagle since great accuracy was required for this task. This was also the voyage that carried Charles Darwin [3] who was afterwards inspired to write his book about the theory of evolution, On the Origin of Species [2,3].