On October 22 (or 23), 1844, French stage actress Sarah Bernhardt was born. She is considered the most famous actress of her time and was one of the first world stars.

“Once the curtain is raised, the actor ceases to belong to himself. He belongs to his character, to his author, to his public.”
– Sarah Bernhardt, as quoted in The Art of the Theatre (1925), p. 171

Sarah Bernhardt was the daughter of Julie Bernhardt, a Jewish Dutch woman and courtesan in Paris. The identity of her father is unknown. She was cared for by a nanny until the age of eight, when she was sent to a boarding school and, at the age of ten, to a convent school in Versailles.

The Duc de Morny, a half-brother of Napoleon III and her mother’s lover at the time, arranged for the 14-year-old to train as an actress at the Comédie-Française; this was considered a privilege. Four years later – she now called herself Sarah Bernhardt – she made her debut with the title role in Iphigénie by Racine.[1] The career threatened to fail after only a few months: After a quarrel with a colleague, Sarah was dismissed and for years could only play insignificant roles on small stages. In 1864, her son Maurice was born in Paris. His father was the Belgian Prince Henri de Ligne, whom she had met in Brussels and who also wanted to marry her, but was prevented from doing so by his family.

Her first great success came in 1868; Sarah Bernhardt played a role in Kean by Alexandre Dumas the Elder [2] at the Odéon, a Paris theater at the Jardin du Luxembourg. During the war with Germany in 1870/71, when all theaters remained closed, she nursed wounded soldiers. After the war, she was able to return to the Comédie Française. Now began a rapid, steep rise. Soon she was the most famous actress of her time, celebrated in France as la voix d’or, “the golden voice,” or la divine, “the divine one.”

An essential part of her artistic work – and a prerequisite for her worldwide fame – was extensive touring. With her own acting company, she appeared in London in 1879. In 1880, a six-month tour of 51 cities in the U.S. followed. In 1881, she gave performances in Russia, Italy, Greece, Hungary, Switzerland, Denmark, Belgium and the Netherlands. England’s Queen Victoria and Russia’s Tsar Alexander III were among her admirers.

In 1882 she married a young attaché to the Greek embassy, Jacques Damala. Damala considered himself talented enough to become an actor and stage partner to his famous wife. Sarah opened her own theater for him under the direction of her son Maurice. The company remained unsuccessful and was soon completely bankrupt, partly because Damala’s Greek accent made him look ridiculous to the audience on stage, and partly because he financed his passion for gambling and his morphine addiction from the theater’s coffers. Still in the year of the wedding, the two separated. After a temporary reconciliation and renewed discord, he died in 1889, at the age of 34, as a result of morphine addiction.

After her husband ruined her financially in 1882, she had to undertake a European tour to make up for the losses. Between 1886 and 1889 new guest performances in the USA followed, then from 1891 to 1893 a world tour. Thus Sarah Bernhardt became a world star, adored throughout Europe and America. As a French nationalist, she refused to perform in Germany. Between tours, she became involved in Paris. In her hometown she directed several theaters where she also performed: from 1893 to 1899 the Théâtre de la Renaissance and from 1899 the former Théâtre des Nations, which she renamed the Théâtre Sarah-Bernhardt and directed until her death (today’s name: Théâtre de la Ville).

A Life of Eccentricities

She was considered an eccentric, often high-spirited and moody woman and had numerous lovers, including the bon vivant Charles Haas, the actor Jean Mounet-Sully, and the painter and illustrator Gustave Doré.[3] Bernhardt created a public image for herself through her eccentricities: she ascended to the skies above France in a Montgolfière and had photographs sold of her lying in a coffin studying her roles or sleeping. Her apartment housed a menagerie of domestic and exotic animals. 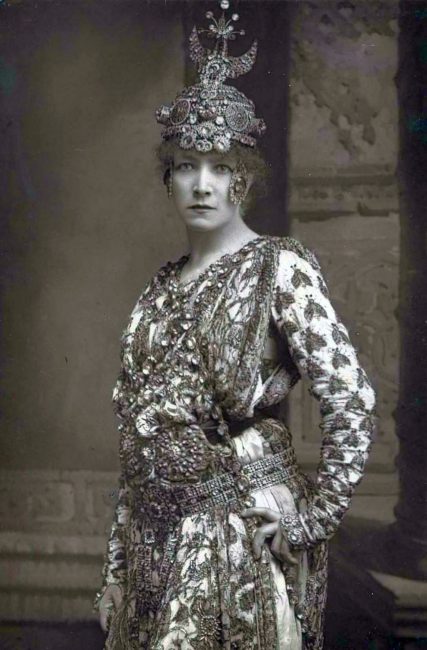 In addition to novels and comedy, she wrote her memoirs (My double life) in 1907. In doing so, she inspired Marcel Proust, who in his novel In Search of Lost Time modeled the character of the actress La Berma after Sarah Bernhardt and the main character Swann after her lover Charles Haas. Besides writing, she also showed talent in painting and sculpture. In 1906 she received a professorship at the Paris Conservatory, and in 1914 she became a member of the French Legion of Honor.

Bernhardt in the title role of Lady of the Camellias, poster by Alphonse Mucha (1896)

In 1905, Bernhardt was forced to jump off a wall on stage in Victorien Sardou‘s La Tosca in Rio de Janeiro, severely injuring her knee. As a result, she suffered pain for years, and because of the late effects of gangrene, her right leg had to be amputated below the hip in 1915. But even after this, the woman, who was provided with a prosthetic leg, did not give up her work. Thus Sarah Bernhardt engaged herself during the First World War in the care of the troops and played behind the front in tents, barns and military hospitals on improvised stages. She even undertook another tour of the United States.

Sarah Bernhardt died in Paris on March 26, 1923. She is buried in the Père Lachaise cemetery in eastern Paris. 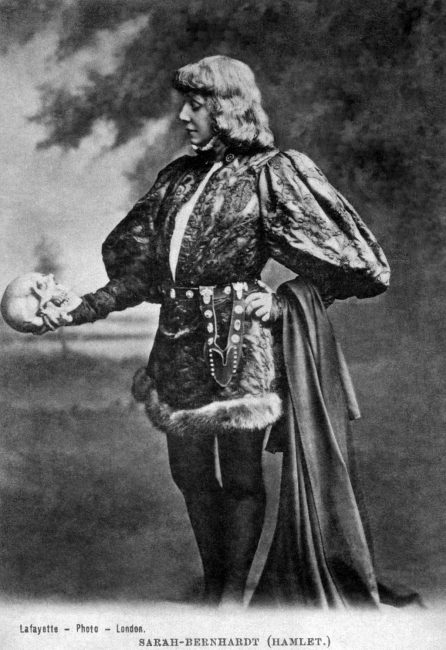 Sarah Bernhardt was praised for her beautiful voice, the grace of her movements and for her temperament. She represented in perfection a theatrical style that was also a thing of the past soon after her time, a romantic style of exuberant declamation and grand gestures. Her gift for emotional acting gave her the opportunity to be convincing as a great tragedienne in classical French dramas as well as in modern society plays. She made triumphant appearances as Phaedra in Jean Racine‘s tragedy of the same name, as well as in the romantic dramas Ruy Blas and as Dona Sol in Hernani by Victor Hugo.[4] Her presentation of male roles was admired and marveled at. In 1896, for example, she played the title role in the drama Lorenzaccio by Alfred de Musset and George Sand,[5] in 1899 Hamlet in Shakespeare’s tragedy of the same name, and in 1901 the Duke of Reichstadt in L’Aiglon (“The Young Eagle“); Edmond Rostand had written this play about Napoleon’s son especially for her.

Bernhardt in the title role of Lorenzaccio, poster by Alphonse Mucha (1896)

The Lady of the Camelias

The central role of her life, however, was that of the Lady of the Camellias in the play by Alexandre Dumas the Younger. Sarah Bernhardt played the title role again and again from 1880 onward, even into old age. The painter and poster artist Alfons Mucha,[6] with whom she had worked since 1894, created a poster for Sarah Bernhardt as the Lady of the Camellias in 1896 that is often regarded as one of the early high points of Art Nouveau graphics.