You are here: Home › art › The Decorative Art of Alphonse Mucha 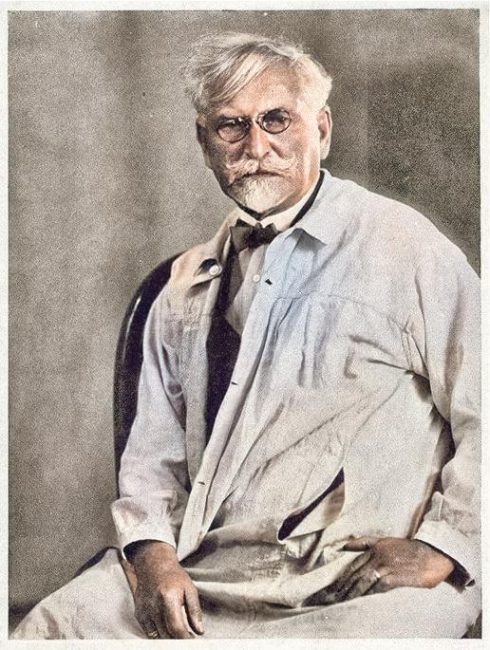 On July 24, 1860, Czech Art Nouveau painter and decorative artist Alphonse Mucha was born. Mucha is known best for his distinct style. He produced many paintings, illustrations, advertisements, postcards, and designs. So many, that for sure you will know one of his designs that have become an Art Nouveau icon.

Alphonse Maria Mucha was born in the town of Ivančice, Moravia, the son of a local court usher and his second wife, a former governess. His mother wanted him to join the priesthood; his father hoped he would find some form of remunerative employment.[3] In 1871, Mucha became a chorister at the Cathedral of St. Peter and Paul, Brno, where he received his secondary school education. It is there that he had his first revelation, in front of the richness of Baroque art. During the four years of studying there, he formed a friendship with Leoš Janáček who would become the greatest Czech composer of his generation. He worked at decorative painting jobs in Moravia, mostly painting theatrical scenery. In 1879, he relocated to Vienna to work for a major Viennese theatrical design company, while informally augmenting his artistic education. When a fire destroyed his employer’s business during 1881 he returned to Moravia, to do freelance decorative and portrait painting. Count Karl Khuen of Mikulov hired Mucha to decorate Hrušovany Emmahof Castle with murals and was impressed enough that he agreed to sponsor Mucha’s formal training at the Munich Academy of Fine Arts. In 1885 he sat the entrance examination and was admitted as a third-year student.[3]

Mucha moved to Paris in 1887, but spoke not a word of French when he arrived. Nevertheless, he continued his studies at Académie Julian and Académie Colarossi. In addition to his studies, he worked at producing magazine and advertising illustrations. About Christmas 1894, Mucha happened to go into Lemercier’s print shop where there was a sudden and unexpected need for a new advertising poster for a play featuring Sarah Bernhardt, the most famous actress in Paris, at the Théâtre de la Renaissance on the Boulevard Saint-Martin. Attendances had been flagging and a boost was needed to revive it in the New Year. As it was a holiday period, all Lemercier’s regular poster artists were away.[3] Mucha volunteered to produce a lithographed poster within two weeks, and on 1 January 1895, the advertisement for the play Gismonda by Victorien Sardou was posted in the city, where it attracted much attention. Actually, famous actress Sarah Bernard loved the work, and soon tied him into a contract with her to design not only posters, theatre cards and programmes, but also costumes and stage sets – a collaboration that often extended to the whole production. Mucha’s work was a huge success. Crowds gathered around each poster, and collectors bribed the poster men to keep one for them, or attempted to cut them off the hoardings.[3] 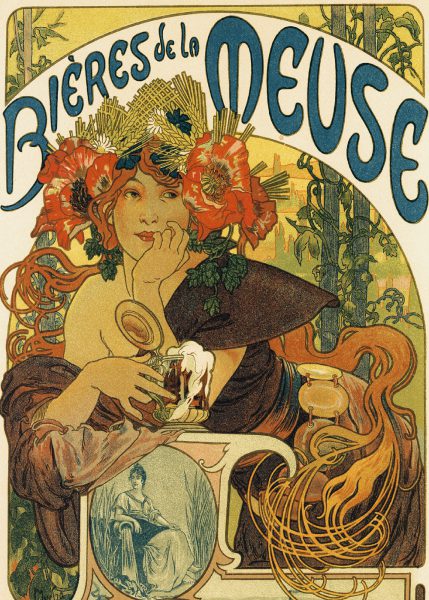 Mucha produced a flurry of paintings, posters, advertisements, and book illustrations, as well as designs for jewelry, carpets, wallpaper, and theatre sets in what was termed initially The Mucha Style but became known as Art Nouveau . Mucha’s works frequently featured beautiful young women in flowing, vaguely Neoclassical-looking robes, often surrounded by lush flowers which sometimes formed halos behind their heads. His supple, fluent draftsmanship is used to great effect in his posters featuring women. His fascination with the sensuous aspects of female beauty—luxuriantly flowing strands of hair, heavy-lidded eyes, and full-lipped mouths—as well as his presentation of the female image as ornamental, reveal the influence of the English Pre-Raphaelite aesthetic on Mucha, particularly the work of Dante Gabriel Rossetti.[2] In contrast with contemporary poster makers he used pale pastel colors. Mucha’s style was given international exposure by the 1900 Universal Exhibition in Paris, where he decorated the Bosnia and Herzegovina Pavilion and collaborated with decorating the Austrian Pavilion. His Art Nouveau style was often imitated. The Art Nouveau style, however, was one that Mucha attempted to disassociate himself from throughout his life; he always insisted that rather than maintaining any fashionable stylistic form, his paintings were entirely a product of himself and Czech art.

Together with his wife Maruška, Mucha visited the U.S. from 1906 to 1910, where he expected to earn money to fund his nationalistic projects to demonstrate to Czechs that he had not “sold out”. After returning to Czech, he settled in Prague, where he decorated the Theater of Fine Arts, contributed his time and talent to create the murals in the Mayor’s Office at the Municipal House, and other landmarks around the city. When Czechoslovakia won its independence after World War I, Mucha designed the new postage stamps, banknotes, and other government documents for the new state. Mucha spent many years working on what he considered his life’s fine art masterpiece, The Slav Epic , a series of twenty huge paintings depicting the history of the Czech and the Slavic people in general, bestowed to the city of Prague in 1928. The rising tide of fascism during the late 1930s resulted in Mucha’s works and his Slavic nationalism being denounced in the press as ‘reactionary’. 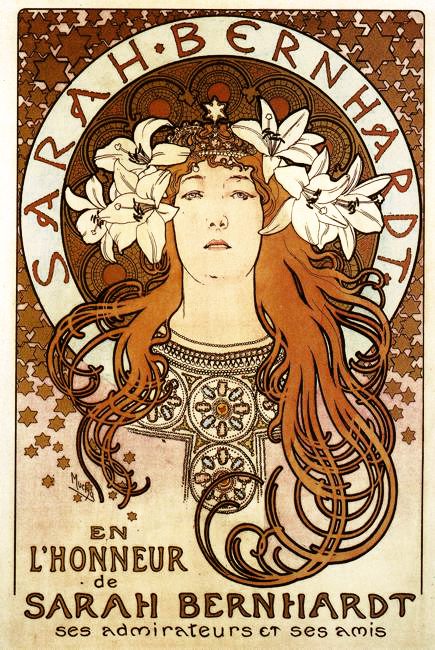 When German troops moved into Czechoslovakia in 1939, Mucha was among the first persons to be arrested by the Gestapo. During his interrogation, the aging artist became ill with pneumonia and died in Prague on 14 July 1939, aged 78