You are here: Home › literature › The Scandalous Love Affairs of George Sand 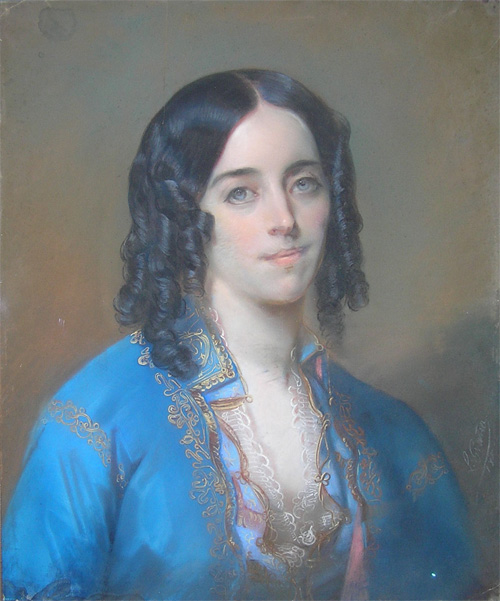 On July 1, 1804, French novelist and memoirist Amantine-Lucile-Aurore Dupi better known under her pseudonym George Sand was born. She was one of the most successful female writers of the nineteenth century, but equally well known for her much publicized romantic affairs with a number of artists, including the composer and pianist Frédéric Chopin and the writer Alfred de Musset.

“I have an object, a task, let me say the word, a passion. The profession of writing is a violent and almost indestructible one.”
— George Sand, Letter to Jules Boucoiran, (4 March 1831)

Growing up as Aurore

Always known simply as Aurore, she was born in Paris, but raised for much of her childhood by her grandmother, Marie-Aurore de Saxe, Madame Dupin de Francueil, at her grandmother‘s estate, Nohant, in the French province of Berry. There she gained the profound love and understanding of the countryside that were to inform most of her works. In 1817 at the age of fourteen, Aurore was sent to the convent of the Dames Augustines Anglaises in Paris. Though she was of a rebellious character, she also felt drawn to quiet, deep thought and direct communication with God. But, her grandmother called her to her home again, where Aurore studied nature, read from the philosophers of all ages, and developed a passion for the works of French writer François René Chateaubriand (1768 – 1848).

In 1822, George Sand married Casimir Dudevant, illegitimate son of Baron Jean-François Dudevant, with whom she had two children. In early 1831, she left her husband and entered upon a four- or five-year period of romantic rebellion, before she was rightfully divorced in 1835. For her first independently written novel, Indiana (1832), she adopted the pen name that made her famous – George Sand. That novel, which brought her immediate fame, is a passionate protest against the social conventions that bind a wife to her husband against her will and an apologia for a heroine who abandons an unhappy marriage and finds love.

Sand conducted affairs of varying duration with Jules Sandeau (1831), Prosper Mérimée, Alfred de Musset (summer 1833 – March 1835), Louis-Chrysostome Michel, Pierre-François Bocage, Félicien Mallefille, Louis Blanc, and Frédéric Chopin (1837–1847). Later in life, she became close friend with Gustave Flaubert despite their obvious differences in temperament and aesthetic preference. She also engaged in an intimate friendship with actress Marie Dorval, which led to widespread but unconfirmed rumors of a lesbian affair. However, she remained impervious to Musset’s skeptical views and Chopin’s aristocratic prejudices, while the man whose opinions she adopted wholeheartedly, the philosopher Pierre Leroux, was never her lover.[1]

Drawing from her childhood experiences of the countryside, Sand wrote several pastoral novels. Every night from midnight until dawn, George Sand covered her daily quota of twenty pages with her large, tranquil writing, never crossing out a line. All her novels are love stories in which her romantic idealism unfolds in a realistic setting: love transcending the obstacles of convention and class.[2] 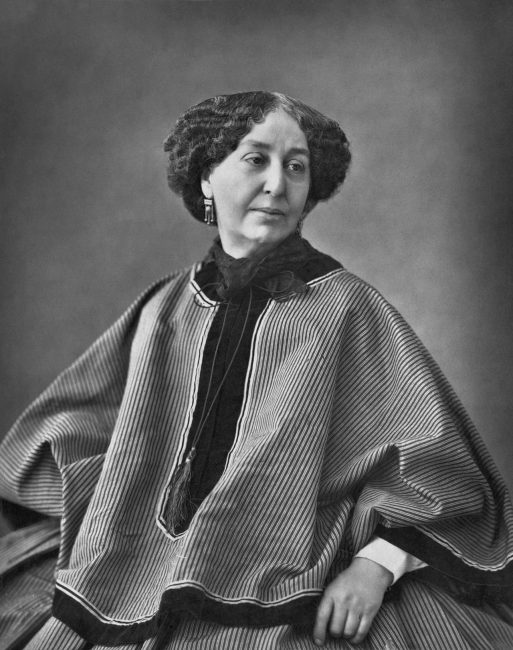 The Winter with Chopin

In Majorca one can still visit the former Carthusian monastery of Valldemossa, where she spent the winter of 1838–1839 with Chopin and her children, which she later published in her Un hiver à Majorque (A Winter in Majorca, 1841). Chopin was already ill with incipient tuberculosis at the beginning of their relationship, and spending a winter in Majorca—where Sand and Chopin did not realize that winter was a time of rain and cold, and where they could not get proper lodgings—exacerbated his symptoms. They separated two years before his death for a variety of reasons. In her novel Lucrezia Floriani, Sand used Chopin as a model for a sickly Eastern European prince named Karol. In 1849, Chopin died penniless in Paris at the Place Vendôme in the following year. His friends had to pay for his funeral that was attended by over 3,000 people, including Eugène Delacroix, Franz Liszt, Victor Hugo and other famous people. George Sand, however, was notable by her absence.

Sand was also known for her implication and writings during the Paris Commune, where she took a position for the Versailles assembly against the communards, urging them to take violent action against the rebels. In addition, Sand authored literary criticism and political texts. She wrote many essays and published works establishing her socialist position. Because of her early life, she sided with the poor and working class as well as women‘s rights. George Sand died at Nohant, near Châteauroux, in France‘s Indre département on 8 June 1876, at the age of 71.

George Sand is also renown for breaking the society conventions of her age, by wearing men‘s clothing in public, which she justified by the clothes being far sturdier and less expensive than the typical dress of a noblewoman at the time. In addition to being comfortable, Sand‘s male dress enabled her to circulate more freely in Paris than most of her female contemporaries, and gave her increased access to venues from which women were often barred, even women of her social standing. Also scandalous was Sand‘s smoking tobacco in public. These and other behaviors were exceptional for a woman of the early and mid-19th century, when social codes—especially in the upper classes—were of the utmost importance.