You are here: Home › history › Adventure Time with Alexandre Dumas 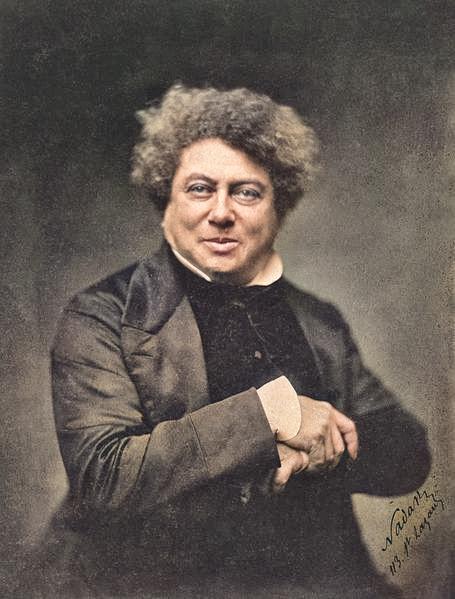 On July 24, 1802, French writer Alexandre Dumas, also known as Alexandre Dumas, père, was born. He is best known for his historical novels of high adventure. Translated into nearly 100 languages, these have made him one of the most widely read French authors in history.

The Master of the Musketeers

Alexandre Dumas’ novels have all become popular icons. Think of his ‘Three Musketeers‘, I really don’t know how many versions I saw of this story in the movies. Interestingly, the story does never fade in its popularity, as there have been again remakes very recently. Every generation of readers or movie enthusiasts seems to ‘rediscover’ Dumas’ adventures again and again. Actually, his novels have been adapted since the early twentieth century for nearly 200 films. One for all, and all for one, has become a famous quotation. And Dumas also was an early adopter of the concept of serials. The popularity and success of his Musketeers made him write two more sequels.

The Son of a General

Dumas Davy de la Pailleterie (later known as Alexandre Dumas) was born in Villers-Cotterêts, a little village just outside Paris, as son of general Thomas-Alexandre Davy de la Pailleterie, who was a descendant of a French nobleman and a black slave woman from Saint-Domingue.[5] Alexandre’s father had fallen out of favor and left the military service in 1800. His health was ruined after 2 years imprisonment as prisoner of war in Naples and in 1806, he died of cancer. His widowed mother could not provide her son with much of an education. However, Alexandre read everything he could and taught himself Spanish. His mother’s stories of his father’s bravery during the campaigns of the Revolutionary Wars inspired the boy’s vivid imagination. In 1822, after the restoration of the French monarchy, 20-year old Alexandre moved to Paris and acquired a position at the Palais Royal in the office of Louis-Philippe, Duke of Orléans.

“My father was a mulatto, my grandfather was a Negro, and my great-grandfather a monkey. You see, Sir, my family starts where yours ends.”
(Alexandre Dumas’ famous response to a man, who insulted him because of his African ancestry)

The Industrialization of Writing

Dumas began writing articles for magazines and plays for the theatre. The success of his first two plays in 1829 him sufficient income to write full-time. After the 1830 revolution his former employer became King Louis-Philippe, the Citizen King, and the French nation began to industrialize. Now, Dumas switched to writing novels. Although attracted to an extravagant lifestyle and always spending more than he earned, Dumas proved to be an astute marketer. As newspapers were publishing many serial novels, in 1838 Dumas rewrote one of his plays as his first serial novel, Le Capitaine Paul. He founded a production studio, staffed with writers who turned out hundreds of stories, all subject to his personal direction, editing and additions. From 1839 to 1841, Dumas, with the assistance of several friends, compiled Celebrated Crimes, an eight-volume collection of essays on famous criminals and crimes from European history.

“It is by his courage, please observe, by his courage alone, that a gentleman can make his way nowadays. Whoever hesitates for a second perhaps allows the bait to escape which during that exact second fortune held out to him. You are young. You ought to be brave for two reasons: the first is that you are a Gascon, and the second is that you are my son. Never fear quarrels, but seek adventures. I have taught you how to handle a sword; you have thews of iron, a wrist of steel. Fight on all occasions.” (Alexandre Dumas, from The Three Musketeers, Chapter 1) 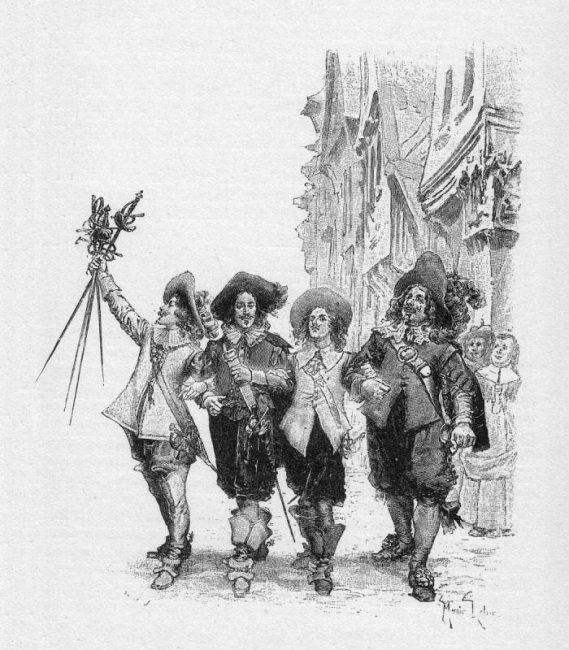 The Three Musketeers by Alexandre Dumas (illustration of the Appleton edition, 1894).

The Count of Monte Christio

In his style of working Dumas depended on numerous assistants and collaborators. One of the most important assistants was Auguste Maquet, who is known to have outlined the plot of The Count of Monte Cristo, and made substantial contributions to The Three Musketeers and its sequels. They had a remarkable efficient way of collaboration: Maquet was to propose plots and write drafts. Dumas added the details, dialogues, and the final chapters. Unfortunately, Maquet never made it on the cover of Dumas’ novels as co-author. The Count of Monte Cristo, first serialized in the weekly Journal des débats was also a huge literary and financial success for Dumas.

“Tell the angel who will watch over your future destiny, Morrel, to pray sometimes for a man who, like Satan, thought himself, for an instant, equal to God; but who now acknowledges, with Christian humility, that God alone possesses supreme power and infinite wisdom… There is neither happiness nor misery in the world; there is only the comparison of one state with another, nothing more. He who has felt the deepest grief is best able to experience supreme happiness. We must have felt what it is to die, Morrel, that we may appreciate the enjoyments of life.” (Alexandre Dumas, from The Count of Monte Christo, Chapter 117)

The popularity of Dumas’ novels earned him a great deal of money, but he was frequently insolvent, as he spent lavishly on women and sumptuous living. Overall, Dumas published writings come to a total of incredible 100,000 pages in his lifetime. After King Louis-Philippe was ousted in a revolt, Louis-Napoléon Bonaparte was elected as president. But, as Bonaparte disapproved of the author, in 1851 Dumas fled to Brussels, Belgium, which was also an effort to escape his creditors. In 1859, he moved on to Russia, where his writings were enormously popular and he stayed there for almost two years publishing travel books about Russia. In March 1861 the kingdom of Italy was proclaimed, with Victor Emmanuel II as its new king. For the next three years, Dumas participated in the movement for Italian unification and founded a newspaper, Indipendente. Returning to Paris in 1864, he – of course – published travel books about Italy. On December 5, 1870, Alexandre Dumas died in poverty at his son’s villa in Puys, near Dieppe. Dumas’ son, Alexandre Dumas fils, is remembered today chiefly for his first novel, The Lady of the Camellias, which was the basis for the libretto of Verdi’s opera La Traviata.

Dream and Nuance in Alexandre Dumas’ “The Count of Monte Cristo”, [10]