You are here: Home › botany › Theophrastus of Eresos – the Father of Botany 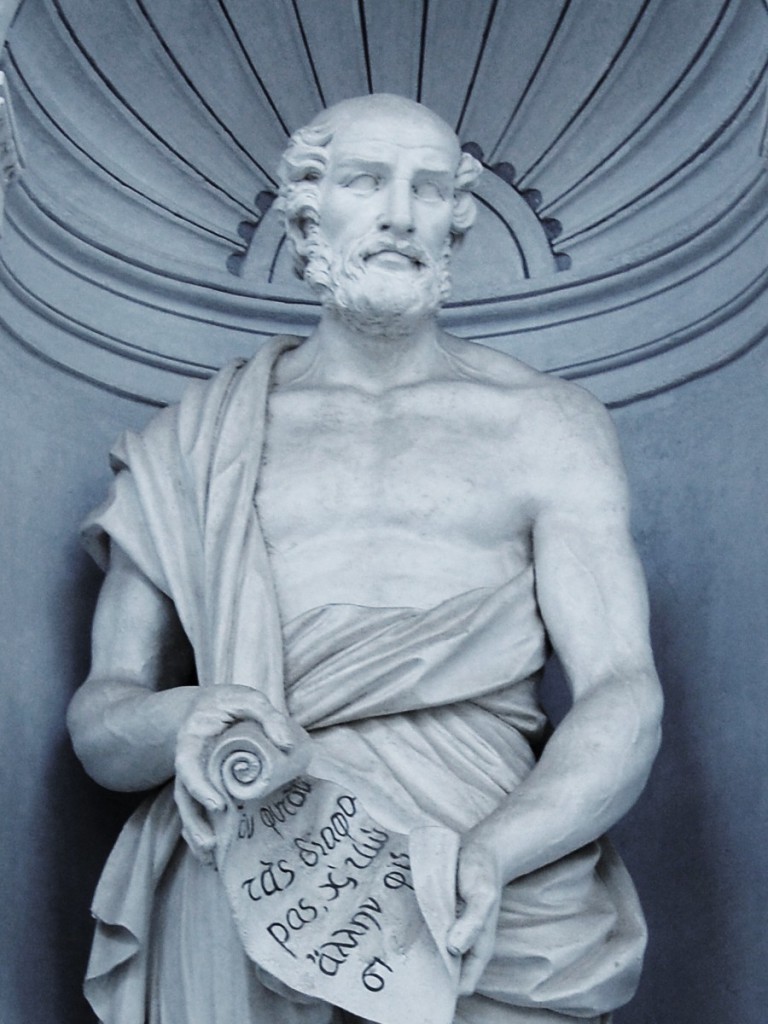 Theophrastus of Eresos, who studied in Plato‘s philosopher’s school, is most famous for his groundbreaking work on plants. Thus, he is often referred to as the ‘father of botany‘. His two surviving botanical works, Enquiry into Plants (Historia Plantarum) and On the Causes of Plants, were an important influence on Renaissance science.

The Life of Theophrastus

Theophrastus of Eresos was a native of Eresos in Lesbos and his given name was Tyrtamus. It is believed that he was educated in philosophy in Lesbos from one Alcippus, later he moved to Athens, where he may have studied under Plato. Further, it is assumed that he became friends with Aristotle and may have joined Aristotle in his self-imposed exile from Athens. It seems that it was on Lesbos that Aristotle and Theophrastus began their research into natural science, with Aristotle studying animals and Theophrastus studying plants. According to Strabo he was originally called Tyrtamos and was given the name Theophrastos by Aristotle. It was also through Aristotle, that Theophrastus began teaching in the Lyceum. Theophrastus also stayed head of the Peripatetic school after Aristotle’s death in 322/1. Theophrastus presided over the Peripatetic school for thirty-five years, and died at the age of eighty-five according to Diogenes. It is believed that the school as well as Theophrastus became very popular. At one period, it is said, there were more than 2000 students, among them the comic poet Menander. After his death, Theophrastus was honored with a public funeral, and “the whole population of Athens, honoring him greatly, followed him to the grave.”

“The Unseasonable man is one who will go up to a busy person, and open his heart to him. He will serenade his mistress when she has a fever. He will address himself to a man who has been cast in a surety-suit, and request him to become his security. He will come to give evidence when the trial is over.”
– Theophrastus, Characters

Theophrastus is the author of about 200 writings of dialectical, metaphysical, moral and physical content and on logic, some of which are natural-historical and philosophical and some of which contain fragments from larger works. His historical writing on the doctrines of the pre-Socratic natural philosophers, physikon doxai, is lost. Theophrast lived to the age of 85 and, according to a report by Diogenes Laertius – probably meant ironically – died of “slackening zeal for work.” As evidenced by an ancient boundary stone, Theophrast was given a garden plot by his student Demetrios of Phaleron, which is now part of the National Garden in Athens. In the garden there was also a sanctuary and a library

Theophrastus did not so much develop his own philosophy as he critically adopted Aristotle’s teleology. While Aristotle still considered the causa finalis as the first cause (prima causa), it can be observed in Theophrast’s metaphysics that with him a shift towards the causa efficiens takes place. The main difference to the ontology of Aristotle (and to that of Plato) is that non-purposeful but nevertheless regular natural phenomena, e.g. nipples in male creatures, are assumed to be caused by the causa efficiens. Overall, the surviving writings present a picture of a much more moderate teleology, with the writing on fatigue (peri kopon) even seeming mechanistic. Theophrast’s turn to an understanding of causality that resembles the modern one more than the Aristotelian one explains why, on the one hand, there was the adoption of a more materialistic mentality by the Epicureans, and on the other hand, rejection by the Stoics, who referred to Heraclitus.[3]

Theophrastus seems to have carried out still further the grammatical foundation of logic and rhetoric, since in his book on the elements of speech, he distinguished the main parts of speech from the subordinate parts, and also direct expressions (κυρία λέξις kuria lexis) from metaphorical expressions, and dealt with the emotions (πάθη pathe) of speech. He further distinguished a twofold reference of speech (σχίσις schisis) to things (πράγματα pragmata) and to the hearers, and referred poetry and rhetoric to the latter.

The Father of Botany

Two of the most important of his books are two large botanical treatises, Enquiry into Plants, and On the Causes of Plants, which constitute one of the most important contribution to botanical science during antiquity and the Middle Ages. Theophrastus probably published the first systemization of the botanical world and that is why he has been regarded as the ‘father of botany‘ by his followers. 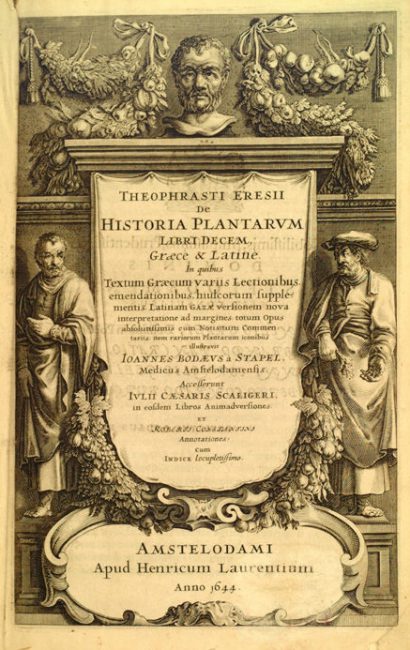 The Enquiry into Plants is arranged into a system whereby plants are classified according to their modes of generation, their localities, their sizes, and according to their practical uses such as foods, juices, herbs, etc. On the Causes of Plants deals with the growth of plants, the influences on their fecundity, the proper times they should be sown and reaped, the methods of preparing the soil, manuring it, and the use of tools. Also, Theophrastus described the smells, tastes, and properties of many types of plants. The scientist was able to detect the process of germination and realized the importance of climate and soil to plants. Much of the information on the Greek plants may have come from his own observations, as he is known to have travelled throughout Greece, and to have had a botanical garden of his own.

Theophrastus is considered to be the first scholar who seriously dealt with tree and wood science. The historical background to his time was an acute shortage of wood in Athens after Alexander the Great had banned the export of strong woods from Macedonia. As a result, the Athenian government no longer had enough shipbuilding lumber to expand its fleet, which eventually cost it dominion over the Aegean sea trade routes. In his natural history of plants, Theophrastus – based less on his own investigations, however, and more on reports from farmers, travelers, woodcutters, and charcoal burners – deals primarily with questions of wood technology and wood utilization, but also with the science of location.