You are here: Home › mathematics › Richard Dedekind and the Real Numbers 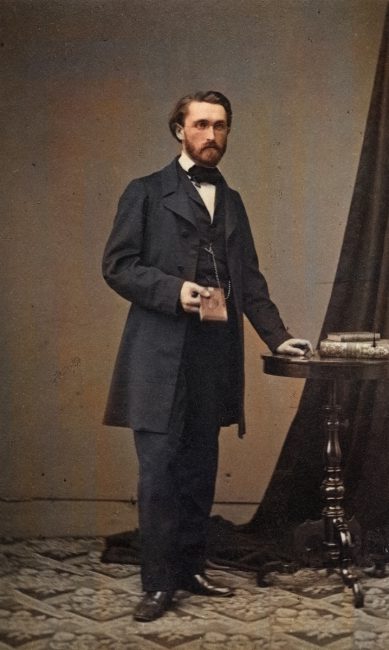 On October 6, 1831, German mathematician Julius Wilhelm Richard Dedekind was born. He is known for making important contributions to abstract algebra (particularly ring theory), algebraic number theory and the foundations of the real numbers.

“Numbers are the free creation of the human mind.” Richard Dedekind

Richard Dedekind, the son of the Braunschweig lawyer and university teacher Julius Dedekind, attended the Martino-Katharineum Braunschweig and studied mathematics at the Collegium Carolinum there from 1848. He continued his studies from 1850 in Göttingen, where he received his doctorate in 1852 after only four semesters with Carl Friedrich Gauss as his last student on the theory of Euler integrals.[3] However, he mainly studied mathematics with Moritz Abraham Stern and Georg Ulrich at the mathematical-physical seminar that Stern had just established, and physics with Wilhelm Weber and Johann Benedict Listing. With Gauss he heard in the winter semester 1850/51 about the method of least squares, which Dedekind remembered as one of the most beautiful lectures he ever heard, and in the following semester about higher geodesy.

However, Dedekind preferred to continue his studies at the University of Berlin, which was known to have the best reputation in the field of mathematics. There, he was awarded the habilitation and returned to Göttingen shortly after, where he was appointed Privatdozent of geometry and probability. It is assumed that Dedekind was the first to teach Galois’ theory and to understand the notion of groups in algebra and arithmetic. After a short period of teaching in Zurich, Switzerland, Dedekind returned to his native Braunschweig where he spent the rest of his working career, because the Collegium Carolinum was upgraded to an Institute of Technology. [1]

“What is provable is not to be believed without proof in science.”
– Richard Dedekind, Was sind und was sollen die Zahlen? (1888)

One of Dedekind’s best known contributions to mathematics is the ‘Dedekind cut‘. The idea behind a cut is that an irrational number divides the rational numbers into two classes, with all the members of one class being strictly greater than all the members of the other class. His thought on irrational numbers and Dedekind cuts was published in his pamphlet “Continuity and irrational numbers”, in modern terminology better known as completeness. In the later 1870s, Dedekind began his first works fundamental to ring theory, even though the term ‘ring‘ never appeared in his writings. Dedekind defined an ideal as a subset of a set of numbers, composed of algebraic integers that satisfy polynomial equations with integer coefficients. The concept underwent further development in the hands of Hilbert and, especially, of Emmy Noether. [2,4]

In 1888 Richard Dedekind gave the first exact introduction of the natural numbers by axioms in the paper Was sind und was sollen die Zahlen? (What are and what should be the numbers). In the appendix of the number theory of his teacher Dirichlet, he presented his construction of the ideal theory, which at that time was in competition with that of Leopold Kronecker.[5] The Dedekind rings and further the Dedekind η-function in the theory of modular forms, the Dedekind ζ-function of an algebraic number field, the Dedekind complementary modulus, Dedekind number, Dedekind sums as well as the terms “Dedekind-infinity” and “Dedekind-finity” are named after him.  Dedekind played an essential role in the elaboration of abstract algebra. The algebraic notion of ring was introduced by Dedekind, as well as unity and the notion of “field”. Dedekind was furthermore a pioneer of group theory: In his lectures of 1855/56 he gave the first modern exposition of Galois theory (which, along with transformation groups in geometry and along with number theory as the third root, was important for the formation of the notion of group in the 19th century) with introduction of the abstract group notion as automorphism group of field extensions. In 1897 he introduced commutators and commutator groups independently of George Abram Miller. The notion of a lattice also goes back to Dedekind and Ernst Schröder at the end of the 19th century, but initially remained unnoticed.

After the death of Gauss, Peter Gustav Dirichlet succeeded him in 1855 and became friends with Dedekind. Dedekind became a full professor at the Polytechnikum in Zurich in 1858 and was professor of mathematics at the Technische Hochschule in Braunschweig from 1862 until his retirement in 1894. From 1872 to 1875 he was its director. Although he received several calls to prestigious universities, he preferred to remain in his hometown of Braunschweig. One of the main reasons was the close ties with his family (he had a brother and a sister, but was not married). Even after his retirement in 1894, he still lectured occasionally. In 1859 he visited Berlin with Riemann,[6] where he also met Leopold Kronecker, Ernst Eduard Kummer,[7] and Karl Weierstrass. In 1878 he visited Paris on the occasion of the World’s Fair.