You are here: Home › mathematics › August Leopold Crelle and his Journal 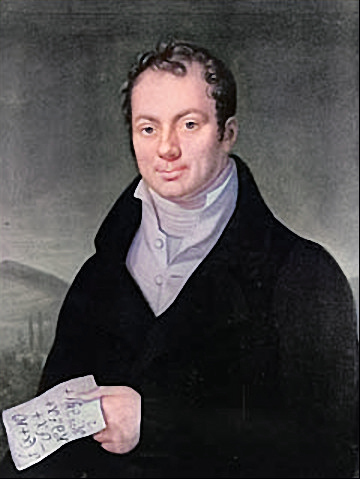 On March 11, 1780, German mathematician and civil engineer August Leopold Crelle was born. Crelle is best known for being the founder of Journal für die reine und angewandte Mathematik (also known as Crelle’s Journal). He also worked on the construction and planning of roads and the first railway in Germany, which was completed in 1838.

“The real purpose of mathematics is to be the means to illuminate reason and to exercise spiritual forces.”
– August Leopold Crelle

August Crelle was born in Eichwerder near Wriezen, Prussia, today on the eastern border of Germany to Poland. His father Christian Gottfried Crelle was an impoverished dike reeve and master builder, who had little in the way of income to be able to give his son a good education. Crelle was therefore largely self-taught, studying civil engineering. Had his family had the resources, then Crelle would have studied mathematics at university. He always had a love of mathematics but earning money was a necessity for him. He succeeded to secure a job as a civil engineer in the service of the Prussian Government and worked for the Prussian Ministry of the Interior on the construction and planning of roads and the one of the first railways in Germany (completed in 1838) between Berlin and Potsdam.[1] He finally obtained the rank of Geheimer Oberbaurat and was made a member of the Oberbaudirektion, under the Prussian Ministry of the Interior.[3]

He spent a great deal of time working on mathematics and achieved a remarkable level considering that he had never been formally taught, and when he was 36 years old he submitted a thesis De calculi variabilium in geometria et arte mechanica usu to the University of Heidelberg and was duly awarded a doctorate.[1] That same year in a little book Über einiger Eigenschaften des ebenen geradlinigen Dreiecks (On Some Properties of Plane Rectilinear Triangles), Crelle demonstrated how to determine a point in the interior of a triangle such that the lines joining this point to the vertices of the triangle and the sides of the triangle make equal angles.[4]

The Journal for Pure and Applied Mathematics

Crelle founded a journal devoted entirely to mathematics Journal für die reine und angewandte Mathematik (Journal for Pure and Applied Mathematics) in 1826, which is often referred to as Crelle’s Journal and which he edited until his death. Although not the first such journal, that honor goes to the Annales de Mathématiques Pures et Appliquées, founded by Joseph-Diaz Gergonne in 1810, which lasted until 1831. However, Crelle’s was the first periodical devoted exclusively to mathematical research.[4] It was organised quite differently from journals that existed at that time since these other journals were basically reporting meetings of Academies and Learned Societies where papers were read. Crelle was very much in control of the journal, and he acted as editor-in-chief for the first 52 volumes.[1] His journal introduced the work of many new young mathematicians and promoted mathematics instruction. Mathematicians such as Dirichlet, Eisenstein, Grassmann, Hesse, Jacobi, Kummer, Lobachevsky, Möbius, Plücker, von Staudt, Steiner, and Weierstrass all had their early works made famous by publication in Crelle’s journal.[4]

Crelle had the strong ability to spot exceptional talent in young mathematicians. He realised the importance of Norwegian mathematician Niels Henrik Abel‘s work and published several articles by him in this first volume, including his proof of the insolubility of the quintic equation by radicals.[5] Without Crelle, Abel would have remained unknown to the world due to his early death with only 26 years. But Abel was only one of many young mathematicians who benefited from acquaintance with the mathematical enthusiast of limited ability. Crelle also mentored the self-taught Swiss mathematical genius Jakob Steiner, often called “the greatest geometer since Apollonius.” [4]

In 1828 Crelle transferred from the Ministry of the Interior to the Ministry of Education, where he was employed as advisor on mathematics, particularly on the teaching of mathematics in high schools, technical high schools, and teachers colleges. During the summer of 1830, on an official tour to France, he studied the French methods of teaching mathematics. In his report to the ministry Crelle praised the organization of mathematical education in France but criticized the heavy emphasis on applied mathematics. In line with the neo-humanistic ideals then current in Germany, he maintained that the true purpose of mathematical teaching lies in the enlightenment of the human mind and the development of rational thinking.[3]

However, he became keen to bring the model of the École Polytechnique to Germany for this was the French route to train high quality teachers. One of the outcomes of his involvement with teaching of mathematics in schools was that he published a large number of textbooks and published multiplication tables that went through many editions. Crelle was elected to the Berlin Academy in 1827 with the strong support of Alexander von Humboldt.[9] Crelle wrote many mathematical and technical papers, textbooks, and mathematical tables and translated works by Lagrange and Legendre. Except for his Rechentafeln, these are now mostly forgotten. Also, for many years he published Journal für die Baukunst. Although beginning in the 1830’s his health declined until he was hardly able to walk, Crelle continued to further the course of mathematics, even at great personal sacrifice.[3]