You are here: Home › mathematics › God made the integers, all the rest is the work of man – Leopold Kronecker 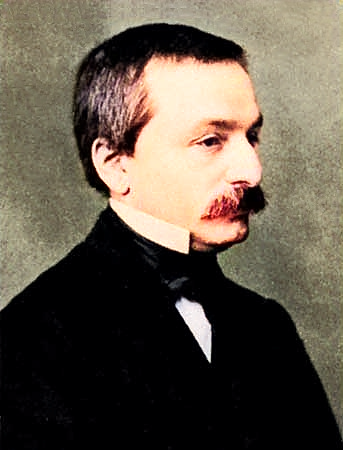 On December 7, 1823, German mathematician Leopold Kronecker was born, who worked on number theory and algebra. He criticized Cantor’s work on set theory, and his most cited quote says,

Leopold Kronecker was born in Liegnitz, Prussia (now Legnica, Poland) in a wealthy Jewish family to Isidor and Johanna Kronecker. After private tuition at home, Leopold Kronecker went to the Liegnitz Gymnasium where he was taught by mathematician Ernst Kummer, who noticed and encouraged the boy’s interest in mathematics. Kronecker became a student at Berlin University in 1841 and there he studied under Johann Peter Gustav Lejeune Dirichlet and Jakob Steiner.[7] He did not restrict himself to studying mathematics, however, for he studied other topics such as astronomy, meteorology and chemistry. He was especially interested in philosophy studying the philosophical works of Descartes, Leibniz, Kant, Spinoza and Hegel. After spending summer 1843 at University of Bonn, he went to Breslau to study under his old school teacher Ernst Kummer, who now had been appointed to a chair at Breslau in 1842.[1,6]

Mathematics as a Hobby

Back in Berlin, Kronecker defended his dissertation in algebraic number theory written under Dirichlet’s supervision in 1845. Kronecker did not follow his interest in research on an academic career path. Instead, he went back to his hometown to manage a large farming estate built up by his mother’s uncle, a former banker. For several years Kronecker focused on business, and although he continued to study mathematics as a hobby and corresponded with Kummer, he published no mathematical results. In 1853 he wrote a memoir on the algebraic solvability of equations extending the work of Évariste Galois on the theory of equations.[8]

The business secured Kronecker’s financial independence and he was able to return to Berlin in 1855 to pursue mathematics as a private scholar. There, he became a close friend of Karl Weierstrass,[9] who had recently joined the university, and his former teacher Kummer who had just taken over Dirichlet’s mathematics chair. Of course since Kronecker did not hold a university appointment, he did not lecture at this time but was remarkably active in research publishing a large number of works in quick succession. As a result of this published research, he was elected a member of the Berlin Academy in 1861. Now, as members of the Berlin Academy had a right to lecture at Berlin University, Kronecker started to lecture on number theory, the theory of equations, the theory of determinants, and the theory of integrals.

In 1866, when Bernhard Riemann died, Kronecker was offered the mathematics chair at the University of Göttingen, but he refused, preferring to keep his position at the Academy. Only in 1883, when Kummer retired from the University, was Kronecker invited to succeed him and became an ordinary professor. Interestingly, the topics Kronecker studied were restricted by the fact that he believed in the reduction of all mathematics to arguments involving only the integers and a finite number of steps. Kronecker believed that mathematics should deal only with finite numbers and with a finite number of operations. He was the first to doubt the significance of non-constructive existence proofs. It appears that, from the early 1870s, Kronecker was opposed to the use of irrational numbers, upper and lower limits, and the Bolzano-Weierstrass theorem, because of their non-constructive nature. Another consequence of his philosophy of mathematics was that to Kronecker transcendental numbers could not exist.[1]

Kronecker was easily offended and often broke contact with mathematicians who’s ideas he did not agree with. For example, he did not get along with Weierstrass, Richard Dedekind, and Georg Cantor. When he became math chair of the University of Berlin, Weierstrass planned to move to Switzerland but changed his mind when he decided that someone needed to oppose the views of Kronecker.[2] With the collaboration of Weierstraß, Helmholtz, Schroeter and Fuchs, he published the Journal für Mathematik, founded by Crelle. In 1884 he was elected a member of the Leopoldina. Leopold Kronecker died of bronchitis on 29 December 1891.

According to David Hilbert, Kronecker compared the number theorists with the lotophages, “who, once they have eaten something of this food, can never let it go again“.