You are here: Home › physics › Pascual Jordan and Quantum Mechanics 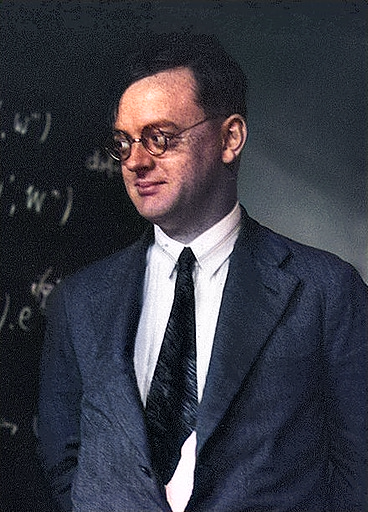 On October 18, 1902, theoretical and mathematical physicist Pascual Jordan was born. Jordan made significant contributions to quantum mechanics and quantum field theory. He contributed much to the mathematical form of matrix mechanics, and developed canonical anticommutation relations for fermions.

Pascual Jordan was born in Hanover, Kingdom of Prussia, German Empire, as son of Ernst Pasqual Jordan (1858-1924), a painter of landscapes and portraits, and Eva Fischer. One of his ancestors named Pascual Jorda was a Spanish nobleman and cavalry officer who served with the British during and after the Napoleonic Wars. Jorda eventually settled in Hanover, which in those days was a possession of the British royal family. A family tradition dictated that the first-born son in each generation be named Pascual. By the age of fourteen, Jordan was reading books such as August Pauly‘s 1905 work Darwinismus und Lamarckismus and began to think deeply about fundamental questions such as whether organic life was understandable from a purely mechanical and physical perspective.[3]

Jordan enrolled in the Hannover Technical University in 1921 where he studied zoology, mathematics, and physics. He switched to Göttingen University in 1923, which by then was at the very zenith of its prowess and fame in mathematics and the physical sciences. At Göttingen Jordan became an assistant first to mathematician Richard Courant and then to physicist Max Born.[5] Courant quickly realized that he had an exceptionally talented student and Jordan helped with the writing of Courant and Hilbert’s Methoden der mathematischen Physik. Jordan received his PhD from the University of Göttingen in 1924, working with Max Born and James Franck on the problems of quantum theory. In 1925 Jordan published two seminal papers, one in collaboration with Born and German physicist Werner Heisenberg [4] and one with just Born, that developed Heisenberg’s initial idea of noncommutative variables into a formulation of quantum theory in terms of matrix mechanics — the first working version of quantum mechanics.[1]

In the following years, in Göttingen and as a Rockefeller fellow in Copenhagen, Jordan helped propel the new theory toward completion, incorporating the wave mechanics approach of the German physicist Erwin Schrödinger [2] with the matrix formulation [2]. The comprehensive mathematical formalism of nonrelativistic quantum mechanics was achieved for the first time in the transformation theory published by Jordan and independently by the English physicist P.A.M. Dirac in 1927.[7] Jordan then put forward the general program of quantum field theory, proposing that relativistic quantum theory should describe all subatomic particles — matter and radiation alike — as quanta of wave fields. Working toward the implementation of this idea, he and the Hungarian-born American physicist Eugene P. Wigner [6] showed in 1928 how the second quantization is capable of describing fermions, in addition to bosons, by introducing the technical idea of an anticommutator (a special matrix operator).[2]

A New Type of Algebra

In 1929 Jordan was appointed as extraordinary professor of physics at the University of Rostock.[3] He went on to pioneer early quantum field theory before largely switching his focus to cosmology before World War II. In 1932, in an attempt to put quantum theory into a new algebraic setting, Jordan tried to establish the basic rules satisfied in the matrix interpretation of quantum theory. He published these ideas in Über die Multiplikation quantenmechanischer Gröβen in 1934. With this work Jordan devised a new type of non-associative algebras, now named Jordan algebras in his honor. Today, von Neumann algebras are also employed for this purpose. Jordan algebras have since been applied in projective geometry, number theory, complex analysis, optimization, and many other fields of pure and applied mathematics, and continue to be used in studying the mathematical and conceptual underpinnings of quantum theory.

In 1933, Jordan joined the Nazi party, and, moreover, an SA unit. But at the same time, he remained “a defender of Einstein” and other Jewish scientists.[3] Jordan enlisted in the Luftwaffe in 1939 and worked as a weather analyst at the Peenemünde rocket center, for a while. During the war he attempted to interest the Nazi party in various schemes for advanced weapons. His suggestions were ignored because he was considered “politically unreliable”. In 1944, before the war ended, Jordan was appointed as an ordinary professor of theoretical physics at the University of Berlin.

Wolfgang Pauli [8] declared Jordan “rehabilitated” to the authorities some time after the war, allowing him to regain academic employment after a two-year period and then recover his full status as a tenured professor in 1953. Jordan went against Pauli’s advice, and reentered politics after the period of denazification came to an end under the pressures of the Cold War. He secured election to the Bundestag standing with the conservative Christian Democratic Union. In 1957 Jordan supported the arming of the Bundeswehr with tactical nuclear weapons by the Adenauer government, while the Göttinger 18 (which included Born and Heisenberg) issued the Göttinger Manifest in protest. This and other issues were to further strain his relationships with his former friends and colleagues.

Pauli worked on an idea of Paul Dirac about a time-varying gravitational constant in the framework of a scalar-tensor theory, which he developed already in the 1940s and which he presented in his book Gravity and Space in 1952. A similar theory (Brans-Dicke theory) was formulated later by Carl H. Brans and Robert Dicke, whereby the emphasis of their consideration lay in an implementation of Mach’s principle. Thus he explained the continental drift as consequence of an expanding globe (expansion theory). This explanation is considered as refuted today. From 1963 to 1967 he was president of the Academy of Sciences and Literature in Mainz.