You are here: Home › physics › Erwin Schrödinger and his Famous Thought Experiment

On August 12, 1887, Austrian physicist and Nobel Laureate Erwin Schrödinger was born. Schrödinger developed a number of fundamental results in the field of quantum theory, which formed the basis of wave mechanics: he formulated the wave equation and revealed the identity of his development of the formalism and matrix mechanics. Schrödinger proposed an original interpretation of the physical meaning of the wave function. Although many of you are not physicists, you probably have heard of Schrödinger‘s famous cat thought experiment, which has already become something linke an internet meme. But, before we come to the experiment, let’s have a look on this extraordinary scientist.

“The task is, not so much to see what no one has yet seen; but to think what nobody has yet thought, about that which everybody sees.” Erwin Schrödinger, as quoted in Problems of Life (1952), by Ludwig von Bertalanffy

Schrödinger was born in Erdberg, Vienna, Austria, as an only child to Rudolf Schrödinger, who ran a small linoleum factory which he had inherited from his own father, and Georgine Emilia Brenda Schrödinger, who was of English-Austrian descent. At early age, he received lessons at home from a private tutor up to the age of ten, when he entered the Akademisches Gymnasium in 1898 until he graduated in 1906.[1] From 1906 to 1910 Schrödinger studied theoretical physics in Vienna under Franz S. Exner (1849–1926) and Friedrich Hasenöhrl (1874–1915), who was Boltzmann’s successor. He also conducted experimental work with Karl Wilhelm Friedrich “Fritz” Kohlrausch. It was in these years that Schrödinger acquired a mastery of eigenvalue problems in the physics of continuous media, thus laying the foundation for his future great work.[2] In 1910, Schrödinger was awarded his doctorate for the dissertation On the conduction of electricity on the surface of insulators in moist air.

In 1911, Schrödinger became an assistant to Exner, not in theoretical physics but in experimental physics. In 1914 he achieved Habilitation (venia legendi), but with the outbreak of World War I Schrödinger received orders to work as a commissioned officer in the Austrian fortress artillery. In the spring of 1917 Schrödinger was sent back to Vienna and assigned to teach a course in meteorology. He was able to continue research and it was at this time that he published his first results on quantum theory. In 1920 he became the assistant to Max Wien, in Jena, and in September 1920 he attained the position of ao. Prof. (ausserordentlicher Professor), roughly equivalent to associate professor in Stuttgart. In 1921, he became o. Prof. (ordentlicher Professor, i.e. full professor), in Breslau (now Wrocław, Poland). Soon however he was to move yet again, accepting the chair of theoretical physics in Zürich in late 1921, where his closest colleague in the first years was Hermann Weyl,[4] who was to provide the deep mathematical knowledge which would prove so helpful to Schrödinger in his work. His papers at that time dealt with specific heats of solids, with problems of thermodynamics (he was greatly interested in Boltzmann’s probability theory) and of atomic spectra.[2]

The Study of Quantium Statistics

In 1924 he began to study quantum statistics. When he read de Broglie’s thesis [5] (Researches on the quantum theory) in which he put forward his theory of electron waves, based on the work of Einstein and Planck, this should a turning point in the direction of Schrödinger’s research. Upon the suggestion of a student Schrödinger began his work on his wave equation, which is known as Schrödinger equation. Schrödinger published his revolutionary work relating to wave mechanics and the general theory of relativity in a series of six papers in 1926. Wave mechanics, as proposed by Schrödinger in these papers, was the second formulation of quantum theory, the first being matrix mechanics due to Heisenberg.[6] In those papers he described his partial differential equation that is the basic equation of quantum mechanics and bears the same relation to the mechanics of the atom as Newton’s equations of motion bear to planetary astronomy. The solutions to Schrödinger’s equation, unlike the solutions to Newton’s equations, are wave functions that can only be related to the probable occurrence of physical events. The definite and readily visualized sequence of events of the planetary orbits of Newton is, in quantum mechanics, replaced by the more abstract notion of probability.[3]

In 1927, he succeeded Max Planck at the Friedrich Wilhelm University in Berlin. In 1934, however, Schrödinger decided to leave Germany; he disliked the Nazis’ anti-semitism and became a Fellow of Magdalen College at the University of Oxford. Soon after he arrived, he received the Nobel Prize together with Paul Dirac.[7] In 1934, Schrödinger lectured at Princeton University; he was offered a permanent position there, but did not accept it. In the end he took up a position at the University of Graz in Austria in 1936. He had also accepted the offer of chair position at Department of Physics, Allahabad University in India. However the advancing Nazi threat caught up with Schrödinger again in Austria.

In the midst of these tenure issues in 1935, after extensive correspondence with Albert Einstein, he proposed what is now called the Schrödinger’s cat thought experiment. A cat is locked in a steel box with a small amount of a radioactive substance such that after one hour there is an equal probability of one atom either decaying or not decaying. If the atom decays, a device smashes a vial of poisonous gas, killing the cat. However, until the box is opened and the atom’s wave function collapses, the atom’s wave function is in a superposition of two states: decay and non-decay. Thus, the cat is in a superposition of two states: alive and dead. Schrödinger thought this outcome “quite ridiculous,” and when and how the fate of the cat is determined has been a subject of much debate among physicists.[3] 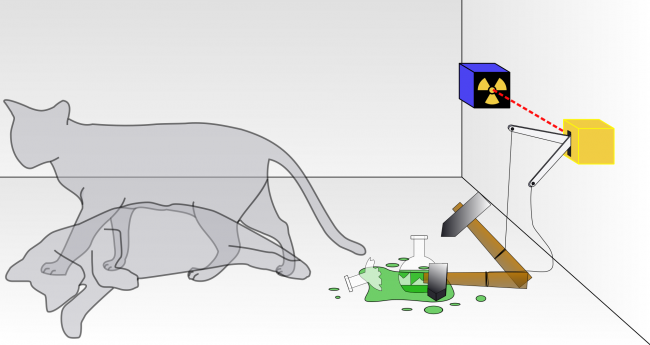 Schrödinger’s cat: a cat, a flask of poison, and a radioactive source are placed in a sealed box.

In 1938 he was dismissed from his university post in Graz for ‘political unreliability’. He suffered harassment and received instructions not to leave the country, but he and his wife fled to Italy. From there, he went to visiting positions in Oxford and Ghent University. In the same year he received a personal invitation from Ireland’s Taoiseach, Éamon de Valera, to reside in Ireland and agree to help establish an Institute for Advanced Studies in Dublin. He moved to Clontarf, Dublin, became the Director of the School for Theoretical Physics in 1940 and remained there for 17 years.

In 1944, he wrote What Is Life?, which contains a discussion of negentropy and the concept of a complex molecule with the genetic code for living organisms. According to James D. Watson‘s memoir, DNA, the Secret of Life, Schrödinger’s book gave Watson the inspiration to research the gene, which led to the discovery of the DNA double helix structure in 1953. Schrödinger had a lifelong interest in the Vedanta philosophy of Hinduism, which influenced his speculations at the close of What Is Life? about the possibility that individual consciousness is only a manifestation of a unitary consciousness pervading the universe. In 1956, he returned to Vienna as professor emeritus at the university. At an important lecture during the World Energy Conference he refused to speak on nuclear energy because of his skepticism about it and gave a philosophical lecture instead. During this period Schrödinger turned from mainstream quantum mechanics’ definition of wave–particle duality and promoted the wave idea alone, causing much controversy with other leading physicists.

During his last few years Schrödinger remained interested in mathematical physics and continued to work on general relativity, unified field theory and meson physics.[1] On 4 January 1961, Schrödinger died of tuberculosis, aged 73, in Vienna. Because of his exceptional gifts, Schrödinger was able in the course of his life to make significant contributions to nearly all branches of science and philosophy, an almost unique accomplishment at a time when the trend was toward increasing technical specialization in these disciplines.[3]