You are here: Home › physics › Werner Heisenberg and the Uncertainty Principle 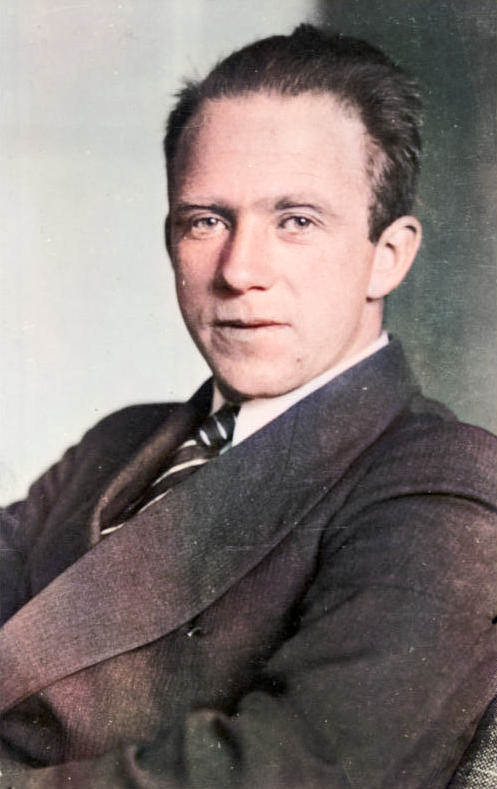 On December 5, 1901, German theoretical physicist and Nobel Prize laureate Werner Heisenberg was born, who along with Max Born and Pascual Jordan laid the foundations of quantum mechanics. He is probably best known for his Uncertainty Principle, asserting a fundamental limit to the precision with which certain physical properties can be known.

Actually, I had a major in physics back in highschool and thus, for many years I have been fascinated with Heisenberg’s Principle of Uncertainty. Just visualizing that this essential principle challenges our idea that we are able to accurately study any phenomenon absolutely and that in many instances we can only approximate what is “real”. The challenging question becomes, “what is real?” and “what can we know?” Besides, this is also the central question in Immanuel Kant‘s Epistemology. [2] Today, if people hear the name “Heisenberg”, they probably in the first place think of the popular tv series Breaking Bad…

Werner Heisenberg was born in Würzburg, Germany to Kaspar Earnesta August Heisenberg, a secondary school teacher of classical languages who became Germany’s only ordentlicher Professor (ordinarius professor) of medieval and modern Greek studies in the university system, and his wife Annie Wecklein. He attended the Maximiliansgymnasium in Munich, which was run by his grandfather until 1913. Heisenberg studied physics and mathematics from 1920 to 1923 in Munich under Arnold Sommerfeld [3] and obtained his PhD in 1923 with a thesis on Stabilität und Turbulenz von Flüssigkeitsströmen (Stability and turbulences in Liquid Flows). He continued his research in Göttingen, the most famous physics faculty in the world by that time, under Max Born. Actually, Göttingen has bred 45 Nobel Laureates, who in the first half of the 20th century have studied, taught or made contributions there. In 1924 already Heisenberg completed his habilitation on the anomalous Zeeman effect at Göttingen.

Subsequently, under an International Education Board Rockefeller Foundation fellowship, Heisenberg went to do research with Niels Bohr in Copenhagen. Heisenberg later wrote:

“I learned optimism from Sommerfeld, mathematics at Göttingen, and physics from Bohr.”

The Matrix Formulation of Quantum Mechanics

He returned to Göttingen and with Max Born and Pascual Jordan, over a period of about six months, developed the matrix mechanics formulation of quantum mechanics. Heisenberg’s breakthrough came during a holiday stay on the island of Helgoland in June 1925, where he wanted to cure his hay fever. Instead of the unobservable Bohr atomic orbits, he used only the observable frequencies and transition probabilities, which he arranged in a scheme that Max Born later identified as a matrix. The quantum-theoretical reinterpretation of kinematic and mechanical relations is the birth of quantum mechanics with the subsequent works by and with Max Born and Pascual Jordan.

Back in Copenhagen, Heisenberg worked as assistant to Bohr in 1927 he developed his famous uncertainty principle, while working on the mathematical foundations of quantum mechanics. This principle states that the velocity and position of an electron can never both be exactly determined, since the act of measurement necessarily disturbs the conditions. Basically, it states there’s an intrinsic limit on the accuracy of simultaneous measurements of certain pairs of variables. The more precisely the position of some particle is determined, the less precisely its momentum can be known, and vice versa.

“It can be expressed in its simplest form as follows: One can never know with perfect accuracy both of those two important factors which determine the movement of one of the smallest particles—its position and its velocity. It is impossible to determine accurately both the position and the direction and speed of a particle at the same instant.”
— Werner Heisenberg, [6]

In 1927, at the age of 25, Heisenberg was appointed professor at the University of Leipzig, where he and Friedrich Hund made it a centre for theoretical physics, especially nuclear physics. Heisenberg was awarded the Nobel Prize in Physics in 1932 for “The creation of quantum mechanics, the application of which has led, among other things, to the discovery of the allotropic forms of hydrogen“. Also in 1932 Heisenberg wrote a three part paper which described the modern picture of the nucleus of an atom. He treated the structure of the various nuclear components discussing their binding energies and their stability. These papers opened the way for others to apply quantum theory to the atomic nucleus.

When Sommerfeld in 1935 indicated that he wanted Heisenberg to succeed him at the University of Munich, the Nazis wanted “German mathematics” to replace “Jewish mathematics” and “German physics” to replace “Jewish physics”. Relativity and quantum theory were classified as “Jewish” and as a consequence Heisenberg’s appointment to Munich was blocked. Although he was in no way Jewish, Heisenberg was subjected to frequent attacks in the press describing him to be of “Jewish style”. During the Second World War Heisenberg headed the unsuccessful German nuclear weapons project “Uranverein“. He worked together with Otto Hahn, one of the discoverers of nuclear fission, on the development of a nuclear reactor but failed to develop an effective program for nuclear weapons. Whether this was because of lack of resources or a lack of a desire to put nuclear weapons in the hands of the regime, it is unclear.

After the war in 1946 he returned from English captivity to Germany and was appointed director of the Max Planck Institute for Physics and Astrophysics and held this post until he resigned in 1970. In 1957, Heisenberg was a signatory of the Declaration of the German Nuclear Physicists of the Göttinger Achtzehn (Göttingen Eighteen), among them the Nobel laureates Otto Hahn, Max Born, and Max von Laue, who stood against arming the West German army with tactical nuclear weapons in the 1950s, the early part of the Cold War. From 1957, Heisenberg was interested in plasma physics and the process of nuclear fusion.On February 1, 1976 Heisenberg, who was characterized as an admirer of classical music while also being a distinguished pianist, died of cancer of the kidneys and gall bladder.