You are here: Home › art › Lucas Cranach the Elder – the “fastest Painter”

On October 16, 1553, German Renaissance painter and printmaker in woodcut and engraving Lucas Cranach the Elder passed away. Cranach is known for his portraits, both of German princes and those of the leaders of the Protestant Reformation, whose cause he embraced with enthusiasm, becoming a close friend of Martin Luther. Lucas Cranach the Elder has been considered the most successful German artist of his time.

Lucas Cranach was born at Kronach in upper Franconia, probably in 1472. He learned the art of drawing most probably from his father Hans Maler. Actually, there is no documentary evidence of Cranach’s origin or date of birth. Based on court records from 1495, which deal with the bad behaviour of Maler’s children, the year of birth 1472 is doubted by more recent research and is only vaguely dated to “around 1475”. Later, the name of Cranach’s birthplace was used for his surname, a custom of the times. How Cranach was trained is not known, but it was probably with local south German masters, as with his contemporary Matthias Grünewald, who worked at Bamberg and Aschaffenburg.

Cranach’s work drew the attention of Duke Friedrich III, Elector of Saxony, known as Frederick the Wise, who attached Cranach to his court in 1504. Cranach was to remain in the service of the Elector and his successors for the rest of his life, although he was able to undertake other work. Early in his career Cranach was active in several branches of his profession: sometimes a decorative painter, more frequently producing portraits and altarpieces, woodcuts, engravings, and designing the coins for the electorate.

In the Service of the Elector

Early in the days of his official employment he startled his master’s courtiers by the realism with which he painted still life. Before 1508 he had painted several altarpieces for the Castle Church at Wittenberg in competition with Albrecht Dürer,[6] Hans Burgkmair and others. In 1508, Cranach was awarded an emblem (with a winged snake with a ruby ring in its mouth) as a family coat of arms by his employer. In the same year he was sent by the Elector to the Netherlands (to Mechelen) on a diplomatic mission, where he made portraits of Emperor Maximilian I and later Emperor Charles V, among other members of the family. 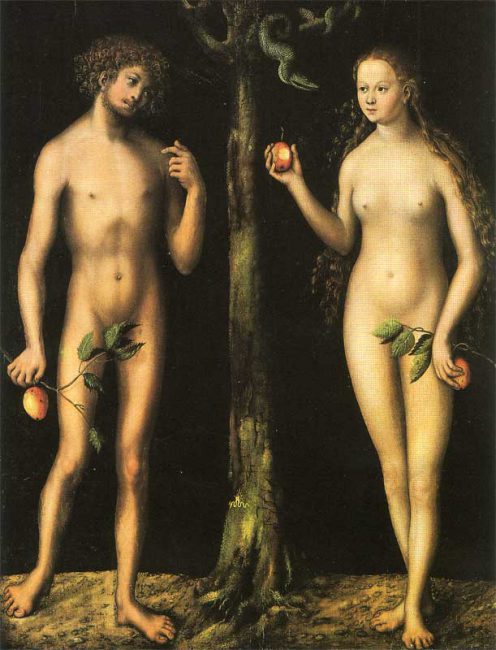 In 1520 he was able to buy a pharmacy in Wittenberg, a few years later he is also proven as a bookseller, paper merchant and publisher. In Wittenberg he also became friends with Philipp Melanchthon and Martin Luther.

Martin Luther and the Reformation

Cranach’s patrons were powerful supporters of Martin Luther,[5] and Cranach used his art as a symbol of the new faith. He made numerous portraits of Luther, and provided woodcut illustrations for Luther’s German translation of the Bible. Cranach, like his patron, was friendly with the Protestant Reformers at a very early stage. The oldest reference to Cranach in Luther’s correspondence dates from 1520, when Cranach first made an engraving of Luther as an Augustinian friar. Five years later, Luther renounced his religious vows, and Cranach was present as a witness at the betrothal festival of Luther and Katharina von Bora.

The death in 1525 of the Elector Frederick the Wise and Elector John’s in 1532 brought no change in Cranach’s position, He remained a favourite with John Frederick I, under whom he twice filled the office of burgomaster of Wittenberg.

In 1547, John Frederick was taken prisoner at the Battle of Mühlberg, and Wittenberg was besieged. During the siege Charles V, the Holy Roman Emperor, remembered Cranach from his childhood and summoned him to his camp at Pistritz. Cranach came, and begged on his knees for kind treatment for Elector John Frederick. At John Frederick‘s request Cranach followed him three years later into captivity in Augsburg, then to Innsbruck. There he also worked for the duke and his visitors – in the meantime he had handed over his Wittenberg workshop to his son Lucas.

Sybille of Cleves wife of John Frederick I, Lucas Cranach the Elder, 1526

Following the huge international success of Dürer’s prints, other German artists, much more than Italian ones, devoted their talents to woodcuts and engravings. This accounts for the comparative unproductiveness as painters of Albrecht Dürer and Hans Holbein the Younger, and also may explain why Cranach was not especially skilled at handling color, light, and shade. Constant attention to contour and to black and white, as an engraver, seems to have affected his sight; and he often outlined shapes in black rather than employing modelling and chiaroscuro. The largest proportion of Cranach’s output is of portraits, and it is chiefly thanks to him that we know what the German Reformers and their princely adherents looked like. He painted not only Martin Luther himself but also Luther’s wife, mother and father.

Cranach’s religious subjects reflect the development of the Protestant Reformation, and its attitudes to religious images. In his early career, he painted several Madonnas; his first woodcut (1505) represents the Virgin and three saints in prayer before a crucifix. Later on he painted the marriage of St. Catherine, a series of martyrdoms, and scenes from the Passion. Towards the end of his life, after Luther’s initial hostility to large public religious images had softened, Cranach painted a number of “Lutheran altarpieces” of the Last Supper and other subjects, in which Christ was shown in a traditional manner, including a halo, but the apostles, without halos, were portraits of leading reformers.

Cranach was equally successful in somewhat naive mythological scenes which nearly always feature at least one slim female figure, naked but for a transparent drape or a large hat. Humour and pathos are combined at times in pictures such as Jealousy (Augsburg, 1527; Vienna, 1530), where women and children are huddled into groups as they watch the strife of men wildly fighting around them. These are mostly in narrow upright formats; examples are several of Venus, alone or with Cupid, who has sometimes stolen a honeycomb, and complains to Venus that he has been stung by a bee (Weimar, 1530; Berlin, 1534).