You are here: Home › physics › Eugene Wigner and the Structure of the Atomic Nucleus 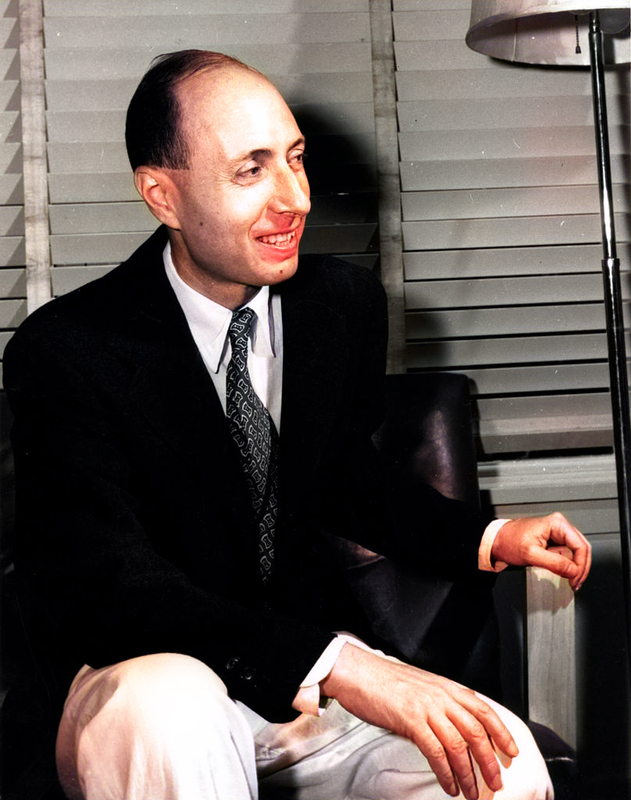 On November 17, 1902, Hungarian American theoretical physicist and mathematician Eugene Paul Wigner was born. He is best known for for his contributions to the theory of the atomic nucleus and the elementary particles, particularly through the discovery and application of fundamental symmetry principles for which he shared the 1963 Nobel Prize in Physics with Maria Goeppert. [4]

“A possible explanation of the physicist’s use of mathematics to formulate his laws of nature is that he is a somewhat irresponsible person. As a result, when he finds a connection between two quantities which resembles a connection well-known from mathematics, he will jump at the conclusion that the connection is that discussed in mathematics simply because he does not know of any other similar connection.”
– Eugene Wigner (1960)[13]

Wigner was born into a middle-class Jewish family and between 1915 and 1919, together with John von Neumann,[5] attended the humanist Lutheran Gymnasium in Budapest. He then studied chemical engineering at the Technical University of Berlin.Wigner’s thesis Bildung und Zerfall von Molekülen (“Formation and Decay of Molecules“) was supervised by Michael Polanyi and contains the first theory of the rates of association and dissociation of molecules. Here he got to know Albert Einstein and Leó Szilárd among others.[6] In his free time he was intensively occupied with physics. As a visitor to the colloquia of the German Physical Society, he soon became familiar with current research questions and developed a preference for theoretical physics.

From Berlin to Göttingen

Having completed his doctorate, Wigner returned to Budapest to join his father’s tannery firm as planned. However, things did not go too well. Wigner’s father supported him taking the post in Berlin, where he accepted an offer from Karl Weissenberg at the Kaiser Wilhelm Institute in Berlin. Weissenberg wanted someone to assist him with his work on x-ray crystallography, and Polanyi had recommended Wigner. [2] Wigner received a request from Arnold Sommerfeld to work in Göttingen as an assistant to the great mathematician David Hilbert.[7] This proved a disappointment, as Hilbert’s interests had shifted to logic. Wigner nonetheless studied independently. He laid the foundation for the theory of symmetries in quantum mechanics and in 1927 introduced what is now known as the Wigner D-matrix. Wigner and Hermann Weyl were responsible for introducing group theory as a mathematical method in quantum mechanics.[9] This later (1928) got a general formulation in the publication Gruppentheorie und Quantenmechanik, but was not easy to understand, especially among younger physicists. Wigner’s later publication of 1931, Group Theory and its Application to Quantum Mechanics of Atomic Spectra, made group theory more accessible to a wider readership.

In 1928 Wigner returned to Berlin to habilitate at the Technische Hochschule and in 1930 was appointed associate professor of theoretical physics. An offer to spend a term in Princeton saw him travel to the United States at the end of 1930. From 1930 to 1933 Wigner spent part of the year at Princeton, part at Berlin. Because of his Jewish origin he lost his position at the TH Berlin after the National Socialist seizure of power and finally moved to the USA. Except for the years 1936 – 1938 in Wisconsin, Wigner spent the rest of his career at Princeton.[2] In 1937, Wigner became a naturalized citizen of the United States. In 1939, it was Wigner, who introduced Leó Szilárd to Albert Einstein for a meeting that resulted in the Einstein-Szilárd letter which urged President Franklin D. Roosevelt to initiate the Manhattan Project to develop atomic bombs.

The Manhattan Project and the World’s First Atomic Reactor

During the Manhattan Project, Wigner led a team that was to design the production nuclear reactors that would convert uranium into weapons gradeplutonium. Edward Teller, John von Neumann and Leó Szilárd also worked together with him. All four scientists were of Hungarian descent and were called “Martians” by their American colleagues because of their “supernatural” intellectual abilities. At the time, reactors existed only on paper, and no reactor had yet gone critical. In July1942, Wigner chose a conservative 100 MW design, with a graphite neutron moderator and water cooling, which led to the successful development of the world’s first atomic reactor, Chicago Pile One (CP-1) that achieved a nuclear chain reaction in 1942.[8] In addition to numerous terms that explicitly bear his name, see below, he implicitly “generated” numerous fundamental techniques in the entire field of theoretical physics: Among other things, the frequently used theory of random matrices goes back to him, since he described the spectra of highly excited atomic nuclei in this way and divided them into symplectic or unitary or orthogonal symmetry classes according to their symmetry properties. The theory later experienced a renaissance within the framework of the theory of quantum chaos.

In 1946, Wigner accepted a position as director of research and development at Clinton Laboratory (now Oak Ridge National Laboratory) in Oak Ridgen Tenn.. Not an administrator by background or temperament, Wigner left after a year and returned to teaching and research at Princeton University.[3] In 1963, Wigner was awarded the Nobel Prize in Physics, along with American physicist Maria Goeppert-Mayer and German physicist J. Hans D. Jensen, for work on the structure of the atomic nucleus. He professed to never have considered the possibility that this might occur, and he added: “I never expected to get my name in the newspapers without doing something wicked.” Wigner also won the Enrico Fermi award in 1958, and the National Medal of Science in 1969.

Wigner also thought philosophically about physics and its relationship to mathematics. His essay The unreasonable effectiveness of mathematics in the natural sciences has become proverbial. His thought experiment Wigner’s friend represents a subjectivist interpretation of quantum mechanics. Near the end of his life, Wigner’s thoughts turned more philosophical. He became interested in the Vedanta philosophy of Hinduism, particularly its ideas of the universe as an all pervading consciousness. Eugene Wigner died in Princeton on January 1, 1995.

Tyler DeWitt on the ‘Atomic Structure: Discovery of the Neutron‘ [15]