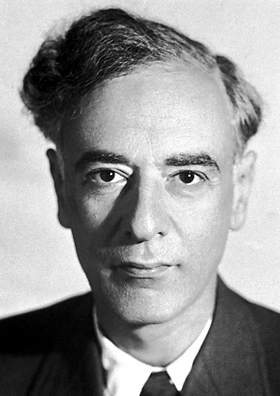 On January 22, 1908, Soviet physicist and Nobel Laureate Lev Landau was born. Landau made fundamental contributions to many areas of theoretical physics. He received the 1962 Nobel Prize in Physics for his development of a mathematical theory of superfluidity that accounts for the properties of liquid helium II  at a temperature below 2.17 K (−270.98 °C).

Lev Landau was the son of the Caspian-Black Sea Joint-Stock Company engineer David Lvovich Landau (1866-1943), who worked in the oil fields near Baku. His mother was the pharmacologist Lyubov Harkavy-Landau. He came from the Jewish-Asian Landau family, from which many renowned rabbis and scholars have emerged. Landau finished school as early as 1921 and studied at the Faculty of Physics, Mathematics and Chemistry at the University of Baku from 1922. In 1924 he moved to the physics department of the University of Leningrad where he became assistant to Abram Ioffe. Close study friends were George Gamov and Dmitri Ivanenko. His first publication appeared in 1926 and he graduated from the Physical Department at the age of 19. In 1929 Landau received a research grant which led him to Max Born (Göttingen),[6] Paul Ehrenfest (Leiden),[7] Werner Heisenberg (Leipzig) [8] and Wolfgang Pauli (Zurich).[9] He also visited Niels Bohr (in Copenhagen),[5] where he was after 1929 also in 1933 and 1934) and Ernest Rutherford (Cambridge). During this time he also developed his collaboration with Rudolf Ernst Peierls.[10]

On his return to Leningrad in 1931, Landau became head of the Department of Theoretical Physics at the Institute of Physics and Technology at Kharkov University in 1932 and in 1933 he was appointed professor of theoretical physics at the Institute of Mechanics and Mechanical Engineering. On the basis of his merits, he was awarded a doctorate in 1934, without submitting a dissertation. In 1935 he was appointed professor of general physics at Kharkov University. Landau lived with Konkordiya (Kora) Drobantseva, a chemistry graduate and engineer in a confectionery factory, whom he met in Kharkov in the mid-1930s. In 1946 their son Igor was born, and the couple officially married.

In 1937 he accepted a call from Pyotr Kapiza to the Institute of Physics in Moscow where he became head of the department of theoretical physics. In April 1938 Landau was arrested by the secret service together with his friends Moisei Korez and Yuri Rumer. According to Gennady Gorelik, the reason was an anti-Stalinist (but carried by socialist pathos) leaflet that he and his friends wanted to distribute on May 1. After his release, which came about after a courageous interference by Kapiza in 1939 with the head of the secret service, Lawrenti Beria, he returned to the Moscow Institute, where he founded a scientific school from which some internationally renowned physicists emerged.

In the late 1940s and early 1950s he worked on the Soviet hydrogen bomb project. He organized the numerical calculations that enabled them to successfully predict the energy release of the first Soviet hydrogen bomb. Landau was awarded two Stalin prizes for this (1949, 1953) and as a hero of socialist work (1954). In the 1950s he was at the Institute of Physical Problems of the Soviet Academy of Sciences (later Kapiza Institute). He continued to be mistrusted by officials; for example, despite his high reputation, he was not allowed to travel abroad to the West, and the director of the institute also remained with Kapiza. One reason for this was that he did not mince his words and often made sarcastic remarks.

Already in 1946, Landau was elected to the membership of the Academy of Sciences of the U.S.S.R. and he received the U.S.S.R. State Prize several times. In 1962, Landau reiceived the Lenin Science Prize amongst E.M. Lifshitz for their Course of Theoretical Physics. On 7 January 1962 a tragic accident occurred: on the way from Moscow to Dubna, Landau’s car collided with an oncoming truck on an icy road. Eleven bones and the skull were broken. He struggled with death in the weeks that followed and had to be resuscitated at least four or six times. After three months Landau awoke from the coma. However, he never fully recovered from the consequences of the accident, and he never nearly regained his great creativity, despite the support of his many students and the Soviet physics community in his recovery. When he was awarded the Nobel Prize in Physics in the same year, he could not accept it in person, Lew Landau finally died as a result of the car accident six years later on 1 April 1968.