You are here: Home › mathematics › Lejeune Dirichlet and the Mathematical Function 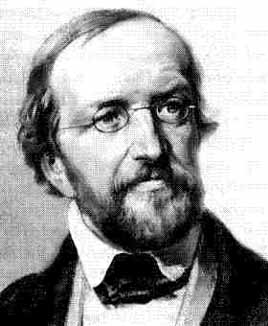 On February 13, 1805, German mathematician Johann Peter Gustav Lejeune Dirichlet was born. Dirichlet is best known for his papers on conditions for the convergence of trigonometric series and the use of the series to represent arbitrary functions. He also proposed in 1837 the modern definition of a mathematical function.

“In mathematics as in other fields, to find one self lost in wonder at some manifestation is frequently the half of a new discovery.”
– Gustav Lejeune Dirichlet, [13]

Gustav Lejeune Dirichlet was born in Düren, halfway between Aachen and Cologne in Germany, a town on the left bank of the Rhine which at the time was part of Napoleon Bonaparte’s French Empire. His father Johann Arnold Lejeune Dirichlet was the postmaster, merchant, and city councilor, whose family came from Richelet, a small town in Belgium. This explains the origin of his name which comes from “Le jeune de Richelet” meaning “Young from Richelet“. The youngest of seven children, his parents enrolled him in an elementary school and then private school to become a merchant. But, young Dirichlet showed a strong interest in mathematics and convinced his parents to allow him to continue his studies. In 1817 he was sent to the Gymnasium in Bonn and in 1820, Dirichlet moved to the Jesuit Gymnasium in Cologne, where his lessons with Georg Simon Ohm widened his knowledge in mathematics.[5]

By the age of 16 Dirichlet had completed his school qualifications and was ready to enter university. However, the standards in German universities were not high at this time so Dirichlet decided to study in Paris.[1] In 1822, Dirichlet contracted smallpox, but it did not keep him away from his lectures in the Collège de France for long. In 1823 he was recommended to General Foy, who hired him as a private tutor to teach his children German, the wage finally allowing Dirichlet to become independent from his parents’ financial support. Dirichlet’s first original research brought him immediate fame, since it was on Fermat’s Last Theorem.[6] The theorem claimed that for n > 2 there are no non-zero integers x, y, z such that xn + yn = zn. The cases n = 3 and n = 4 had been proven by Leonard Euler and Fermat, and Dirichlet attacked the theorem for n = 5.[7] Adrien-Marie Legendre, one of the referees, soon completed the proof for this case, while Dirichlet completed his own proof a short time after Legendre, and a few years later produced a full proof for the case n=14.[8]

The Modern Concept of a Function

With Alexander von Humboldt’s help Dirichlet then moved to Berlin in 1828, where he was appointed at the Military College and would be able to teach at the University of Berlin. Soon after this he was appointed a professor at the University of Berlin where he remained from 1828 to 1855. In 1829, during a trip, he met Carl Gustav Jacob Jacobi, at the time professor of mathematics at Königsberg University.[9] Over the years they kept meeting and corresponding on research matters, in time becoming close friends. Dirichlet was appointed to the Berlin Academy in 1831 and an improving salary from the university put him in a position to marry, and he married Rebecca Mendelssohn, one of the composer Felix Mendelssohn’s two sisters. In 1837 Dirichlet proposed the modern concept of a function y = f (x) in which for every x, there is associated with it a unique y. This work was inspired by significant contributions he had made to the understanding on Fourier Series, particularly with respect to conditions of convergence.[4] In mechanics he investigated the equilibrium of systems and potential theory, which led him to the Dirichlet problem concerning harmonic functions with prescribed boundary values.[3]

Dirichlet had a high teaching load at the University of Berlin, being also required to teach in the Military College and in 1853 he complained in a letter to his pupil Leopold Kronecker that he had thirteen lectures a week to give in addition to many other duties.[10] It was therefore something of a relief when, on Carl Friedrich Gauss’s death in 1855, he was offered his chair at Göttingen.[1] Ernst Eduard Kummer was called to assume his position as a professor of mathematics in Berlin. The quieter life in Göttingen seemed to suit Dirichlet. He had more time for research and some outstanding research students. However, sadly he was not to enjoy the new life for long. Dirichlet died on 5 May 1859, in Göttingen. His lectures on number theory were edited by Richard Dedekind after his death and were given a famous appendix of their own. Dirichlet was known in his day for the (by the standards of the time) rigour of his proofs. Carl Gustav Jacobi wrote in a letter to Alexander von Humboldt on 21 December 1846:

“If Gauss says he has proved something, it is very probable to me that if Cauchy says it, it is just as much pro as contra to bet; if Dirichlet says it, it is certain.”