You are here: Home › engineering › The Clifton Suspension Bridge – Iconic Landmark of the Industrial Age 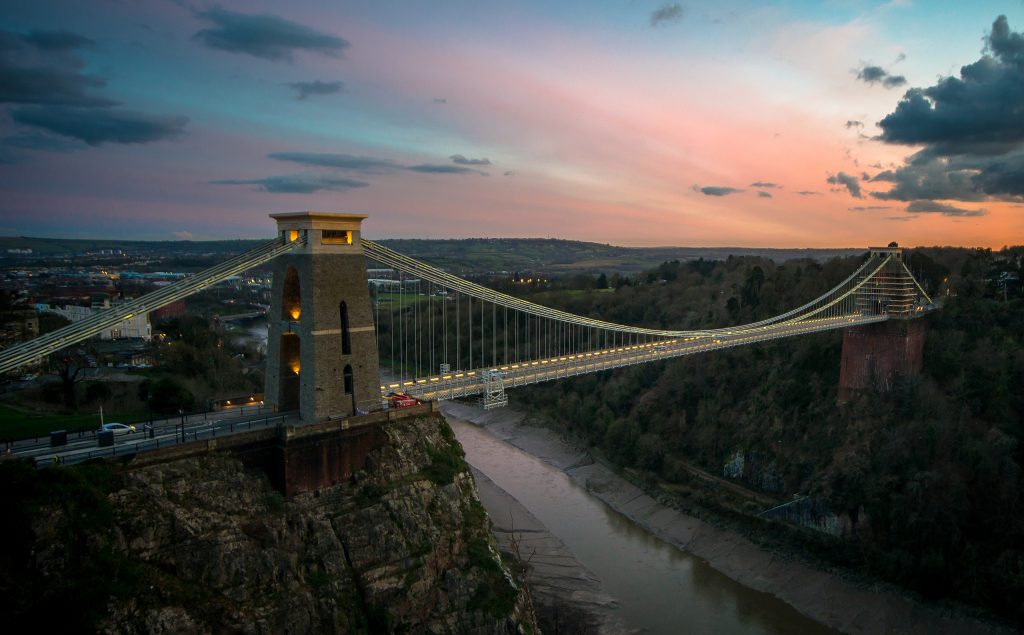 On December 8, 1864, the Clifton Suspension Bridge spanning the Avon Gorge and the River Avon, designed by Isambard Kingdom Brunel,[3] was opened for the public. Although Brunel was not able to see the bridge in operation anymore during his lifetime, the Clifton Suspension bridge was the first major commision of the famous engineer of the Great Western Railroad and the then largest steamships in the world.

Bridges Across the Avon

In the 13th century, the very first stone bridge was built across the Avon, and construction on the river back then was hard to due to high tidal range. On the ‘Bristol Bridge’, the first bridge, several houses were built with up to five stories. But even though the bridge enjoyed high traffic at all times, a law way passed in the late 18th century that all bridges had to be at least 30 m above sea level to guarantee all warships and trade ships a pass through in order to access Bristol Harbor. This forced the city to rebuild and adjust several bridges in Bristol and it was then suggested to build a completely new bridge at the narrowest location of the Avon Gorge above the required height.

A competition for a Stone Bridge

Plans for a stone bridge were established by William Bridges, but the French Revolutionary Wars broke out and due to the fact that a stone bridge would have cost ten times the gathered money, the plans were put on ice for a while. A competition was then held to solve the problem and a total of 22 concepts were submitted. Famous engineers made submissions, like Samuel Brown or William Tierney Clark, but only five were transferred to Thomas Telford,[4] a civil engineer who was appointed to make the final decision. Unfortunately, he had to turn down the last five submissions as well. When the parliament allowed to build a suspension bridge instead of stone in order to reduce the costs, Isambard Kingdom Brunel made another submission. The local press supported his ideas and he was announced the winner and awarded a contract as the project engineer.

The first attempt to build the bridge according to Brunel’s design failed in 1831 due to civil war-like uprisings in Bristol. Work was interrupted and resumed in 1836. The raw towers were completed in 1843, but the money was also finished. In 1851 the iron parts were sold and used to build the Royal Albert Bridge, also designed by Brunel. Brunel died in 1859 at the age of 53, without seeing his bridge completed. Brunel’s colleagues at the Institution of Civil Engineers thought the Clifton Suspension Bridge would be an excellent monument to the great engineer and began to raise funds to complete the bridge. In 1860, Brunel’s Hungerford Bridge across the Thames in London was demolished to make way for a new railway bridge to Charing Cross station. The suspension chains used there were purchased and reused for the Clifton suspension bridge.

The design was revised by William Henry Barlow and Sir John Hawkshaw. The bridge was to be wider and higher and have a stronger carriageway. The chains were to be triple guided instead of double. The raw stone should be left with the towers and the Egyptian style cladding as well as the original Sphinx heads should be renounced. Work on the bridge was resumed in 1862, so that it could be completed two years later. The bridge was inaugurated and opened to traffic on 8 December 1864 and has been in use without interruption since that date. From the initial day, the bridge was first planned until the completion, 111 years passed.

On this day, the bridge is known for the parachuting events that took place, and for the crossing of the 2012 Olympic Torch relay when two of the torchbearers exchanged the flame in the middle of Brunel’s landmark. For cars the use of the bridge is subject to a charge, pedestrians and cyclists can use it free of charge. At night the bridge is illuminated.