You are here: Home › history › Only the Good Die Young – the Very Short Life of Évariste Galois 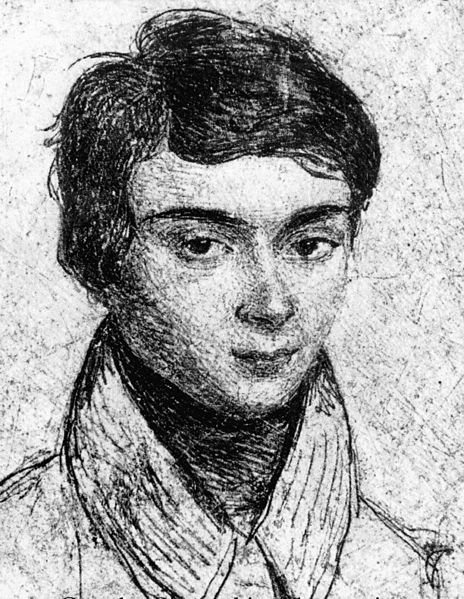 On June 1st, 1832, French mathematician Évariste Galois was killed in a duel. He was only 20 years of age. He left an elaborate manuscript three years earlier, in which he established that an algebraic equation is solvable by radicals, if and only if the group of permutations of its roots has a certain structure, thereby solving a problem standing for 350 years. But why did he have to die so young? Just because of a girl…

“… an author never does more damage to his readers than when he hides a difficulty.”
– Èvariste Galois, in the preface of Deux mémoires d’Analyse pure, October 8, 1831, edited by Jules Tannery (1908). Manuscrits de Évariste Galois. Gauthier-Villars. p. 27.

All because of a Girl

Her name was Stéphanie-Félicie Poterine du Motel, the daughter of a physician. But, there have been rumors that the duel has been set up by his political opponents while this could never be proven. His opponent was a well known shootist and also some people say that Galois has committed suicide because of the unhappy romance. So in the night before his duel Galois demanded his friend Auguste Chevalier to forward his mathematical writings to Carl Friedrich Gauss and Carl Gustav Jacobi, the two leading mathematicians of the time, and commented his writings with the note “Je n’ai pas le temps” (I do not have the time…).[2,3] With a shot in the abdomen, he died the next morning in the Cochin hospital.  His last words to his younger brother Alfred were:

Galois was born on 25 October 1811 to Nicolas-Gabriel Galois and Adélaïde-Marie (born Demante). His father was a Republican and was head of Bourg-la-Reine’s liberal party. His father became mayor of the village after Louis XVIII returned to the throne in 1814. His mother, the daughter of a jurist, was a fluent reader of Latin and classical literature and was responsible for her son’s education for his first twelve years. At the age of 10, Galois was offered a place at the college of Reims, but his mother preferred to keep him at home.

Age 17 – The Core of the Galois Theory

Galois attended the College Louis-le-Grand in Paris, failed the entrance examination to the École polytechnique twice and began his studies at the École normale supérieure. At the age of 17 he published his first work on continued fractions; shortly afterwards he submitted a paper to the Académie des Sciences on the resolution of equations, which contained the core of the Galois theory named after him today. The Academy rejected the manuscript but encouraged Galois to submit an improved and expanded version. This process was repeated twice with the participation of Augustin-Louis Cauchy, Joseph Fourier and Siméon Denis Poisson. Galois reacted bitterly, accusing the Academy of embezzling manuscripts and deciding to have his work printed at his own expense.[5,6,7]

As a Republican, Galois was disappointed by the outcome of the July Revolution and became politically increasingly exposed; he was expelled from his college and arrested twice. The first arrest for a toast to the new King Louis-Philippe, made at a banquet with a bare knife in his hand, as a hidden death threat, was followed by an acquittal on 15 June 1831. Only a month later, Galois took part in a demonstration on 14 July in the uniform of the artillery guard, now disbanded for political unreliability and heavily armed, was arrested again and sentenced to six months in prison in Sainte-Pélagie after three months in custody. In March 1832 he was transferred with other prisoners to Sieur Faultrier Sanatorium due to a cholera epidemic. He was released from custody on 29 April.

Galois founded the Galois Theory named after him for the solution of algebraic equations. While many mathematicians before Galois gave consideration to what are now known as groups, it was Galois who was the first to use the word group as understood today, making him among the founders of the branch of algebra known as group theory. He developed the concept that is today known as a normal subgroup. He also introduced the concept of a finite field also known as a Galois field in his honor. 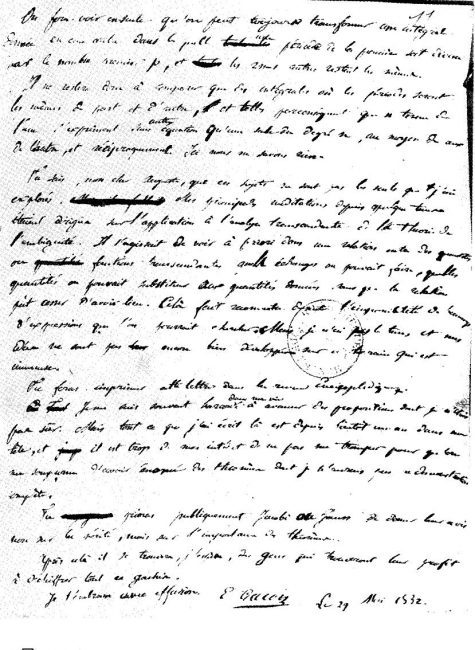 The final page of Galois’s mathematical testament, in his own hand. The phrase “to decipher all this mess” (“déchiffrer tout ce gâchis”) is on the second to the last line.

Joseph Liouville, who saw the connection with Cauchy’s theory of permutations and published it in his journal, only recognized the significance of the writings in 1843. Because of the concepts and sentences he found, Galois is one of the founders of group theory. In recognition of his fundamental work, the mathematical structures Galois body and Galois compound were named after him. Like other particularly famous mathematicians, a symbol is dedicated to him: GF(q) stands for Galois Field (galoy body) with q elements and is as established in literature as the Gaussian bracket or the Kronecker symbol.

He also provided the basis for proofs of the general unsolvability of two of the three classical problems of ancient mathematics, the tripartition of the angle and the doubling of the cube (each with compass and ruler, i.e. with square roots and linear equations).  The third problem, squaring the circle, was solved by proving the transcendence of pi by Ferdinand Lindemann.

The Memoirs and Legacy of Évariste Galois – Dr Peter Neumann, [9]

Related Articles in the yovisto Blog: