You are here: Home › mathematics › Karl Weierstrass – the Father of Modern Analysis 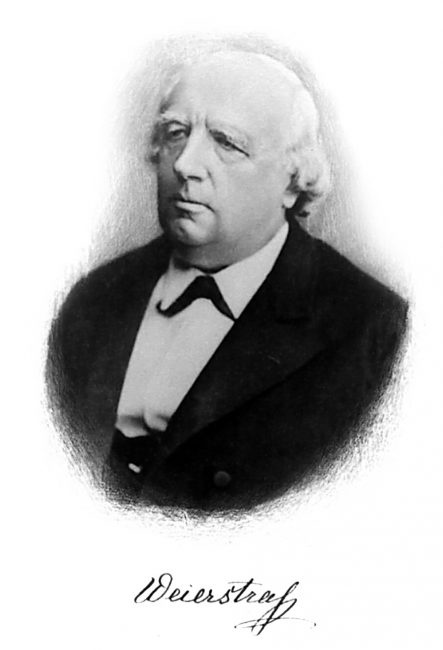 On February 19, 1897, German mathematician Karl Theodor Wilhelm Weierstrass passed away. Weierstrass often is cited as the “father of modern analysis“. He formalized the definition of the continuity of a function, proved the intermediate value theorem and the Bolzano–Weierstrass theorem, and used the latter to study the properties of continuous functions on closed bounded intervals.

“… it is true that a mathematician who is not somewhat of a poet, will never be a perfect mathematician.”
— Karl Weierstrass in a letter to Sofia Kovalevskaya, August 27, 1883 [15]

Karl Weierstrass was born in Ostenfelde, part of Ennigerloh, Province of Westphalia, the son of Wilhelm Weierstrass, secretary to the mayor of Ostenfelde by the time of Karl’s birth and later a tax inspector, and Theodora Vonderforst. His interest in mathematics began while he was a gymnasium student at the Theodorianum in Paderborn, where he regularly read Crelle’s Journal and also gave mathematical tuition to one of his brothers. However Weierstrass’s father wished him to study finance and so, after graduating from the Gymnasium in 1834, he entered the University of Bonn with a course planned out for him which included the study of law, finance and economics. Weierstrass was immediately in conflict with his original hopes to study mathematics. He resolved the conflict by paying little heed to his planned course of study, but continued private study in mathematics. Weierstrass did study mathematics on his own, however, reading Laplace’s Mécanique céleste [2] and then a work by Jacobi on elliptic functions [3].

Weierstrass had made a decision to become a mathematician but he was still supposed to be on a course studying public finance and administration. After his decision, he spent one further semester at the University of Bonn, his eighth semester ending in 1838, and having failed to study the subjects he was enrolled for he simply left the University without taking the examinations. After that he studied mathematics at the Theological and Philosophical Academy of Münster and his father was able to obtain a place for him in a teacher training school in Münster, where he was later certified as a secondary school teacher.

From Dizziness to Sickness

In 1843 he taught in Deutsch Krone in West Prussia and since 1848 he taught at the Lyceum Hosianum in Braunsberg. Besides mathematics he also taught physics, botany, and even gymnastics. From around 1850 Weierstrass began to suffer from attacks of dizziness which were very severe and which ended after about an hour in violent sickness. Frequent attacks over a period of about 12 years made it difficult for him to work and it is thought that these problems may well have been caused by the mental conflicts he had suffered as a student, together with the stress of applying himself to mathematics in every free minute of his time while undertaking the demanding teaching job.[1]

On the Theory of Abel’s Functions

In complete isolation from the mathematical world, Weierstrass worked intensively on his theory of Abel’s functions (direct generalizations of elliptical functions) and published in the journal of his school. However, it was not until an essay in Crelle’s Journal in 1854 On the Theory of Abel’s Functions, which was followed by a more detailed work in 1856, that attention was drawn. As a result, he received an honorary doctorate from the Albertus University of Königsberg in the same year, and the leading Berlin mathematicians Peter Gustav Lejeune Dirichlet [6] and Ernst Eduard Kummer [7] tried to move him to Berlin.

Professor of Mathematics in Berlin

Since 1856 Weierstrass taught mathematics at the Königlichen Gewerbeinstitut (1879 integrated into the Technische Hochschule Berlin), but in the same year he became professor at the Friedrich-Wilhelms-Universität Berlin. There, a large school soon formed around him, whose characteristic feature was the introduction of “Swiss rigour” into the analysis. Even more so than through his publications, he worked through the numerous widely circulating transcripts of his lectures by his students, such as Wilhelm Killing or Adolf Hurwitz. He initially got along well with his Berlin colleague Leopold Kronecker [8], but in 1877 there was a disagreement due to his rejection of the set theory of Weierstrass’s pupil Georg Cantor [9].

Weierstrass, who never married, had a special relationship with his Russian pupil Sofia Kovalevskaya [10], whom he taught privately from 1870 onwards, since she was not admitted to the university as a woman. He exerted his influence so that she was able to obtain her doctorate in Göttingen in 1874 and to take up a position as a private lecturer in Stockholm in 1884. Until her death in 1891 he remained in constant correspondence with her.

Weierstrass was interested in the soundness of calculus, and at the time, there were somewhat ambiguous definitions regarding the foundations of calculus, and hence important theorems could not be proven with sufficient rigor. While Bolzano had developed a reasonably rigorous definition of a limit as early as 1817 (and possibly even earlier) his work remained unknown to most of the mathematical community until years later, and many mathematicians had only vague definitions of limits and continuity of functions. Delta-epsilon proofs are first found in the works of Cauchy in the 1820s, who did not clearly distinguish between continuity and uniform continuity on an interval. Notably, in his 1821 Cours d’analyse, Cauchy argued that the (pointwise) limit of (pointwise) continuous functions was itself (pointwise) continuous, a statement interpreted as being incorrect by many scholars. The correct statement is rather that the uniform limit of continuous functions is continuous (also, the uniform limit of uniformly continuous functions is uniformly continuous). This required the concept of uniform convergence, which was first observed by Weierstrass’s advisor, Christoph Gudermann in 1838. Weierstrass saw the importance of the concept, and both formalized it and applied it widely throughout the foundations of calculus.

The General Theory of Analytic Functions

Weierstrass also made significant advancements in the field of calculus of variations. Using the apparatus of analysis that he helped to develop, Weierstrass was able to give a complete reformulation of the theory which paved the way for the modern study of the calculus of variations. In Weierstrass’ 1863/64 course on The general theory of analytic functions he began to formulate his theory of the real numbers. In his 1863 lectures he proved that the complex numbers are the only commutative algebraic extension of the real numbers. In 1872 his emphasis on rigor led him to discover a function that, although continuous, had no derivative at any point. Analysts who depended heavily upon intuition for their discoveries were rather dismayed at this counter-intuitive function. Riemann had suggested in 1861 that such a function could be found, but his example failed to be non-differentiable at all points.

Strongly Affecting the Future of Mathematics

Karl Weierstrass died on 19 February 1897 in Berlin from pneumonia at age 81.