You are here: Home › mathematics › Georg Cantor and the Beauty of Infinity 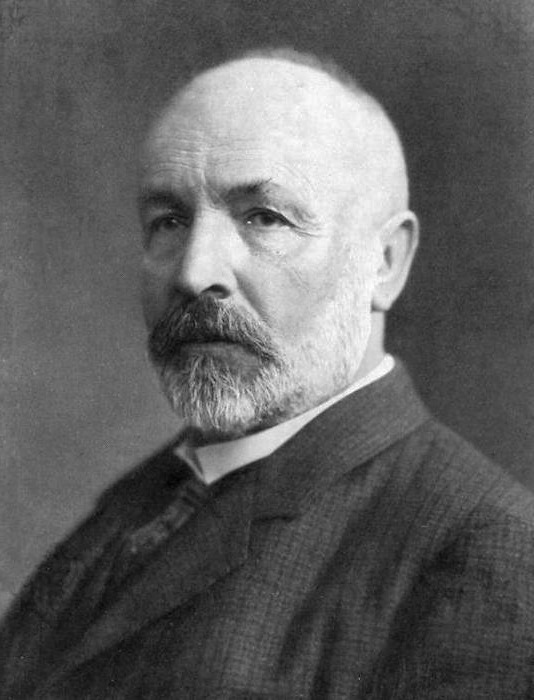 On March 3, 1845, German mathematician Georg Cantor, creator of the set theory was born. Set Theory is considered the fundamental theory of mathematics. He also proved that the real numbers are “more numerous” than the natural numbers, which was quite shocking for his contemporaries that there should be different numbers of infinity.

Georg Cantor was born in 1845 in the western merchant colony in Saint Petersburg, Russia. His father, Georg Waldemar Cantor, was a successful merchant, working as a wholesaling agent and later as a broker in the St Petersburg Stock Exchange. When his father became ill, the family moved to Germany in 1856, first to Wiesbaden then to Frankfurt, seeking winters milder than those of Saint Petersburg. In 1860, Cantor graduated from the Realschule in Darmstadt with an outstanding report, which mentioned in particular his exceptional skills in mathematics, in particular trigonometry. In 1862, Cantor entered the University of Zürich to study mathematics. After receiving a substantial inheritance upon his father’s death in 1863, Cantor shifted his studies to the University of Berlin, attending lectures by Leopold Kronecker [3], Karl Weierstrass [4] and Ernst Kummer [5]. He spent the summer of 1866 at the University of Göttingen, then and later a center for mathematical research. In 1867, Cantor completed his dissertation in number theory with the title “De aequationibus secundi gradus indeterminatis“, under the supervision of Eduard Kummer and Karl Weierstrass [7], at the University of Berlin.

Cantor first taught at a girl’s school in Berlin and in 1868, he joined the Schellbach Seminar for mathematics teachers. During this time he worked on his habilitation and, immediately after being appointed to Halle in 1869, where he spent his entire career, he presented his thesis, again on number theory, and received his habilitation. In 1872 Cantor was promoted to Extraordinary Professor at Halle and 1879 became Full Professor.

The Origins of Set Theory

Cantor’s work between 1874 and 1884 is the origin of set theory. Prior to this work, the concept of a set was a rather elementary one that had been used implicitly since the beginnings of mathematics, dating back to the ideas of Aristotle. No one had realized that set theory had any nontrivial content. Before Cantor, there were only finite sets, which are easy to understand, and “the infinite”, which was considered a topic for philosophical, rather than mathematical, discussion. Cantor succeeded in proving that there are many possible sizes for infinite sets – even infinitely many. Thereby, he established that set theory was anything else but trivial, and that it needed to be studied. In the course of this study, set theory has become a foundational theory in modern mathematics, in the sense that it interprets propositions about mathematical objects from all areas of mathematics in a single theory, and provides a standard set of axioms to prove or disprove them.

“A set is a Many that allows itself to be thought of as a One.”
– Georg Cantor, as quoted in Infinity and the Mind (1995) by Rudy Rucker.

The Rational Numbers are Countable

The beginning of set theory as a branch of mathematics is often marked by the publication of Cantor’s 1874 paper, “Ueber eine Eigenschaft des Inbegriffes aller reellen algebraischen Zahlen” (“On a Property of the Collection of All Real Algebraic Numbers”). This paper was the first to provide a rigorous proof that there was more than one kind of infinity. A first step towards Cantor’s set theory already was his 1873 proof that the rational numbers are countable, i.e. they may be placed in one-one correspondence with the natural numbers – and therefore their count is equal. However, when he tried to extend his proof to real numbers, he was facing difficulties. To decide whether the real numbers were countable proved much harder. But in December 1873 he succeeded with the counter argument and proved that the real numbers were not countable. Cantor proved that the collection of real numbers and the collection of positive integers are not equinumerous, i.e. having the same number of elements.

In 1891, he published a paper containing his elegant “diagonal argument” for the existence of an uncountable set. He applied the same idea to prove Cantor’s theorem: the cardinality of the power set of a set A is strictly larger than the cardinality of A. This established the richness of the hierarchy of infinite sets, and of the cardinal and ordinal arithmetic that Cantor had defined. His argument is fundamental in the solution of the Halting problem and the proof of Gödel‘s first incompleteness theorem.[9]

Also related with the problem of infinite sets is the famous continuum hypothesis – There is no set whose cardinality is strictly between that of the integers and the real numbers – introduced by Cantor in 1878. It was presented by David Hilbert as the first of his twenty-three open problems in his famous address at the 1900 International Congress of Mathematicians in Paris…but this is already another story [8].

“The fear of infinity is a form of myopia that destroys the possibility of seeing the actual infinite, even though it in its highest form has created and sustains us, and in its secondary transfinite forms occurs all around us and even inhabits our minds.”
– Georg Cantor, as quoted in Infinity and the Mind (1995) by Rudy Rucker.

In 1911, Cantor was one of the distinguished foreign scholars invited to attend the 500th anniversary of the founding of the University of St. Andrews in Scotland. Cantor retired in 1913, living in poverty and suffering from malnourishment during World War I. The public celebration of his 70th birthday was canceled because of the war. In June 1917, he entered a sanatorium for the last time and continually wrote to his wife asking to be allowed to go home. Georg Cantor had a fatal heart attack on January 6, 1918.

…the finest product of mathematical genius and one of the supreme achievements of purely intellectual human activity.