You are here: Home › physics › Ernst Mach and the eponymous Mach Number 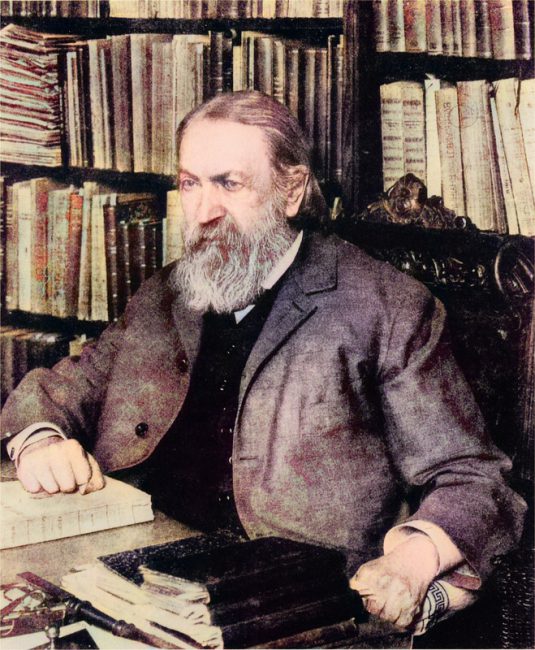 On February 18, 1838, Austrian physicist and philosopher Ernst Mach was born. Mach is noted for his contributions to physics such as study of shock waves. The ratio of one’s speed to that of sound is named the Mach number in his honor. As a philosopher of science, he was a major influence on logical positivism and American pragmatism.

“There is no problem in all mathematics that cannot be solved by direct counting. But with the present implements of mathematics many operations can be performed in a few minutes which without mathematical methods would take a lifetime.”
— Ernst Mach, in Popular Scientific Lectures [McCormack] (Chicago, 1898)p. 197; On mathematics and counting.

Ernst Mach, born 1838 in Chirlitz near Brno and christened Tuřany, belonged to a family of the German-speaking minority in Moravia. Until the age of 15, Ernst Mach’s school education consisted essentially of instruction by his parents. In his first ten years, Mach was taught exclusively by his father. After attending the Stiftsgymnasium Seitenstetten for one year in 1848, he went back to school with his father, who also taught him agricultural work. At this time he also completed an apprenticeship as a cabinetmaker. Ernst Mach enrolled at the University of Vienna in 1855. He studied physics, and briefly medical physiology. In 1860 he received his doctorate in physics under Andreas von Ettingshausen with a thesis “On electric charges and induction“. During the first years as a scientist, Ernst Mach researched on the Doppler effect, optics, and acoustics [1]. Mach was appointed Professor of Mathematics at the University of Graz in 1864. Two years later he was appointed professor of physics. In 1867, Mach took the chair of Experimental Physics at the Charles University, Prague, where he stayed for 28 years before returning to Vienna.

Ernst Mach’s contributions to the field of physics are wide ranged. Most of Mach’s initial studies in the field of experimental physics concentrated on the interference, diffraction, polarization and refraction of light in different media under external influences. On that foundation, Mach was able to explore the field of supersonic fluid mechanics. Mach and physicist-photographer Peter Salcher presented their paper describing the sound effects observed during the supersonic motion of a projectile in 1887. They deduced and experimentally confirmed the existence of a shock wave of conical shape, with the projectile at the apex. The ratio of the speed of a fluid to the local speed of sound vp/vs is now called the Mach number. It is a critical parameter in the description of high-speed fluid movement in aerodynamics and hydrodynamics.

Mach described how when a bullet or shell moved faster than the speed of sound, it created a compression of air in front of it. Using Schlieren photography, he and his son Ludwig were able to photograph the shadows of the invisible shock waves. During the early 1890s Ludwig was able to invent an interferometer which allowed for much clearer photographs. But Mach also made many contributions to psychology and physiology, including his anticipation of gestalt phenomena, his discovery of the oblique effect and of Mach bands, an inhibition-influenced type of visual illusion, and especially his discovery of a non-acoustic function of the inner ear which helps control human balance. 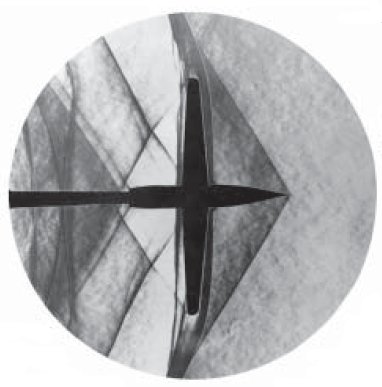 Schlierenfoto of an airplane model at Mach 1,2 in a wind tunnel

Mach also became well known for his philosophy developed in close interplay with his science. Mach defended a type of phenomenalism recognizing only sensations as real. This position seemed incompatible with the view of atoms and molecules as external, mind-independent things. He famously declared, after an 1897 lecture by Ludwig Boltzmann at the Imperial Academy of Science in Vienna: “I don’t believe that atoms exist!” [8] From about 1908 to 1911 Mach’s reluctance to acknowledge the reality of atoms was criticized by Max Planck as being incompatible with physics. Einstein’s 1905 demonstration that the statistical fluctuations of atoms allowed measurement of their existence without direct individuated sensory evidence marked a turning point in the acceptance of atomic theory.

Ernst Mach is also regarded as a pioneer of relativity theory: in 1872 Mach discovered that the inertia of a body can only be ascertained if there are other masses in the universe as a reference for measuring acceleration. Only presence of other masses produces inertia (Mach principle). In 1898 Mach suffered from cardiac arrest and in 1901 retired from the University of Vienna and was appointed to the upper chamber of the Austrian parliament. On leaving Vienna in 1913 he moved to his son’s home in Vaterstetten, near Munich, where he continued writing and corresponding until his death in 1916, only one day after his 78th birthday.

In the theory of science, he understood science as a means of describing the world and the feelings of people as simply and neutrally as possible. In addition, as the guiding culture of science, he demanded reductionism without compromise. For this reason he regarded physics and psychology as the actual basis of an enlightened understanding of the world. Theories, like psychological ones, are only mathematically organized descriptions of nature. Discussions about the truth content of theories are therefore superfluous. Only the benefit is relevant. Truth does not exist for itself, but as a temporary discussion truth that comes about according to evolutionary laws: Only the strongest, i.e. most economic and empirically clearest, ideas prevail.