You are here: Home › mathematics › Sofia Kovalevskaya – Mathematician and Writer 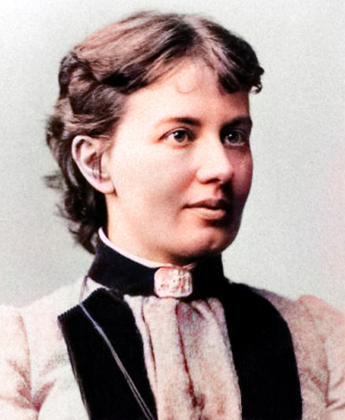 On January 15, 1850, Russian mathematician Sofia Kovalevskaya was born. Kovalevskaya was responsible for important original contributions to analysis, partial differential equations and mechanics, and the first woman appointed to a full professorship in Northern Europe.

“Say what you know, do what you must, come what may.”
— Sofia Kovaleveskaya, Motto on her paper “On the Problem of the Rotation of a Solid Body about a Fixed Point.” (1886)

Sofia Kovalevskaya was born as Sofia Korvin-Krukovskaya in Moscow, the second of three children to Vasily Vasilyevich Korvin-Krukovsky, Lieutenant-General of Artillery, and Yelizaveta Fedorovna Schubert. Sofia was attracted to mathematics at a very young age. When she was 11 years old, the wall of her room had been papered with pages from lecture notes of differential and integral analysis, which was her early preparation for calculus. They nurtured her interest in mathematics and hired a private tutor, who taught her calculus. During that same period, the son of the local priest introduced her to nihilism.

Despite her obvious talent for mathematics, she could not complete her education in Russia, since women were not allowed to attend universities there. In order to study abroad, she needed written permission from her father, who would not allow her to leave home. The alternative was to get married. Accordingly, she contracted a “fictitious marriage” with Vladimir Kovalevskij, then a young paleontology student who would later become famous for his collaboration with Charles Darwin. They emigrated from Russia in 1867. This marriage caused problems for Sofia and, throughout its fifteen years, it was a source of intermittent sorrow, exasperation and tension and her concentration was broken by her frequent quarrels and misunderstandings with her husband.[1]

“It is impossible to be a mathematician without being a poet in soul.”
– Sofia Kovalevskaya, in [14]

The couple remained in Petersburg for the first few months of their marriage and then traveled to Heidelberg where Sofia gained a small fame. People were enthralled by the quiet Russian girl with an outstanding academic reputation.[2] After two years of mathematical studies at Heidelberg under such teachers as Hermann von Helmholtz, Gustav Kirchhoff and Robert Bunsen, she moved to Berlin, where she had to take private lessons from Karl Weierstrass, as the university would not even allow her to audit classes [7,8,10]. In 1874 she presented three papers – on partial differential equations, on the dynamics of Saturn‘s rings and on elliptic integrals – to the University of Göttingen as her doctoral dissertation. With the support of Weierstrass, this earned her a doctorate in mathematics summa cum laude, bypassing the usual required lectures and examinations.[11]

Her Sex was a Major Handicap

Despite this doctorate and letters of strong recommendation from Weierstrass, Kovalevskaya was unable to obtain an academic position. This was for a combination of reasons, but her sex was a major handicap. Her rejections resulted in a six year period during which time she neither undertook research nor replied to Weierstrass’s letters. She was bitter to discover that the best job she was offered was teaching arithmetic to elementary classes of school girls.[1]

In the early 1880s, Sofia and her husband Vladimir developed financial problems. Soon after, Vladimir started a house building business with Sofia as his assistant. In 1879, the price for mortgages became higher and they became bankrupt. Shortly after, Vladimir got a job offer and Sofia helped neighbours to electrify street lights. Vladimir and Sofia quickly established themselves again financially. The Kovalevskiys returned to Russia, but failed to secure professorships because of their radical political beliefs. Discouraged, they went back to Germany. Vladimir, who had always suffered severe mood swings, became more unstable, so they spent most of their time apart. Then, for some unknown reason, perhaps it was the death of her father, they decided to spend several years together as an actual married couple.

In 1878, Kovalevskaya gave birth to a daughter, but from 1880 increasingly returned to her study of mathematics. In 1882 she began work on the refraction of light, and wrote three articles on the topic. In 1883, faced with worsening mood swings and the possibility of being prosecuted for his role in a stock swindle, Vladimir committed suicide. After the initial shock, Kovalevskaya immersed herself in mathematical work in an attempt to rid herself of feelings of guilt. That year, with the help of the mathematician Gösta Mittag-Leffler,[9] whom she had known as a fellow student of Weierstrass’, Kovalevskaya was able to secure a position as a privat-docent at Stockholm University in Sweden. Until Kovalevskaya’s death the two women shared a close friendship that was interpreted by some authors as a possibly romantic or even sexual relationship. She began to lecture at Stockholm University in early 1884, was appointed to a five year extraordinary professorship in June of that year, and in June 1889 became the first woman since the physicist Laura Bassi and Maria Gaetana Agnesi to hold a chair at a European university.[1]

In 1884 she joined the editorial board of the mathematical journal Acta Mathematica, and in 1888 she became the first woman to be elected a corresponding member of the Russian Academy of Sciences. In 1886 Kovalevskaya succeeded in solving a special case of the problem of the rotation of solid bodies around a fixed point. In 1888 she was awarded the Prix Bordin of the French Academy of Sciences for a paper on the rotation of a solid body around a fixed point. Kovalevskaya wrote several non-mathematical works as well, including a memoir, A Russian Childhood (1890) in collaboration with Duchess Anne Charlotte Edgren-Leffler and a partly autobiographical novel, Nihilist Woman (1892), a depiction of her life in Russia. Sofia Kovalevskaia died of influenza complicated by pneumonia in 1891 at age forty-one.