You are here: Home › art › Johann Heinrich Füssli and the Rise of Romanticism 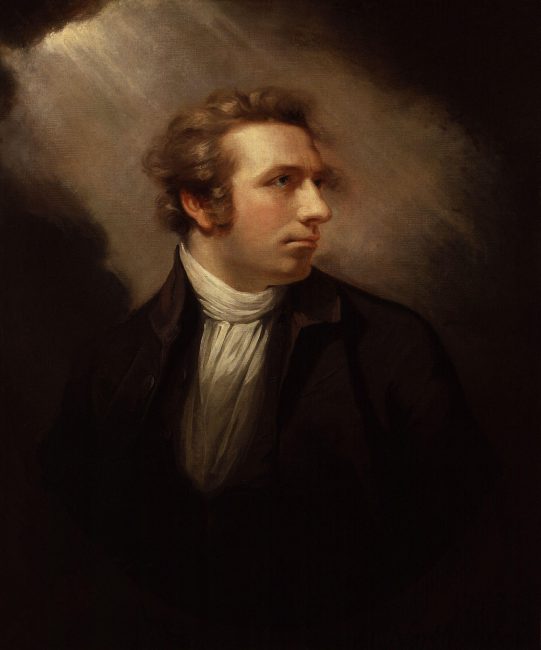 On February 7, 1741, Swiss-English painter and publicist Johann Heinrich Füssli – in the UK better known as Henry Fuseli – was born. Many of his works, such as The Nightmare, deal with supernatural subject-matter. He painted works for John Boydell‘s Shakespeare Gallery, and created his own “Milton Gallery”. His style had a considerable influence on many younger British artists, including William Blake.

Johann Heinrich Füssli was born in Zürich, Switzerland, the second of 18 children of the painter and writer Johann Caspar Füssli (1707-1782) and his wife Elisabeth Waser. His sisters Elisabeth and Anna Füssli later became flower painters. Füssli received his first artistic instruction from his father, whose love for art and literature was passed on to his son. He later dealt with the writings of his friend Johann Joachim Winckelmann (1717-1768) on several occasions, most recently in a rather critical manner.[1] His father intended Füssli for the church, and sent him to the Caroline college of Zurich, where he received an excellent classical education. One of his schoolmates there was Johann Kaspar Lavater, with whom he became close friends.[2]

Füssli spent many hours making sketches of the drawings in his father’s collection, a practice he continued well into his teens. His father, somewhat surprisingly given his own profession, disapproved of Füssli’s artistic ambitions.[3] Thus, Füssli first studied theology and gained a good knowledge of ancient and modern languages, but at the same time he also devoted himself to painting, being influenced by Johann Jakob Bodmer, who introduced him to the works of Homer, Dante Alighieri, William Shakespeare, and John Milton. In 1761 he received ordination as a Protestant Reformed clergyman. At the age of 20 he became a pastor in Zurich, but in 1763, after collaborating with Lavater on a pamphlet against the then bailiff of Grüningen, Felix Grebel, to expose him an unjust magistrate, Grebel’s powerful family sought revenge and Füssli had to leave Zurich. He crossed the border into Germany where he fell under the influence of the German Enlightenment.[3] First he stayed for some time with the theologian Johann Joachim Spalding in Barth (Western Pomerania).

Having become acquainted with the English envoy in Berlin through the translation of some of Shakespeare’s plays, he went to London at his instigation in 1765. Here, too, he first worked as a translator for various publishers. His first major translation was J. J. Winkelmann’s Betrachtungen über die Malerei und Bildhauerkunst der Griechen, (Reflections on the painting and sculpture of the Greeks) published in 1765. The German neoclassicist was revered by many as the “prophet and founding hero of modern archaeology” and the father of modern art history. Further, he also translated a book on the French philosopher Jean-Jacques Rousseau, Remarks on the Writing and Conduct of J. J. Rousseau, published in 1767.[3,4]

“Taste is the legitimate offspring of nature, educated by propriety: fashion is the bastard of vanity, dressed by art.”
– Henry Fuseli

In 1767 he met Joshua Reynolds, first president of the Royal Academy, who advised him to exchange the pen for the brush and encouraged him to further studies in Italy . In 1770 Füssli went to Rome, where he associated with Anton Raphael Mengs. There, in addition to antiquities, he studied primarily the works of Michelangelo and the Mannerists, as well as Greek and Roman antiquities. It was while in Italy that he also changed his name from the German spelling of Füssli to the Italian, Fuseli. By 1773 Fuseli was already making a name for himself in Rome with a strong connection to the German proto-Romantic Sturm und Drang movement. This movement championed the freedom of subjective expression over the rationalism that had helped define the new era of Enlightenment. Johann Wolfgang von Goethe,[5] a protagonist of the movement, and admirer and collector of his drawings, saw Fuseli as the visual embodiment of the movement, saying of his art: “What fury the man has in him“. When he returned to London in 1779, he was already a celebrated artist there alongside Reynolds and Benjamin West. 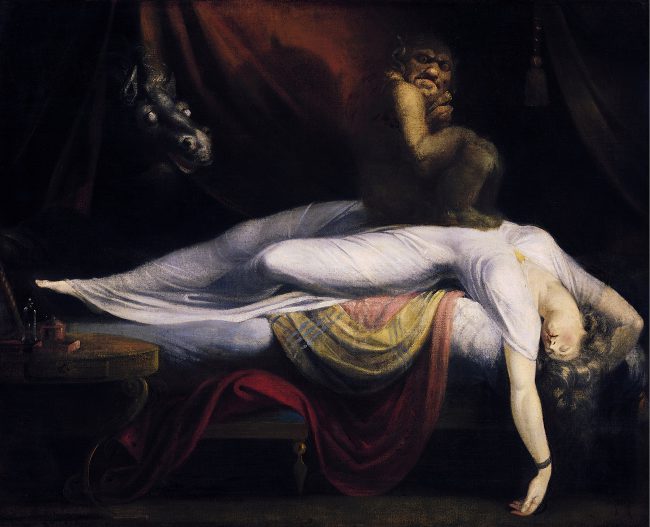 In his work, Füssli repeatedly thematized the world of dreams and visions, often of horror, and he is inspired by English ghost stories. In his paintings, the concrete world of the external loses its fascination to the world of the subject. He exhibited his iconic painting The Nightmare in at the 1783 Royal Academy’s Summer Exhibition. The painting’s dreamlike and haunting erotic evocation of infatuation and obsession was a huge popular success. Critics and patrons reacted with horrified fascination and the work became widely popular, to the extent that it was parodied in political satire. Engravings of this popular work were sold and provided an important boost to his reputation as an imaginative artist focussing on the psychological depiction of mental states.[3] Füssli produced at least three other versions.

Career at the Royal Academy

In 1788 he was admitted to the Royal Academy of Arts. In 1788 he married Miss Rawlins and they moved to No. 72 Queen Anne Street (later Fowley Street). In 1790 Füssli submitted his oil painting “Thor’s Struggle with the Midgard Serpent” to the Royal Academy as a thesis, which was accepted, and with which he was elected R.A. (full member) on February 10. In 1799-1805 and again from 1810 to 1825 he was Professor of Painting. From 1804 to 1825 he was further Keeper of the Academy, being appointed to this office by the intervention of George III in place of Robert Smirke, who had originally been nominated. He now also devoted himself to the preparation of various writings on painting. A notorious lady’s man, Fuseli is also reputed to have had a sexual relationship with Mary Wollstonecraft, the early feminist and mother of Frankenstein author Mary Shelley.[3]

“Art, like love, excludes all competition and absorbs the man.”
– Henry Fuseli

John Boydell, the eminent engraver and publisher of the period, commissioned a number of important artists, including Sir Joshua Reynolds, to illustrate scenes from Shakespeare with the goal of producing an illustrated companion for his plays. Fuseli, who had fallen in love with the London Theatre, and especially the plays of Shakespeare, contributed a total of nine paintings, including three inspired by A Midsummer Night’s Dream. Though not noted as a colorist, Fuseli was described as a master of light and shadow. Rather than setting out his palette methodically in the manner of most painters, he merely distributed the colors across it randomly. He often used his pigments in the form of a dry powder, which he hastily combined on the end of his brush with oil, or turpentine, or gold size, regardless of the quantity, and depending on accident for the general effect. In 1799 Fuseli exhibited a series of paintings from subjects furnished by the works of John Milton, with a view to forming a Milton gallery comparable to Boydell’s Shakespeare gallery. There were 47 Milton paintings, many of them very large, completed at intervals over nine years. The exhibition proved a commercial failure and closed in 1800.

On Sunday, April 10, 1825, Füssli stayed at Putney Hill with the Countess of Guildford and had to cancel his appointment for the evening with Mr. Samuel Rogers in London. On Monday his physicians Mr. Alexander Chrichton and Dr. Holland were called in, but they could not name his illness. On Wednesday he still spoke to Mr. John Knowles, who also became his executor, and died the next day at the age of 84. The remains were removed from Putney Hill to Somerset House. Overall, Fuseli painted more than 200 pictures, but he exhibited only a small number of them. His sketches or designs numbered about 800; they have admirable qualities of invention and design, and are frequently superior to his paintings. In his drawings, as in his paintings, his method included deliberately exaggerating the proportions of the human body and throwing his figures into contorted attitudes.

Jonathan Bate, The Origins of Romanticism, [9]