You are here: Home › physics › Benjamin Franklin and the Invention of the Lightning Rod 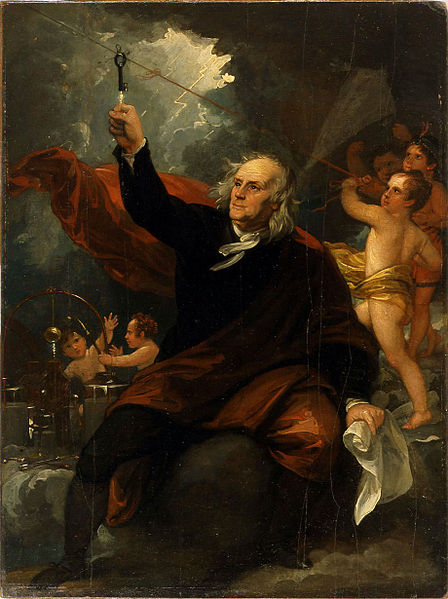 On June 15, 1752, Benjamin Franklin proved that lightning is electricity and invented the lightning rod through his experiments with kites.

As you might know for sure, Benjamin Franklin was not only an enthusiastic scientist, inventor, and author, but also one of the Founding Fathers of the United States. His roots lay back in Boston, where he was born in 1706 as the son of a chandler. He was one of seventeen children born to Josiah Franklin, and one of ten born by Josiah’s second wife, Abiah Folger. Therefore the family could not afford the adequate education for all of their 17 children. To prepare him for Harvard studies and a later career as a pastor, Josiah sent his son Benjamin to the Boston Latin School at the age of eight. There he showed his high talent at an early age. He was one of the best students and skipped a class. Despite these successes, his father enrolled him for a year in another school, where he was to learn writing and arithmetic. While Benjamin Franklin claimed in his autobiography that this was solely due to his father’s low income, biographers like Walter Isaacson assume that Josiah Franklin recognized the rebellious nature of his son early on and therefore decided that he was unsuitable for a spiritual career. Franklin attended school for about two years, then educated himself through books and started an apprenticeship to become a printer at the age of 15. Not satisfied with his situation, he ran away and started a new life in Philadelphia, where he founded the Library Company of Philadelphia and hired the very first librarian in America. He became famous for the books he wrote himself and gained popularity in the State of Pennsylvania and beyond.

In 1727, Benjamin Franklin, then 21, created the Junto, a group of “like minded aspiring artisans and tradesmen who hoped to improve themselves while they improved their community.” The Junto was a discussion group for issues of the day; it subsequently gave rise to many organizations in Philadelphia. The Junto was modeled after English coffeehouses that Franklin knew well, and which had become the center of the spread of Enlightenment ideas in Britain. In 1728, Franklin had set up a printing house in partnership with Hugh Meredith; the following year he became the publisher of a newspaper called The Pennsylvania Gazette. Like many other daily newspapers, the Pennsylvania Gazette contained not only news summaries, announcements and reports of events of public interest, but also amusing essays and letters to the editor, many of which Franklin himself had written under a pseudonym. The concept of his newspaper was successful.

As time went on, Franklin depended less on his literary conventions, and more on his own native humor. In this there is a new spirit – not suggested to him by the fine breeding of Addison, or the bitter irony of Swift,[5] or the stinging completeness of Pope. The brilliant little pieces Franklin wrote for his Pennsylvania Gazette have an imperishable place in American literature. In 1731, Franklin was initiated into the local Masonic lodge. He became Grand Master in 1734, indicating his rapid rise to prominence in Pennsylvania.

Throughout his life, Franklin accomplished many inventions, but never held a patent. In his autobiography it says

“That, as we enjoy great advantages from the inventions of others, we should be glad of an opportunity to serve others by any invention of ours; and this we should do freely and generously“.

To his most famous inventions belongs the lightning rod. In 1750 he started his experiments with electricity, and presumed that lightning is electricity. Only two years later he performed a kite experiment, which led to the extraction of sparks from clouds. Being aware of the immense danger of lightening from there, he was able to invent the lightening rod.  On May 10, 1752, Thomas-François Dalibard of France conducted Franklin’s experiment using a 12 m iron rod instead of a kite, and he extracted electrical sparks from a cloud. On June 15, 1752, Franklin may possibly have conducted his well-known kite experiment in Philadelphia, successfully extracting sparks from a cloud. Franklin described the experiment in the Pennsylvania Gazette on October 19, 1752, without mentioning that he himself had performed it. This account was read to the Royal Society on December 21 and printed as such in the Philosophical Transactions.[4] Joseph Priestley published an account with additional details in his 1767 History and Present Status of Electricity.[6] Franklin was careful to stand on an insulator, keeping dry under a roof to avoid the danger of electric shock. Others, such as Prof. Georg Wilhelm Richmann in Russia, were indeed electrocuted in performing lightning experiments during the months immediately following Franklin’s experiment.

According to the 1767 Priestley account, Franklin realized the dangers of using conductive rods and instead used the conductivity of a wet hemp string attached to a kite. This allowed him to stay on the ground while his son assisted him to fly the kite from the shelter of a nearby shed. This enabled Franklin and his son to keep the silk string of the kite dry to insulate them while the hemp string to the kite was allowed to get wet in the rain to provide conductivity. A house key belonging to Benjamin Loxley was attached to the hemp string and connected to a Leyden jar; a silk string was attached to this. “At this key he charged phials, and from the electric fire thus obtained, he kindled spirits, and performed all other electrical experiments which are usually exhibited by an excited globe or tube.” The kite was not struck by visible lightning; had it been, Franklin would almost certainly have been killed. However, Franklin did notice that loose threads of the kite string were repelling each other and deduced that the Leyden jar was being charged. He moved his hand near the key and observed an electric spark, proving the electric nature of lightning.

Franklin once said “if you would not be forgotten, as soon as you are dead and rotten, either write things worth reading, or do things worth the writing” and the people around the globe know that he has accomplished both. He has been honored by the Royal Society in 1753 and again at its 350th anniversary, celebrated in 2010.

Famous author Bill Bryson gave a presentation on occasion of the 350th Anniversary of the Royal Society at Gresham College. In it, he first introduced the Royal Society, its accomplishments as well as its meaning for today’s life. Then he presents – as he puts it – the ‘An even shorter History of nearly Everything‘, starting with the great achievements of Benjamin Franklin.

An Even Shorter History of Nearly Everything – Bill Bryson, [8]