You are here: Home › medical science › Stephen Hales and the Blood Pressure 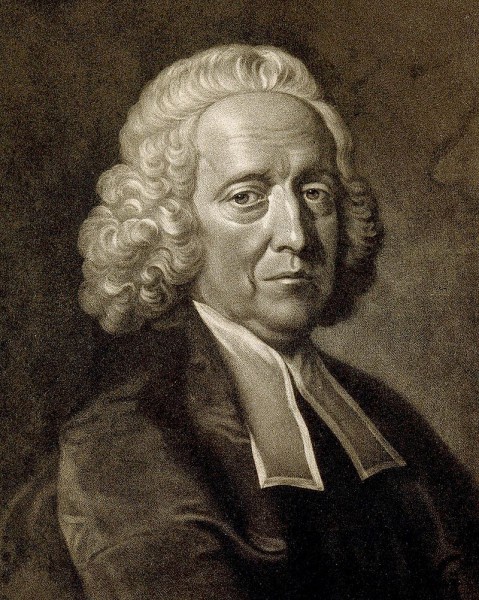 On September 17, 1677, English clergyman Stephen Hales was born. Hales made major contributions to a range of scientific fields including botany, pneumatic chemistry and physiology. He was the first person to measure blood pressure. He also invented several devices, including a ventilator, a pneumatic trough and a surgical forceps for the removal of bladder stones. In addition to these achievements was a philanthropist and wrote a popular tract on alcoholic intemperance.

“We are as yet got little farther than to the surface of things: yet ought we not to be discouraged; though we can never hope to attain to the complete knowledge of the texture, or constituent frame and nature of bodies, yet may we reasonably expect by this method of experiments, to make farther and farther advances abundantly sufficient to reward our pains.”
— Stephen Hales, in ‘Preface’, Statical Essays: Containing Hæmastatics (1769), Vol. 2, ii.

Stephen Hales was born in Bekesbourne, Kent, England, the sixth son of Thomas Hales, heir to Baronetcy of Beakesbourne and Brymore, and his wife, Mary (née Marsham), and was one of twelve or possibly thirteen children. Hales was educated in Kensington and then at Orpington before attending Corpus Christi College, Cambridge in 1696. Although he was an ordinand studying divinity, Hales would have received tuition in the Classics, mathematics, natural sciences and philosophy while in Cambridge. Hales was admitted as a Fellow of Corpus Christi in 1703, the same year as he obtained the degree of Master of Arts, and was ordained as Deacon at Bugden, Cambridgeshire.

He continued his theological and other studies in Cambridge, where he became friends with William Stukeley who was studying medicine and who should later be reknowned as pioneer in the archaeological investigation of the Stonehenge monuments.[4] Together they studied anatomy, attended the physics lectures of William Whiston and the chemistry lectures of Giovanni Francisco Vigani while at Cambridge. His interest in biology, botany and physiology is presumed to date from that time.

The Parish of Teddington

In 1709 he was appointed to the parish of Teddington, where he remained until his death. Nevertheless, Hales retained his Cambridge Fellowship until 1718. In 1718 Hales was elected a Fellow of the Royal Society and in the same year became Rector of Porlock, Somerset, a post he held alongside the curacy of Teddington. In 1723 he was installed as Rector of Farringdon, Hampshire.

Hales introduced new techniques of measurement to the study of plant physiology. One of the best-known of these concerned the measurement of water vapour emitted by plants. He measured this emission, known as transpiration, finding that it was the leaves that transpired and that this process encouraged a continuous upward flow of water and dissolved nutrients from the roots. He determined the direction in which sap flows in plants (it flows upward), and he measured the sap’s pressure. He also measured the rates of growth of shoots and leaves and the pressure roots exert on sap, and he investigated plant respiration.[1]

Hales’s experiments on transpiration — perhaps the most famous and brilliant of those he performed with plants — were carried out in the summer months of 1724. He grew a large sunflower in a garden pot covered tightly with a thin lead plate pierced by the plant, by a small glass tube to allow some communication with the air, and by another short, stoppered tube through which the plant could be watered. He weighed the pot and plant twice a day for fifteen days, then cut off the plant close to the lead plate, cemented the stump, and by weighing determined that the pot with its earth “perspired” two ounces every twelve hours. Subtracting this from his earlier weighings, he found that the plant perspired in that period an average of one pound, four ounces of water.[2] Hales devised several apparatuses which he used to collect the gases that were produced by various chemical reactions; these instruments were forerunners of the pneumatic trough, now used for the same purpose. His research in plant physiology was published in Vegetable Staticks (1727). [1]

The Measurement of Blood Pressure

Together with William Stukeley, Hales performed a wide range of studies including making casts of the trachea and bronchial trees of dogs using molten lead and measuring the water lost due to breathing. Most famously, Hales made measurements of blood pressure in several animal species by inserting fine tubes into arteries and measuring the height to which the column of blood rose. Hales also described the effects of hemorrhage and hemorrhagic shock by progressive exsanguination of animals and accompanying measurement of blood pressure. In addition, Hales took wax casts of the ventricle of the heart and estimated how much blood was pumped by the heart; correctly described the roles of the mitral valve and aortic valve during systole and diastole; explained the pulsations of arteries in terms of their elasticity and attributed the resistance to blood flow to friction due to the passage of blood through small blood vessels.

In 1718, the poet Alexander Pope [5] heavily criticized Hales’ experimentation work on animals. In conversation with his friend, Joseph Spence, Pope reportedly said of Hale: “He commits most of these barbarities with the thought of its being of use to man. But how do we know that we have a right to kill creatures that we are so little above as dogs, for our curiosity, or even for some use to us?“. Pope, however was also a close friend of Hales and considered him the model of the man who loves his God.

Hales also described a diverse range of work in Haemastaticks (1733), describing experiments on animal physiology, including his attempts to find substances that could be used to dissolve bladder stones or calculi. This aim was unsuccessful but as part of this work he developed a double lumen bladder catheter and devised special forceps to enable the removal of urinary stones.

Hales also experimented with ways of distilling fresh water from sea water; preserving water and meat on sea-voyages; measuring depths at sea; measuring high temperatures; and wrote on a range of subjects including earthquakes; methods of preventing the spread of fires; and comparative mortality rates in relationship to rural and urban parishes. Hales was one of the eight Foreign Members of the Royal Academy of Sciences, Paris and was elected a member of the Academy of Sciences of Bologna. He received the Copley Medal in 1739 and also became a public figure as a result of his campaigns against the gin trade and his involvement in the Georgia Trust. He was made a Doctor of Divinity by Oxford University in 1733. Hales died in his 84th year at Teddington on 4 January 1761.