On August 26, 1743, French nobleman and chemist Antoine Laurent de Lavoisier was born. De Lavoisier is considered as one of the fathers of modern chemistry.

“We must trust to nothing but facts: These are presented to us by Nature, and cannot deceive. We ought, in every instance, to submit our reasoning to the test of experiment, and never to search for truth but by the natural road of experiment and observation.”
— Anointe de Lavoisier, Elements of Chemistry (1790)

Born to a wealthy family

Born to a wealthy family in Paris, Antoine-Laurent Lavoisier inherited a large fortune at the age of five with the passing of his mother. His education was filled with the ideals of the French Enlightenment of the time, while he was studying chemistry, botany, astronomy, and mathematics. He was expected to follow in his father’s footsteps and even obtained his license to practice law in 1764 before turning to a life of science.

In 1771, at the age of 28, Lavoisier married 13-year-old Marie-Anne Pierrette Paulze, the daughter of a co-owner of the Ferme générale. Over time, she proved to be a scientific colleague to her husband, translating English documents for him, creating many sketches and carved engravings of the laboratory instruments used by Lavoisier and his colleagues, as well as editing and publishing Lavoisier’s memoirs later on.

An Analysis of Gypsum

Lavoisier set up a small research laboratory and began his first experiments. At the age of 22 he published his first work, a treatise on gypsum, Analyse du gypse (1765) as the first of a planned series of studies on mineral analysis. Unlike his predecessors, he studied these using wet chemical methods (as observed in nature through the action of water). Gypsum, as found in the Paris pavement, was a neutral salt based on a sulphurous acid and lime, which released water when heated (Rouelle’s water of crystallization).

Among the achievements of Lavoisier was the discovery of the role of oxygen in the rusting of metal, as well as oxygen’s role in animal and plant respiration. Working with Pierre-Simon Laplace,[5]Lavoisier conducted experiments that showed that respiration was essentially a slow combustion of organic material using inhaled oxygen. Lavoisier’s explanation of combustion disproved the phlogiston theory, which postulated that materials released a substance called phlogiston when they burned. Lavoisier’s researches included some of the first truly quantitative chemical experiments. He carefully weighed the reactants and products in a chemical reaction, which was a crucial step in the advancement of chemistry. He showed that, although matter can change its state in a chemical reaction, the total mass of matter is the same at the end as at the beginning of every chemical change. Thus, for instance, if a piece of wood is burned to ashes, the total mass remains unchanged. Furthermore, he determined that the components of water were oxygen and hydrogen, and that air was a mixture of gases, primarily nitrogen and oxygen. 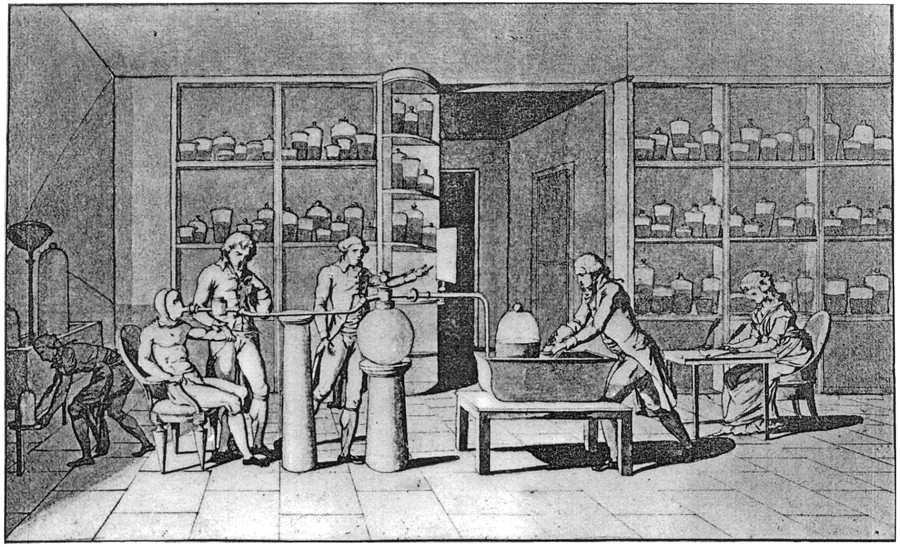 Lavoisier conducting an experiment on respiration in the 1770s

The methodological tripartite representation of chemical experiments, which has been preserved to this day, was also valuable for later natural scientists. He divided the test descriptions into:

Antoine Lavoisier maintained an extensive correspondence with scientists all over Europe and had a large library with the most important scientific journals. He strictly scheduled his time and, in addition to his other obligations to experiment for up to six hours a day, from 6 am to 9 am and 7 pm to 10 pm and one day a week (Saturday) all day which he was particularly looking forward to and excited about. Guests were often present at the experiments and Lavoisier talked to them about the experiments. Among the foreign guests were Benjamin Franklin, Arthur Young, Martinus van Marum and James Watt.[6] He also enjoyed working with other scientists. In particular, his laboratory in the Arsenal was one of the best equipped in Europe, in France only that of Guyton de Morveau was nearly comparable.

Antoine Lavoisier had already been accepted into the select circle of scientists of the French Academy, Académie des sciences, as the youngest full member, at the age of only 25, in 1768. In 1784, Lavoisier was appointed director of the French Academy of Sciences. In this function he also had access to the king, among other things it was his task to introduce the members to the king. 1788 he was elected a Fellow of the Royal Society.

Meanwhile, Lavoisier also had become a very powerful figure in the unpopular Ferme Générale, i.e. 28 feudal tax collectors who were known to profit immensely by exploiting their position. He was branded a traitor under Robespierre, during the Reign of Terror following the French revolution in 1794. Lavoisier was tried, convicted, and guillotined on 8 May in Paris, at the age of 50. His importance to science was expressed by Lagrange who lamented the beheading by saying:[5]

“Cela leur a pris seulement un instant pour lui couper la tête, mais la France pourrait ne pas en produire une autre pareille en un siècle.” (“It took them only an instant to cut off his head, but France may not produce another such head in a century.”)

At yovisto academic video search you can watch a panel discussion about ‘Chemistry on Canvas – A Portrait of the Lavoisier Family’ from the World Science Festival.