You are here: Home › aviation › Gabriel Voisin – From Aviation to Luxury Cars 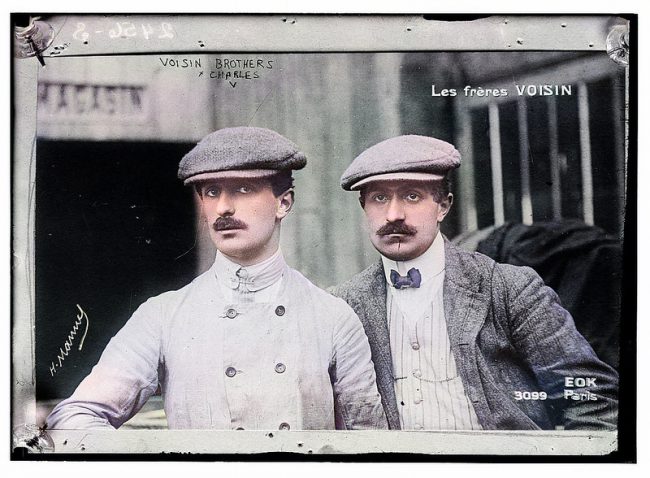 Gabriel (left) and Charles Voisin in 1906

On February 5, 1880. French aircraft and automobile designer Gabriel Voisin was born. Voisin was the creator of Europe’s first manned, engine-powered, heavier-than-air aircraft capable of a sustained (1 km), circular, controlled flight. During World War I the company founded by Voisin became a major producer of military aircraft. Subsequently, he switched to the design and production of luxury automobiles under the name Avions Voisin.

Gabriel Voisin was born at Belleville-sur-Saône, France. The son of a foundry owner, he built a steamboat at a young age with his brother Charles Voisin, who was two years younger. When his father abandoned the family his mother, Amélie, took her sons to Neuville-sur-Saône, where they settled near her father’s factory. Their grandfather, Charles Forestier, took charge of the boys’ education with military rigor. When his grandfather died, Gabriel was sent to school in Lyon and Paris where he learned industrial design, a field in which Voisin claims to have been exceptionally gifted.

At the end of the 1890s, the Voisin brothers became interested in aviation and designed gliders – for a short period in collaboration with the aircraft pioneer Louis Blériot.[2] Gabriel Voisin studied architecture and mechanical engineering in Paris. Out of interest in flying, he attended lectures by Ferdinand Ferber in February 1904, which led to a collaboration with Ferber and Ernest Archdeacon in which he flew a glider. In the spring of 1904, he completed several glides of up to 25 seconds duration.

As early as 1905, Gabriel Voisin founded a company together with Louis Blériot to manufacture aircraft. However, the two fell out after a few months over how to proceed. The split with Blériot led to the founding of his own aircraft factory, Aéroplanes G. Voisin, in 1906, with his brother Charles as pilot and Gabriel as designer. The company was initially engaged in the manufacture of gliders, but they soon became powered.

In 1907, the Voisin Standard type was created with the construction of two machines, one for Henry Kapferer and one for Léon Delagrange. The aircraft built for Delagrange also became known as the Voisin-Delagrange I, as the Voisin brothers placed the owner’s name prominently on the rear of the fuselage. The typical Voisin biplanes were derived from this March 1907 aircraft built for Delagrange. The basic elements of this machine, with its biplane framework, elevator located forward of the cockpit, and pusher propeller drive, were similar to the Wright brothers‘ Flying Machine patent 821393 (applied for 1903, granted 1906 and their successful Wright Flyer III of 1905. The Voisin Standard had a boxy frame of steel and spruce. Engine types often varied, with power ranging from 50 to 60 hp. The machine for Delagrange was flown by Charles Voisin in March and April 1907 at the airfield in the Park de Bagatelle. In January 1908, the company became known in Europe when Henri Farman succeeded in winning the Grand Prix d’Aviation, worth 50,000 francs, for a flight over the closed kilometer with another plane of this model series. In the estimation of the contemporary reference book Jane’s All the World’s Aircraft (1913) by Fred T. Jane, the Voisin was the first European aircraft to have flown truly successfully.

Having learned to fly with a Voisin, on 8 March 1910, Raymonde de Laroche became the first woman to receive a pilot licence when the Aéro-Club de France issued her licence #36.[4] In South Africa, on 28 December 1909, French aviator Albert Kimmerling made the first manned, heavier-than-air powered flight in Africa in a Voisin 1907 biplane. At the Flight Week in Reims in August 1909, 9 of the 29 pilots entered competed on “Voisin”. The other pilots were distributed among 10 other manufacturers. On March 18, 1910, Harry Houdini, who later became an American magician, made the first flight in Australia in a Voisin biplane. The flight took place on Old Calder Hwy in Diggers Rest, Victoria (Australia). In October 1910, Voisin equipped the biplane with a machine gun. He exhibited this aircraft at the Paris Air Show. It is considered the first armed aircraft in the world. Since the Wright Brothers would provide no evidence of their own accomplishments, they were widely disbelieved at the time, so this was a major breakthrough in the conquest of the air, and brought Voisin many orders for similar aircraft. 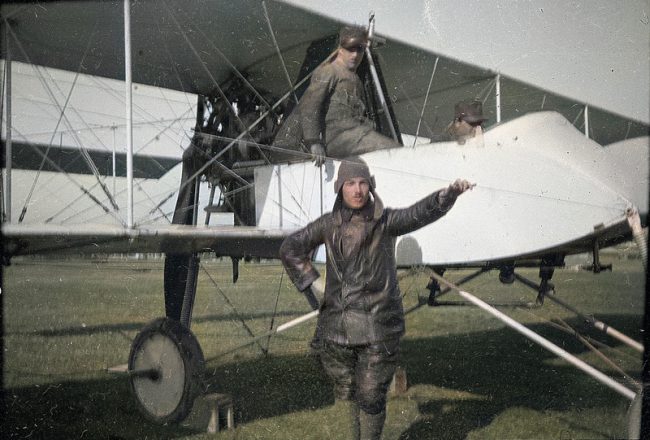 Aéroplanes Voisin was one of the most successful aircraft manufacturers during World War I, so Gabriel Voisin was quite wealthy by the end of the war. The Voisin L had already been designed by Gabriel Voisin in 1912 and was produced in 1914 by his company Aéroplanes G. Voisin in Issy-les-Moulineaux for the French Air Force. Despite its bulky lattice fuselage, the pressurized propeller-driven aircraft with its canvas-covered tubular steel construction proved so weather and combat resistant during the war that it remained as the standard Allied bomber until 1918. Many aircraft were also used as training aircraft until the end of the war in the D-2 dual control version. 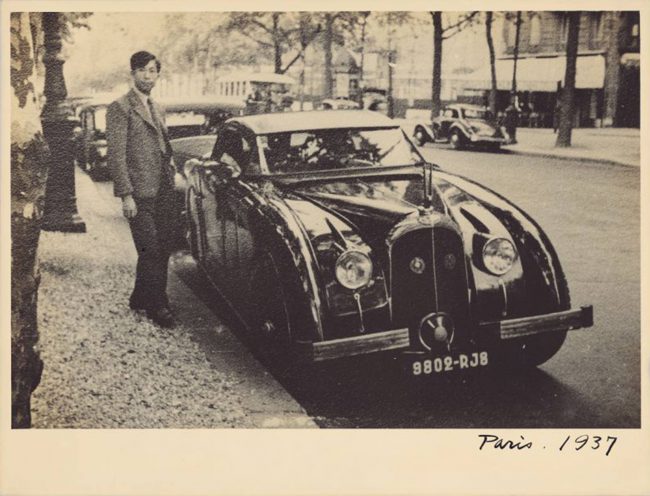 His brother Charles died in a traffic accident in 1912. Thus, Gabriel Voisin turned his back on aircraft manufacturing at this time and collaborated with automobile designer friend André Citroën to build a luxury car in the Voisin company developed by Citroën engineers. In 1919 Voisin started producing cars using Knight-type sleeve valve engines at Issy-les-Moulineaux, an industrial suburb to the southwest of Paris. Former student of the Fine Arts School of Lyon and enthusiast for all things mechanical since his childhood, Voisin’s uncompromisingly individual designs made extensive use of light alloys, especially aluminum. One of the company’s most striking early designs was the Voisin Laboratoire Grand Prix car of 1923; one of the first cars ever to use monocoque chassis construction, and utilizing small radiator-mounted propeller to drive the cooling pump. Since the cars were far inferior to those of the competition in terms of performance, the bodies were designed to be extremely light and aerodynamic using experience gained from aircraft construction. With repeatedly modified “Laboratoires”, the company took part in a wide variety of racing classes, and 50 different long-distance records were set with a specially built vehicle – called the C5.

The characteristic Voisin style of ‘rational’ coachwork he developed in conjunction with his collaborator André Noel. Noel prioritized lightness, central weight distribution, capacious luggage boxes and distinctively angular lines. The 1930s models with underslung chassis were strikingly low. In the early 1930s, Gabriel Voisin could not pay all of his draftsmen any more and a young creative engineer named André Lefèbvre quit, recommended by Gabriel to Louis Renault. Lefèbvre finally entered Citroën where he led three particularly significant car projects: the Traction Avant, the 2CV and the DS, using a lot of Gabriel’s lessons.[5] From 1937, Graham-Paige built-in engines were used. In 1939, automobile production ceased. After the war the business was nationalized in the political turmoil and the Government installed directors who did not continue the original engineering traditions. The Voisin business was integrated into that of its principal creditor, engine supplier Gnome & Rhône which was in turn nationalized in 1945 to form the basis for what now became the state-directed SNECMA business. Voisin presented a “Biscooter Voisin” at the 1950 Paris Motorcycle and Bicycle Show, a voiturette intended for the impoverished age, with a front-mounted 125 cc engine from Gnome & Rhône. The aluminium-bodied vehicle had a three-speed transmission with a secondary gear and did not require a driver’s license

In the 1920s, the company also proposed a ‘Motor-Fly’ which was a bicycle with a small auxiliary 2-stroke engine added to the back wheel, and also produced pre-fabricated houses that could be built in 3 days (‘votre maison en trois jours – your house in 3 days’). These were available with a floor area of 35, 75 or 105 square meters, and were constructed around a metal framework. In 1960 he retired to his country house, “La Cadolle”, at Le Villars near Tournus, where he wrote his memoirs. In 1965, he was made a Commander of the Legion d’Honneur. Gabriel Voisine died on Christmas Day, December 25, 1973 in Ozenay, Saône-et-Loire at the age of 93.