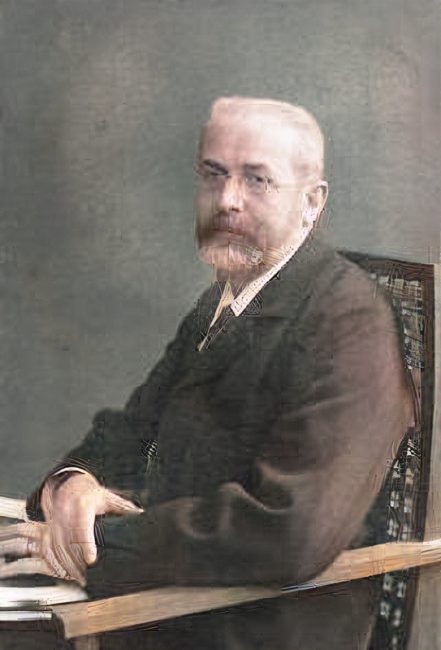 On August 3, 1917, German mathematician Ferdinand Georg Frobenius passed away. Frobenius best known for his contributions to the theory of elliptic functions, differential equations and to group theory. He is known for the famous determinantal identities, known as Frobenius–Stickelberger formulae, governing elliptic functions, and for developing the theory of biquadratic forms. He was also the first to introduce the notion of rational approximations of functions (nowadays known as Padé approximants), and gave the first full proof for the Cayley–Hamilton theorem.

“In mathematics, however, organizing talent plays a most subordinate role. Here weight is carried only by the individual. The slightest idea of a Riemann or a Weierstrass is worth more than all organisational endeavours. To be sure, such endeavours have pushed to take centre stage in recent years, but they are exclusively pursued by people who have nothing, or nothing more, to offer in scientific matters. There is no royal road to mathematics.”
– Ferdinand Georg Frobenius, [1]

Ferdinand Georg Frobenius was born on 26 October 1849 in Charlottenburg, a suburb of Berlin, which by today is part of Berlin and actually rather close to the place where I am currently writing this article. His parents were Christian Ferdinand Frobenius, a Protestant parson, and Christine Elizabeth Friedrich. In 1860, he entered the Joachimsthal Gymnasium and after graduating in 1867, he went to the University of Göttingen, before returning to Berlin after only one semester. At the University of Berlin he attended lectures by Leopold Kronecker, Eduard Kummer and Karl Weierstrass.[4,5,6] Frobenius received his doctorate (awarded with distinction) in 1870 supervised by Weierstrass with a thesis on the solution of differential equations.

With Support of Weierstrass

In 1874, after having taught at secondary school level first at the Joachimsthal Gymnasium then at the Sophienrealschule, he was appointed to the University of Berlin as an extraordinary professor of mathematics. Interestingly, Frobenius received a teaching position without completing a habilitation. Though today this is nothing extraordinary in Germany, by the time of Frobenius the German university system was much more formal and restrictive. It must have been made possible due to strong support by Weierstrass who was extremely influential and considered Frobenius one of his most gifted students.[1]

Frobenius was only in Berlin a year before he went to Zürich to take up an appointment as an ordinary professor at the Eidgenössische Polytechnikum, where he worked from 1875 to 1892. Influenced by Weierstrass, Frobenius was appointed to the vacant chair of Leopold Kronecker at University of Berlin in 1893, where he was elected to the Prussian Academy of Sciences. To justify his election, Weierstrass and Fuchs had listed 15 topics on which Frobenius already had made major contributions: the development of analytic functions in series, the algebraic solution of equations whose coefficients are rational functions of one variable, the theory of linear differential equations, Pfaff’s problem, linear forms with integer coefficients, linear substitutions and bilinear forms, adjoint linear differential operators, the theory of elliptic and Jacobi functions, the relations among the 28 double tangents to a plane of degree 4, Sylow’s theorem, double cosets arising from two finite groups, Jacobi’s covariants, Jacobi functions in three variables, the theory of biquadratic forms, and the theory of surfaces with a differential parameter.

In 1878 Frobenius proved Cayley-Hamilton ‘s theorem for matrices of any dimension. In 1877 he proved Frobenius’s theorem that there are only three associative finite-dimensional divisional algebras above the real numbers, the real numbers themselves, the complex numbers, and the quaternions.

As the major mathematics figure at Berlin, Frobenius continued the university’s antipathy to applied mathematics, which he thought belonged in technical schools. In some respects, this attitude contributed to the relative decline of Berlin in favour of Göttingen, which was less conservative in its views. On the other hand, he and his students made major contributions to the development of the modern concept of an abstract group — such emphasis on abstract mathematical structure became a central theme of mathematics during the 20th century.[2] Group theory was one of Frobenius’ principal interests in the second half of his career. One of his first contributions was the proof of the Sylow theorems for abstract groups. Earlier proofs had been for permutation groups. His proof of the first Sylow theorem (on the existence of Sylow groups) is one of those frequently used today. Frobenius completely determined the characters of symmetric groups in 1900 and of characters of alternating groups in 1901, publishing definitive papers on each. He continued his applications of character theory in papers of 1900 and 1901 which studied the structure of Frobenius groups.[3]

Among the topics which Frobenius studied towards the end of his career were positive and non-negative matrices. He introduced the concept of irreducibility for matrices and the papers which he wrote containing this theory around 1910 remain today the fundamental results in the discipline. With Frobenius’s disdain for applied mathematics, it is somewhat ironic that his fundamental work in the theory of finite groups was later found to have surprising and important applications in quantum mechanics and theoretical physics.[2] Ferdinand Georg Frobenius died on  26. Oktober 1849 at age 67.