You are here: Home › chemistry › Leopold Gmelin and the Chemistry of Digestion 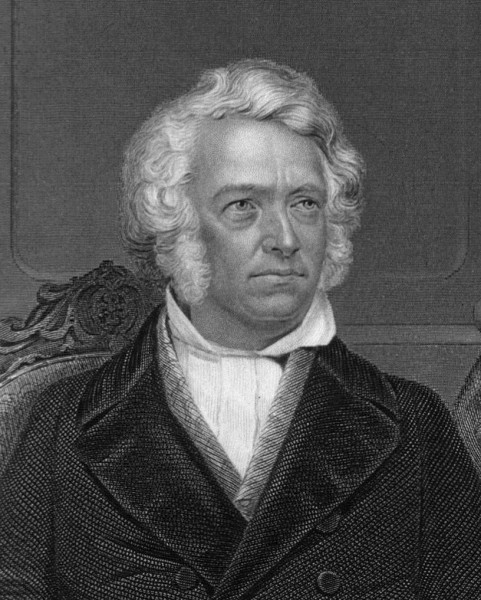 On August 2, 1788, German chemist Leopold Gmelin was born. Gmelin discovered potassium ferrocyanide (1822), devised Gmelin‘s test for bile pigments and researched the chemistry of digestion. He published the notable Handbook of Chemistry to comprehensively survey the subject. This was the first thorough update since the era of Lavoisier‘s influence.[4] He also coined the names ester, ketone and racemic acid.

Gmelin was born in Göttingen, Germany, the son of the physician, botanist and chemist Johann Friedrich Gmelin and his wife Rosine Schott. Due to his family he early came in contact with medicine and the natural sciences. From 1799 to 1804 he attended the Lyceum at Göttingen, and in the summer of 1804 the chemical lectures of his father. In the same year Gmelin moved to Tübingen to work in the family pharmacy, and he also studied at the University of Tübingen among other relatives like Carl Friedrich Kielmeyer, who supported Gmelin to move to the University of Göttingen in 1805, where he successfully passed his exams in 1809.

Back in Tübingen, Gmelin due to an insult challenged another medical student Gutike for a forbidden duel. Though nobody was injured, he had to flee to Vienna to avoid jurisdiction. At the University of Vienna, his research was focussed on black pigment of oxen and calves eyes, whose coloring principle he tried to fathom. Despite the simplest chemical means he could describe the properties of the pigment and recognized the carbon rightly as the cause of staining. In 1812 he received his doctorate from Göttingen in absentia with his dissertation on “On the Black Pigment of the Eye“.[2] Following an extensive study trip through Italy, he was appointed associate professor in Heidelberg in 1814 after finishing his Habillitationschrift, “On Hauyne and minerals related to it, together with geognostic observations on the mountains of ancient Latium“. Next, he went on another educational trip to Paris to study at the Sorbonne, where he made the acquaintance of René Just Haüy, Joseph Louis Gay-Lussac,[5] Louis Jacques Thénard and Louis Nicolas Vauquelin.

In 1817, he became full Professor of Chemistry at the Heidelberg University. There, a close cooperation with Friedrich Tiedemann evolved and in 1826 they published “The digestion after tests” (Die Verdaunng nach Versuchen) and established the basis of the physiological chemistry. The work, which also described many new working techniques, contained groundbreaking insights into the gastric juice, in which they found hydrochloric acid, and bile, in which Gmelin and Tiedemann among others discovered the lipid molecule cholesterol and taurine. Taurine actually accounts for up to 0.1% of total human body weight. It has many fundamental biological roles, such as conjugation of bile acids, antioxidation, osmoregulation, membrane stabilization, and modulation of calcium signaling. It is essential for cardiovascular function, and development and function of skeletal muscle, the retina, and the central nervous system.[1] Taurine is named after the Latin taurus which means bull or ox, as it was first isolated from ox bile.

Introduced by Gmelin, Gmelin’s test enabled the detection of bile constituents in the urine of people suffering from jaundice. Furthermore Gmelin and Tiedemann delivered a new, more refined view of the absorption of nutrients through the gastrointestinal tract; they were the founders of modern physiology.

In the field of digestive chemistry Gmelin later discovered more components of bile and introduced Gmelin’s test. When Friedrich Wöhler worked on complex cyanogen compounds in 1822, Gmelin assisted him and discovered the Red prussiate. In 1817 also the first volume of Gmelins Handbook of Chemistry was published, which grew up to 9 volumes in the fourth edition of 1843. In this edition Gmelin included the Atomtheory and devoted much more space to the increasingly important organic chemistry. The terms Ester and Ketone were introduced by Gmelin for two classes of organic compounds. An ester being a chemical compound derived from an acid (organic or inorganic) in which at least one –OH (hydroxyl) group is replaced by an –O–alkyl (alkoxy) group. Ketones are organic compounds with the structure RC(=O)R’, where R and R’ can be a variety of carbon-containing substituents. Examples include many sugars (ketoses) and the industrial solvent acetone, which is the smallest ketone. Gmelin also established the basis for the Gmelin system, which later was named after him, for unambiguous classification of inorganic substances.

At the age of 60 Gmelin suffered a first stroke, another in August 1850. In the two following years he suffered increasingly from the effects of a brain illness, at nearly 65 years Leopold Gmelin died on 13 April 1853 in Heidelberg. Gmelin’s Handbook of theoretical chemistry was continued as the Gmelin Handbook of Inorganic Chemistry until 1997 in about 800 volumes by the Gmelin Institute, and it is continued by the Gesellschaft Deutscher Chemiker as a database.