You are here: Home › explorer › Juan Sebastián Elcano and the First Circumnavigation of the Earth

On August 4, 1526, Spanish explorer of Basque origin Juan Sebastián Elcano passed away. Elcano was part of the Spanish expedition commanded by the Portuguese explorer Ferdinand Magellan, who set sail for the first successful circumnavigation of the Earth. After Magellan‘s death in the Philippines, Elcano took command of the nau Victoria from the Moluccas to Sanlúcar de Barrameda in Spain.

Juan Sebastián Elcano was born among four brothers in 1476 at Guetaria, Vizcaya, Castile (today Spain), to Domingo Sebastián Elcano and Catalina del Puerto [1]. He fought in the Italian Wars under the command of Gonzalo Fernández de Córdoba in Italy, and in 1509 he joined the Spanish expedition organized by Cardinal Francisco Jiménez de Cisneros against Algiers. Elcano settled in Seville and became a merchant ship captain. After breaking Spanish laws by surrendering a ship to Genoan bankers in repayment of a debt, he sought a pardon from the Spanish king Charles I, by signing on as a subordinate officer for an expedition to the East Indies in the search for a new route to the Spice Islands (now known as the Maluku Islands in present-day Indonesia), led by Portuguese navigator Ferdinand Magellan.[2,3]

Magellan believed that the globe was smaller than it actually is, and that a shortcut to the Spice East-Indian Islands was possible by going West through the New World. Elcano served as a naval commander of Charles I of Spain and took part in the expedition. They set sail with five ships, the Concepción, San Antonio, Santiago, Trinidad and Victoria with 241 men from Spain in 1519 and made its way to Brazil, avoiding Portuguese settlements due to hostilities between the Spanish and Portuguese.[2]

Elcano participated in a fierce mutiny against Magellan before the convoy discovered the passage through South America, the Strait of Magellan. Magellan had decided to call a halt in the sheltered bay of San Julián, as he feared continuing in bad weather. Left idle, the men began talk of mutinying and heading back to Spain. When Magellan put down the mutiny by force, Elcano was pardoned by Magellan and after five months of hard labour in chains was made captain of the galleon Concepción. This decision probably was driven by the fact that the other experienced ships captains were executed or marooned after the mutiny or had gone back to Spain with the San Antonio.

Discovering the Passage to the Pacific

In October/November 1520 the expedition discovered a passage now known as the Strait of Magellan located in the southern tip of South America and sailed through the strait. On 28 November 1520, three ships set sail for the Pacific Ocean and the Spice Islands, which should according to Magellan’s calculations only be a few days or weeks ahead. But he was terribly mistaken. The ships took four months to cross the South Pacific and about 19 men died before they reached Guam on 6 March 1521. Conflicts with the nearby island of Rota prevented Magellan and Elcano from resupplying their ships with food and water. They eventually gathered enough supplies and continued their journey to the Philippines, the eastern edge of the world known to Europe.

On 27 April 1521, Magellan was killed and the Spaniards defeated in the Battle of Mactan in the Philippines. The surviving members of the expedition could not decide who should succeed Magellan. The men finally voted on a joint command with the leadership divided between Duarte Barbosa and João Serrão. Within four days these two were also killed. João Lopes de Carvalho took command of the fleet and led it on a meandering journey through the Philippine archipelago with Elcano being second in command.

During this six-month listless journey after Magellan died, and before reaching the Moluccas, Elcano’s stature grew as the men became disillusioned with the weak leadership of Carvalho. The two ships, Victoria and Trinidad finally reached their destination, the Moluccas, on 6 November 1521. On the island of Tidore, where, aided by Almanzor, sultan of Tidore, they founded a commercial center, loading clove, nutmeg, and other precious goods.[4] They rested and re-supplied in this haven, and filled their holds with the precious cargo of cloves and spice. On 18 December, the ships were ready to leave. 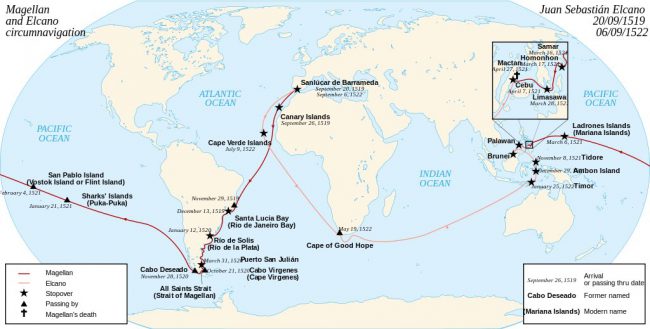 The Victoria, commanded by Elcano along with 17 other European survivors of the 240 man expedition and 4 (survivors out of 13) Timorese Asians continued its westward voyage to Spain crossing the Indian and Atlantic Ocean. They eventually reached Sanlúcar de Barrameda on 6 September 1522, despite scurvy, starvation, and harassment by the Portuguese. The King of Spain received Elcano and granted him a coat of arms bearing a globe and the Latin phrase Primus circumdedisti me, or “You Went Around Me First.”

The Bitter End of Another Expedition

In 1525, Elcano went back to sea, and became chief navigator of the Loaísa expedition led by Spanish nobleman García Jofre de Loaísa to claim the Molucca Islands for King Charles I of Spain. The expedition was a fiasco. Both Elcano and Loaísa and many other sailors died of malnutrition in the Pacific Ocean, but the survivors reached their destination and a few of them managed to return to Spain.