You are here: Home › engineering › Ètienne Lenoir and the Internal Combustion Engine 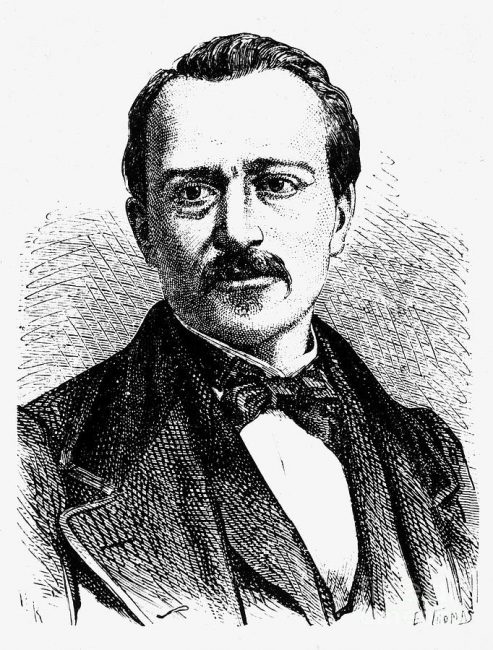 Étienne Lenoir was born as the third of eight children in the 800-strong community of Mussy-la-Ville near Virton, Belgium, the son of Jean-Louis Lenoir, a “merchant”, and Margot Magdelaine, his wife. He seems to have chosen a technical profession at an early age, but his family could not afford a corresponding education. He left his homeland in 1838 apparently without regret. It is said that he threw away his shoes at the end of the village, because he did not want to take a crumb of earth with him from a country that did not understand what he wanted. On foot he walked via Reims and Meaux to Paris, where he arrived in the summer of 1838. During this time he earned his living by doing casual work on farms.

He found a job as a waiter in the Auberge de l’Aigle d’Or in the rue du Temple in the 3rd arrondissement, where he also lived. In his free time he read and experimented in the cellar of the hostel. An enameller in the quarter hired him as a worker. Lenoir now dealt with the problem of producing white enamel by oxidation. He found a formula and received his first patent for it in 1847. Lenoir was also interested in electrolysis and developed a special process for silvering or copper-plating small round objects. The goldsmith Charles Christofle bought it from him and recommended that he patent it. This happened in 1851. Christofle applied the process to the ornamental design of the Paris Opera.

Examining the “Automobile” of Cugnot

Lenoir had no success with the development of an electromagnetic motor, but between 1855 and 1857 several patents for completely different technical solutions followed: in the railway sector he worked on electrical signals and safety systems such as brakes, he developed a controller for dynamos, invented a mechanical kneading machine, a water meter and a process for coating glass surfaces. Lenoir could meanwhile live from selling his inventions. One of his major influences of the time was the French inventor Nicolas-Joseph Cugnot.[4] He was known to have built the first working self-propelled mechanical vehicle and may have been the first to build a steam-powered vehicle, which is highly disputed at this time. However, one of his inventions was exhibited at the École Centrale Paris and Lenoir started thinking of improving the construction. He noticed that this machine had numerous weaknesses including its weight, its brakes, and its furnace. 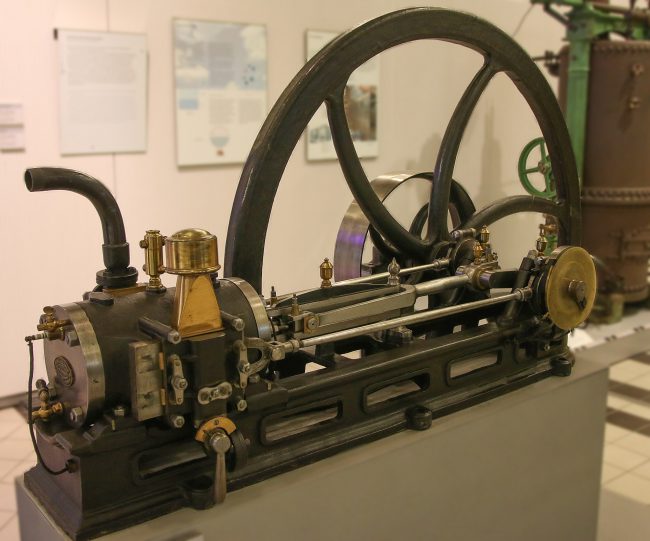 The Steam Engine’s Day were counted…

Lenoir was convinced that the potential of the steam engine was largely exhausted. In addition, the disadvantages were obvious: the engine has to be heated for a long time before work can be done, and it is heavy. Lenoir used the new financial independence to build his own engine. He attended free lectures at the École Centrale and after a few months he began to implement it in the mechanical workshop of his friend Hippolyte Auguste Marinoni (1823-1904) in the Rue de la Roquette in the 11th arrondissement. Marinoni, son of a police officer and inventor of a machine for processing rice and cotton, earned a fortune with his rotary printing press.

The breakthrough came in 1858 with a stationary engine. Lenoir further developed the single-cylinder engine into the first usable gas engine in 1859. One of its advantages was that it could be powered directly in the home: the engine only had to be connected to the municipal gas supply. It also ran very quietly; consumption, on the other hand, was high. The construction is a combination of already known elements with own inventiveness and has some similarities with the steam engine. Instead of burning the fuel outside, as in the steam engine, and then conducting the heat into the cylinder, in the gas engine it is generated by combustion inside. In contrast to the flying piston engine of Nikolaus Otto and Eugen Langen,[5] the drive of the Lenoir engine acts directly on the crankshaft. Lenoir’s engine works as a two-stroke engine without compression; a brochure of the Musée des Arts et Métiers calls it a “one-stroke engine with two half-strokes”, with intake and combustion forming the first and exhaust the second half-stroke.

An ignition mixture of illuminating gas and air drives the piston, which is based on a patent of Robert Street, and this in turn drives the flywheel. It is directed alternately to each side of the piston by a flat slide valve, so that the piston works in both directions (double-acting), similar to the gas engine by Philippe Lebon (1767-1804). The movement of the piston simultaneously ejects the gas burned in the previous stroke on the other side. The slide is driven by the crankshaft via an eccentric. The ignition system conceived by Lenoir, called inflammateur by him, consists of two of the galvanic elements developed by Robert Wilhelm Bunsen,[6] which transmit low voltage to a Rühmkorff induction apparatus (induction coil). The spark plug developed by Lenoir is based on a principle discovered by Isaac de Rivaz (1752-1828). It consists of a sheathed copper pin containing a porcelain pin with the ignition wire. Lenoir also designed the ignition distributor for it itself. In November 1859 Lenoir applied for a patent for the engine. About 20 people were invited to the signing ceremony of the document on January 23, 1860 with demonstration

The Lenoir engine had some basic disadvantages: Physically, the maximum efficiency of atmospheric motors is generally low; concrete figures speak of 3 to 5 percent. A modern car with a gasoline engine reaches 30 percent. As a result, the engine also consumed a lot of fuel. Since the piston was exposed to explosions on both sides, very high operating temperatures developed. With the materials of the time and the possible manufacturing precision, there was soon the danger of a piston jamming. Accordingly, the engine required a lot of lubricating oil and a very powerful water cooling system. Some engines were initially produced by Marinoni. Lenoir was already looking for investors in 1859. With the investor Gautier, the Société des Moteurs Lenoir was founded. The first series machine with an output of 4 hp according to the calculation method of the time was delivered in May 1860, with great advertising appeal. In the following months 380 engines with 1 to 4 hp left the factory. By 1864 130 Lenoir engines were running in Paris alone. The engine was very well received. At the 1862 World Fair in London it received an award. 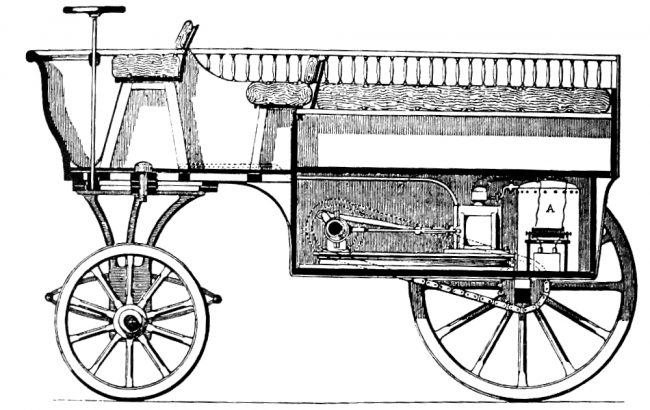 In 1861, Lenoir put a 2 HP engine into a boat on a trial basis. Since gas could not yet be carried, he had to find another fuel supply. Instead of coal gas he used kerosene. A version of the engine with 1½ HP, which also worked independently of the stationary gas supply, he installed in 1863 in a three-wheeled car called a hippomobile. Here he used a turpentine-based fuel. The body consisted of a raised cuboid body. Underneath it there was a wooden compartment with the drive technology. With this vehicle he drove the 18 km long distance from his workshop to Joinville-le-Pont and back in about three hours. This resulted in an average of 6 km/h including breaks. The information about the journey was provided by Lenoir himself, but is considered to be reliable. Files kept by the Automobile Club de France document the ride as well as a patent from 1864. [4] The car was not a success because of its heavy weight and the engine that rotated at only 100 rpm] The car was not a success because of the high weight and the fact that it was only a 100 rpm engine. The car was not a success because of the high speed.

Lenoir spent the rest of his life in peaceful prosperity in his apartment in Paris. From here he often went fly-fishing on the nearby Seine, but remained active and followed the further development of the combustion engine with interest. Jean-Joseph Étienne Lenoir quietly passed away on August 4, 1900.