You are here: Home › chemistry › Ilya Prigogine and the Irreversibility of Time 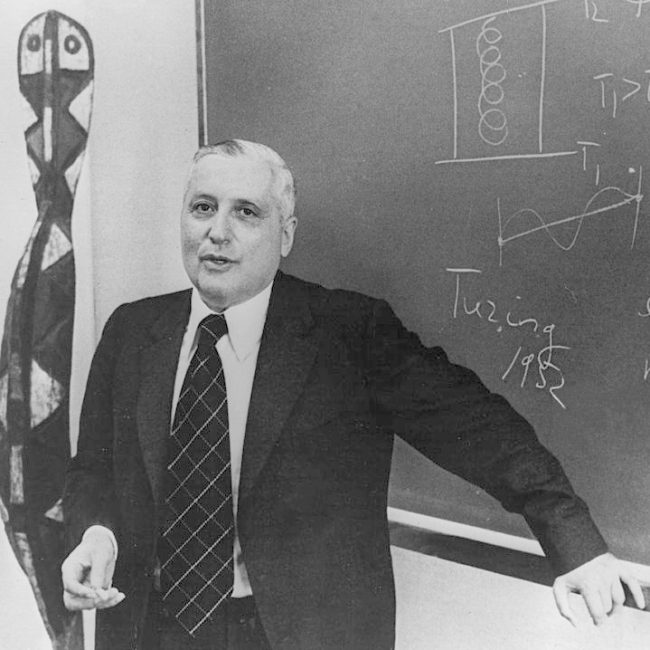 On January 25, 1917, Belgian physical chemist and Nobel Laureate Ilya Prigogine was born. He is noted for his work on dissipative structures, complex systems, and irreversibility. The main theme of Prigogine‘s work was the search for a better understanding of the role of time in the physical sciences and in biology. He attempted to reconcile a tendency in nature for disorder to increase with so-called “self-organisation“.

Prigogine was born in Moscow a few months before the Russian Revolution of 1917, into a Jewish family to Roman (Ruvim Abramovich) Prigogine, a chemical engineer at the Imperial Moscow Technical School, and Yulia Vikhman, a pianist. Because the family was critical of the new Soviet system, they left Russia in 1921. They first went to Germany and in 1929, to Belgium, where Prigogine attended secondary school and university, and finally received Belgian nationality in 1949. When he left the classical (Greco-Latin) section of Ixelles Athenaeum, his interest was more focused on history and archaeology, not to mention music, especially piano.[1] Nevertheless, Prigogine decided to study chemistry at the Université Libre de Bruxelles, where he received his Ph.D. in 1941 and in 1950, became professor.

In 1959, he was appointed director of the International Solvay Institute in Brussels, Belgium. In that year, he also started teaching at the University of Texas at Austin in the United States, where he later was appointed Regental Professor and Ashbel Smith Professor of Physics and Chemical Engineering. In 1947, Prigogine was appointed professor at the Universite’ Libre, and in 1962, he was named director of the Solvay Instituts Internationaux de Physique et de Chimie, a position he held until the end of his life. From 1961 until 1966 he was affiliated with the Enrico Fermi Institute at the University of Chicago. In Austin, in 1967, he co-founded the Center for Thermodynamics and Statistical Mechanics, now the Center for Complex Quantum Systems. The same year, he also returned to Belgium, where he became director of the Center for Statistical Mechanics and Thermodynamics. In an interview [8] he explained his career path in the following way:  since he wanted to understand how one comes to have to flee one’s own country, he first studied politics but was forced to study law. Wanting to understand the behavior of an accused, he studied psychology. To understand psychology and the science of behavior clearly, he stumbled upon the functioning of the human brain. Thus, he studied biology, chemistry and finally biochemistry. Going further to understand chemical interactions, he studied particle physics. From physics, he moved on to astrophysics and cosmology. He then tackled the fundamental questions: matter, the vacuum, time and its unique direction (the arrow of time). To understand the arrow of time, he finally had to study dissipative structures.

Prigogine is best known for his definition of dissipative structures and their role in thermodynamic systems far from equilibrium. A dissipative system is a thermodynamically open system which is operating out of, and often far from, thermodynamic equilibrium in an environment with which it exchanges energy and matter. A dissipative structure is a dissipative system that has a dynamical régime that is in some sense in a reproducible steady state. This reproducible steady state may be reached by natural evolution of the system, by artifice, or by a combination of these two. A dissipative structure is characterized by the spontaneous appearance of symmetry breaking (anisotropy) and the formation of complex, sometimes chaotic, structures where interacting particles exhibit long range correlations. Prigogine actually coined that term for his main research subject, for which he was awarded the Nobel Prize in Chemistry in 1977.

The dissipative structures considered by Prigogine have dynamical régimes that can be regarded as thermodynamically steady states, and sometimes at least can be described by suitable extremal principles in non-equilibrium thermodynamics. Examples in everyday life include convection, turbulent flow, cyclones, hurricanes and living organisms. Less common examples include lasers, Bénard cells, and the Belousov–Zhabotinsky reaction. Dissipative structure theory led to pioneering research in self-organizing systems, as well as philosophical inquiries into the formation of complexity on biological entities and the quest for a creative and irreversible role of time in the natural sciences. The second law of thermodynamics states that in any isolated physical system, order inevitably dissolves into decay. But, Prigogine showed that in a system powered by an energy source – the Earth exposed to the light and heat from the Sun, for example — structures can evolve and become more complex.[5]

The Irreversibility of Time

“Whatever we call reality, it is revealed to us only through the active construction in which we participate.”
– Ilya Prigogine, Order Out of Chaos: Man’s New Dialogue with Nature (1984)

Prigogine viewed the arrow of time and irreversibility as playing a constructive role in nature.[3] The Arrow of Time is a concept developed in 1927 by the British astronomer Arthur Eddington involving the “one-way direction” or “asymmetry” of time.[6] This direction, according to Eddington, can be determined by studying the organization of atoms, molecules, and bodies, might be drawn upon a four-dimensional relativistic map of the world. Physical processes at the microscopic level are believed to be either entirely or mostly time-symmetric: if the direction of time were to reverse, the theoretical statements that describe them would remain true. Yet at the macroscopic level it often appears that this is not the case: there is an obvious direction (or flow) of time. All phenomena that behave differently in one time direction can ultimately be linked to the Second Law of Thermodynamics, which describes irreversibility in thermodynamic processes that actually occur.

Prigogine asserted that Newtonian physics has now been “extended” three times: first with the introduction of spacetime in general relativity, then with the use of the wave function in quantum mechanics, and finally with the recognition of indeterminism in the study of unstable systems (chaos theory). He was a member of numerous scientific organizations, and received numerous awards, prizes and 53 honorary degrees. He was an author on 20 books and nearly 1,000 research articles.[4] In 1955, Ilya Prigogine was awarded the Francqui Prize for Exact Sciences. For his study in irreversible thermodynamics, he received the Rumford Medal in 1976. In addition, Prigogine was awarded the title of viscount by the king of Belgium in 1989. Ilya Prigogine died in 2003 at age 86.