You are here: Home › economics › Oskar Morgenstern and the Game Theory 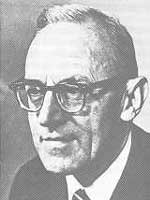 On January 24, 1902, German-American economist and mathematician Carl Friedrich Alfred Oskar Morgenstern was born. Morgenstern popularized “game theory” which mathematically analyzes behaviour of man or animals in terms of strategies to maximize gains and minimize losses. He coauthored Theory of Games and Economic Behavior (1944), with John von Neumann, which extended Neumann‘s 1928 theory of games of strategy to competitive business situations.[4]

“As far as the use of mathematics in economics is concerned, there is an abundance of formulas where such are not needed. They are frequently introduced, one fears, in order to show off. The more difficult the mathematical theorem, the more esoteric the name of the mathematician quoted, the better.”
— Oskar Morgenstern, from Limits of the Use of Mathematics in Economics

Oskar Morgenstern was born in Görlitz, Silesia, Germany, the son of the merchant Wilhelm Morgenstern and Margarete Teichler. His mother was said to be an illegitimate daughter of Emperor Frederick III of Germany. In 1914, Morgenstern’s parents moved to Vienna, Austria, where he received the Austrian citizenship in 1925. The same year he graduated from the University of Vienna, where he was a student of the economist Ludwig von Mises and received his PhD in political science. From 1925 until 1928 he went on a three year fellowship financed by the Rockefeller Foundation, at the end of which he published Economic Forecasting (1928). After his return in 1928 he became a professor in economics at his alma mater the University of Vienna until his visit to Princeton University in 1938. At Vienna, he published his Frontiers of Economic Policy in 1934. He succeeded Friedrich August von Hayek as Director of the Austrian Institute for Business Cycle Research and was Professor in Vienna from 1935 to 1938.

In 1935 Oskar Morgenstern published the article Perfect Foresight and Economic Equilibrium, after which his colleague, Eduard Čech, pointed him to an article of John von Neumann, Zur Theorie der Gesellschaftsspiele (1928). During Morgenstern‘s visit to Princeton University in 1938, Austria was incorporated into Nazi Germany and Morgenstern decided to remain in the United States. He would even remain in the country for the rest of his life, becoming a naturalized citizen in 1944. Morgenstern soon received a promotion to full professor at Princeton but gravitated toward the Institute for Advanced Study. There, he met the John von Neumann again and they collaborated to write their famous Theory of Games and Economic Behavior, published in 1944, which is recognized as the first book on game theory.[4] Game Theory is a mathematical framework for the study of strategic structures which govern rational decision-making in certain economic, political and military situations. This book applied John von Neumann‘s theory of games of strategy to competitive business situations. It is controversial what part von Neumann actually played in the work. It is now assumed that John von Neumann is responsible for most of the scientific representation.

The Theory of Games and Economic Behaviour

“All economic decisions, whether private or business, as well as those involving economic policy, have the characteristic that quantitative and non-quantitative information must be combined into one act of decision. It would be desirable to understand how these two classes of information can best be combined.”
– attributed to Oscar Morgenstern in [14]

The collaboration between economist Morgenstern and mathematician von Neumann led to the birth of entirely new areas investigation in both mathematics and economics. These have attracted widespread academic and practical interest since that time. Morgenstern wrote many other articles and books, including On the Accuracy of Economic Observations (1950), and Predictability of Stock Market Prices (1970) with subsequent Nobel laureate Clive Granger. In 1963 Morgenstern, together with Paul F. Lazarsfeld, founded the Institute for Advanced Studies (IHS) in Vienna, which he headed for a year starting in September 1965. Later he returned to the USA. In 1976 he was accepted into the American Academy of Arts and Sciences. After retiring from Princeton in 1970, Morgenstern accepted a professorship in economics at New York University, where he would remain until his death in 1977.