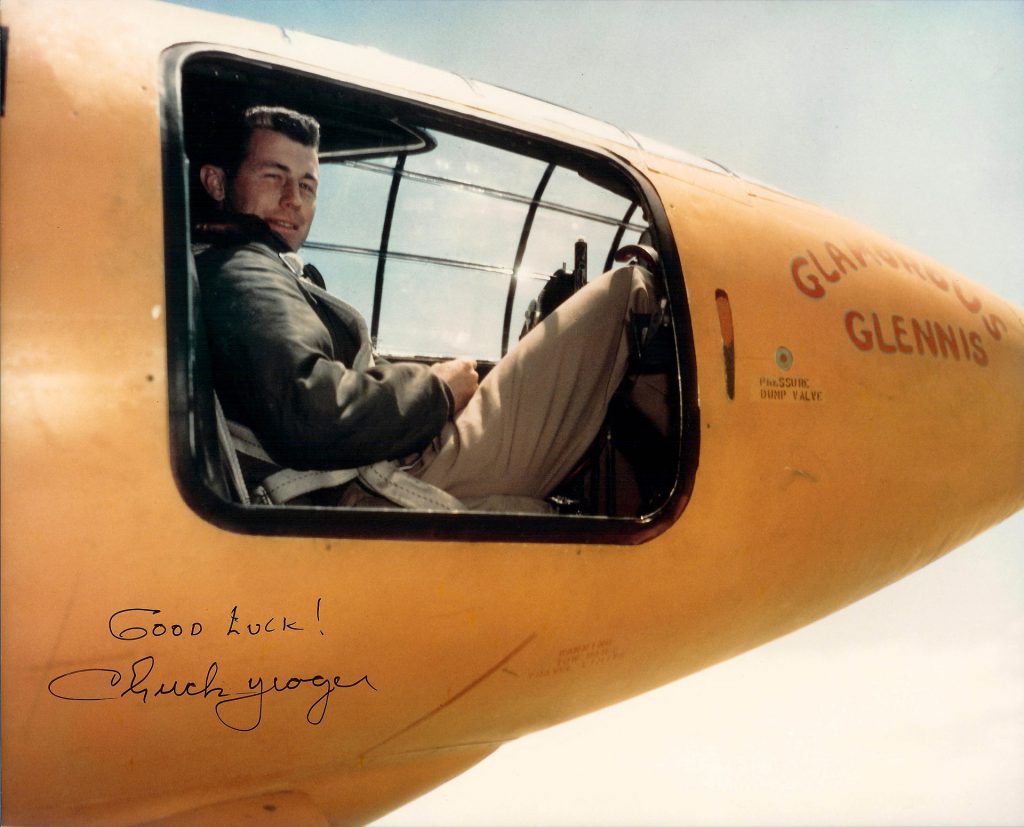 On October 14, 1947, US American test pilot Charles “Chuck” Yeager was the first to officially break the sound barrier with a rocket powered test aircraft Bell X-1, reaching a supersonic speed peak of Mach 1.06.

Charles Yeager was born in Myra, West Virginia, USA, in 1923 and grew up as a curious child, hunting, fishing and hiking. Even though his overall achievements at school were only average, he excelled in everything that contained mathematics and physics. In early years, Yeager started taking apart motor engines and reassembling them. The high school student Yeager graduated just before the United Stated entered World War II. He enlisted in the Army Corps in 1941 and was soon selected for pilot training. Yeager became part of the 363rd Fighter Squadron and continued his trainings in which he excelled and earned himself a great reputation. Next to flying, Yeager was trained as an aircraft mechanic and he understood the machinery very well, which was crucial for his further career. Next to his technical abilities, Yeager was respected for his outstanding eyesight, his physical skills and his abilities to stay very calm in stressful situations.

When the war started, Yeager was equipped with probably the best all-around fighter plane, the P-51 Mustang. He was shot down in 1944 after a combat with German fighters. He landed right in the area of German troops but was rescued by the French. Yeager resumed combat and was soon given a P-51D model in which he achieved the majority of his aerial victories. 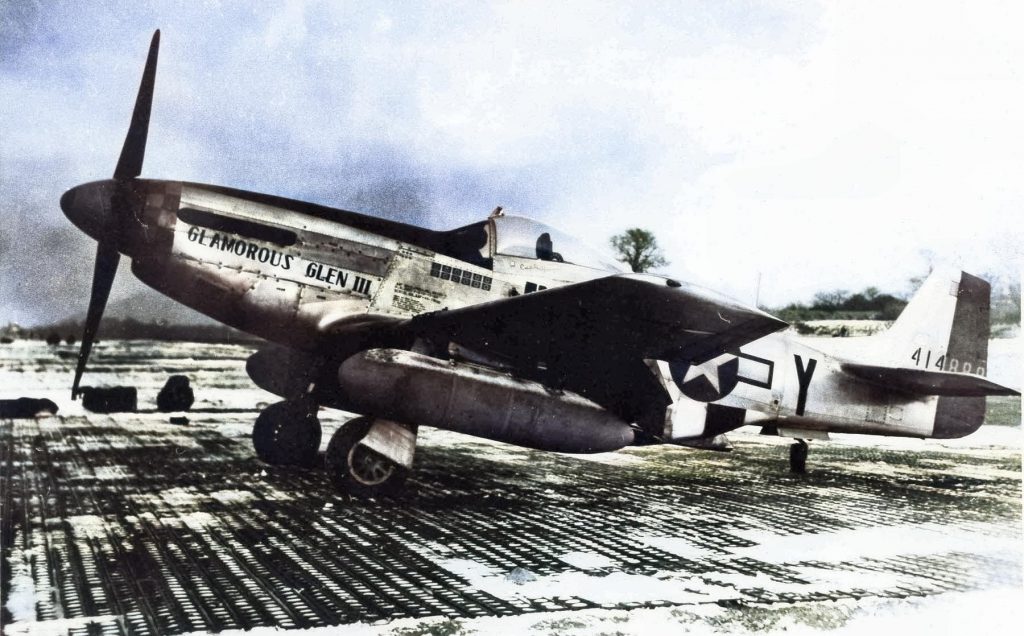 P-51D-20NA, Glamorous Glen III, is the aircraft in which Yeager achieved most of his aerial victories.

After the war, Yeager was assigned to a flight test division in Wright Field where he got to fly about any kind of fighter the U.S. Army had back in the day. He improved his skills to much that he started flying air shows and got to test America’s first operational jet fighter, the P-80A Shooting Star. Yeager entered a test pilot flying school and managed it well despite having just a high school education. Colonel Boyd, head of the Aeronautical Systems Flight Test Division, who noticed Yeager’s talents picked him to be the first pilot to exceed the speed of sound.

On October 12, 1947, some test flights were already performed with the X-1 and Yeager achieved a maximum speed of 0.98 Mach, certainly not enough. He went out to dinner with his wife and went on a small horse ride. Unfortunately, he hit a closed gate on his way back, fell over his horse, and broke two ribs. Knowing that he wouldn’t get the permission to fly the X-1 with broken ribs, Yeager kept this accident for himself. On October 14, 1947 he finally did it, despite the broken bones. Yeager and the X-1 aircraft reached a maximum speed of Mach 1.06 and the first sonic boom ever produced by humans could be heard. The pilot was soon called the ‘fastest man alive’. 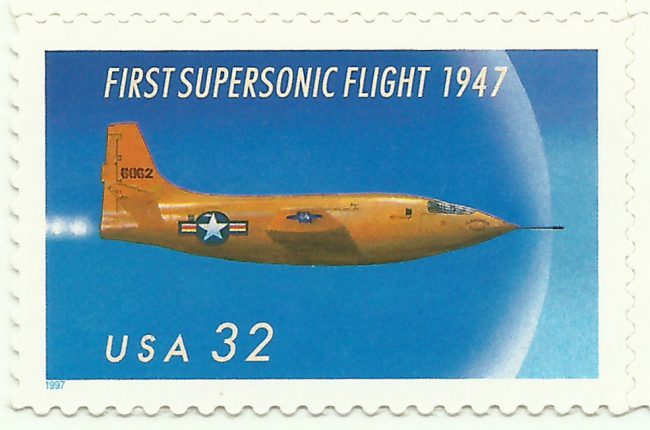 A 1997 United States Postal Service stamp commemorates Bell X-1, the first plane to fly faster than the speed of sound

The Design of the Bell X-1

The Bell X-1 was first discussed in December 1944. Early specifications for the aircraft were for a piloted supersonic vehicle that could fly at 800 miles per hour (1,300 km/h) at 35,000 feet (11,000 m) for two to five minutes. In 1945, the U.S. Army Air Forces Flight Test Division and the National Advisory Committee for Aeronautics (NACA) contracted with the Bell Aircraft Company to build three XS-1 (for “Experimental, Supersonic”, later X-1) aircraft to obtain flight data on conditions in the transonic speed range.  The aircraft’s designers built a rocket plane after considering alternatives. Turbojets could not achieve the required performance at high altitude. An aircraft with both turbojet and rocket engines would be too large and complex.[7] The X-1 was, in principle, a “bullet with wings”. The shape was followed to the extent of seating its pilot behind a sloped, framed window inside a confined cockpit in the nose, with no ejection seat. Swept wings were not used because too little was known about them. As the design might lead to a fighter the XS-1 was intended to take off from the ground, but the end of the war made the B-29 Superfortress available to carry it into the air.

Chuck Yeager’s career continued and he broke many altitude and speed records in the following years. Soon, he joined the NASA and was furtherly assigned command of several fighter teams of the U.S. Army. On October 14, 2012 (at the age of 89) Chuck Yaeaer flew the F-15 Eagle and broke the sound barrier again. On the same day, the Austrian Felix Baumgartner became the first person to break the sound barrier without vehicular power while jumping off the ‘edge of space’. On March 1, 1975, following assignments in Germany and Pakistan, Yeager retired from the Air Force after serving over 33 years on active duty, although he continued to occasionally fly for the USAF and NASA as a consulting test pilot at Edwards AFB.