You are here: Home › physics › Ludwig Boltzmann and Statistical Mechanics 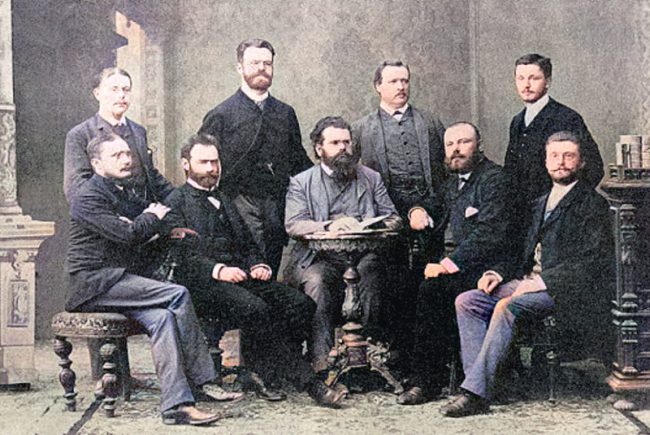 Ludwig Boltzmann and co-workers in Graz, 1887

On February 20, 1844, Austrian physicist and philosopher Ludwig Boltzmann was born. His greatest achievement was in the development of statistical mechanics, which explains and predicts how the properties of atoms determine the physical properties of matter.

“Who sees the future? Let us have free scope for all directions of research; away with dogmatism, either atomistic or anti-atomistic!”
— Ludwig Boltzmann, “Lectures on Gas Theory”, translated by Stephen George Brush (1971), p. 26

Ludwig Boltzmann was born in Vienna as the son of Ludwig Georg Boltzmann, a tax official, and his wife Maria Katharina, neé Pauernfeind, descendant of a wealthy merchand family. He was educated at home as well as in Linz before enrolling at the University of Vienna in 1863. Boltzmann graduated in physics and mathematics three years later and became the assistant to his teacher, Josef Stefan, who was back then the Head of the Physics Institute in the city. Boltzmann completed his dissertation on the Kinetic Theory of Gases, which seemed to presuppose the reality of atoms and molecules, but unfortunately many scientists like Ernst Mach and Wilhelm Ostwald disbelieved their existence, which resulted in long debates [4].

Already at the age of 25, Ludwig Boltzmann became a full Professor of Mathematical Physics at the University of Graz. In the late 1860s and early 70s, he traveled through Germany, studying and researching with Robert Bunsen, Hermann von Helmholtz,[5] Gustav Kirchhoff [6] and many more before joining the University of Vienna as a Professor. In this period, women were still not allowed to attend university lectures officially in Austria. However, Boltzmann met the passionate teacher of mathematics and physics, who was refused permission to audit lectures unofficially. He helped her successfully to appeal and married her just four years later.

The Statistical Concept of Nature

Going back to Graz, Ludwig Boltzmann began developing his statistical concept of nature. Boltzmann’s reputation was quite impressive and was known to often defend his theories through lectures across Europe. But unfortunately, his theories were often questioned by philosophers, wherefore Boltzmann himself started studying philosophy in order to combine the subject with his research in physics. And indeed, his lectures in natural philosophy were quite successful. For his talks, the largest lecture halls were chosen and still, people had to stand in the room to follow his words. Still, his work in philosophy was often criticized by contemporary philosophers. He founded the Austrian Mathematical Society in the early 1900s and to some of his most famous students belonged Lise Meitner and Paul Ehrenfest.[7]

However, Ludwig Boltzmann’s most important scientific contributions were in kinetic theory. The Maxwell–Boltzmann distribution for molecular speeds in a gas and the Maxwell–Boltzmann statistics as well as the Boltzmann distribution over energies remain the foundations of classical statistical mechanics. They proved to provide a significant insight to the meaning of temperature. Unfortunately, throughout his lifetime, many scientists still doubted the reality of atoms and molecules and Boltzmann went though numerous lively discussions considering the topic. But, shortly after his passing, Jean-Baptiste Perrin‘s [8] studies of colloidal suspensions, which based on Einstein’s theoretical studies of 1905, confirmed the values of Avogadro’s number and the Boltzmann’s constant. He was finally able to convince the world that the tiny particles really exist. Max Planck then stated that

“The logarithmic connection between entropy and probability was first stated by L. Boltzmann in his kinetic theory of gases“

and the formula for entropy S = kB lnW (with kB being the Boltzmann constant) was engraved on Boltzmann’s tombstone.

Boltzmann’s health had been very poor for a long time. Because of “neurasthenia” (nervous weakness) he was in psychiatric treatment several times. He suffered from extreme mood swings, states of highest excitement alternated with deepest depression. He was extremely short-sighted, as early as 1873 he expressed the fear that he would soon go blind. By 1900 his vision had already deteriorated so much that he hired a lady to read him scientific literature. He dictated his own works to his wife. He suffered from asthma, nasal polyps, headaches, kidney and bladder ailments and various other physical complaints. On 5 May 1906 Boltzmann was given sick leave due to “severe neurasthenia”, Stefan Meyer took over his lectures. Boltzmann spent the summer of 1906 with his family on the Adriatic in Duino, north of Trieste. On September 5, 1906, one day before his planned journey home, he hanged himself in his hotel room.

Leonard Susskind: Lecture 1: Boltzmann and the Arrow of Time, [13]