You are here: Home › archeology › The Prophet of Modern Archaeology – Joachim Winckelmann 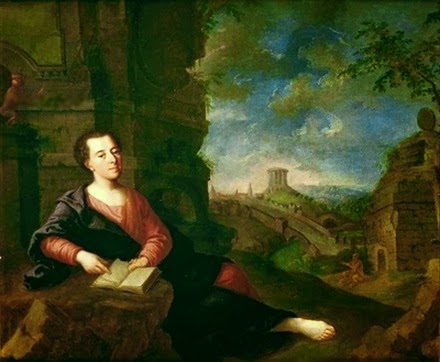 On December 9, 1717, German art historian and archaeologist Johann Joachim Winckelmann was born. Winckelmann was one of the founders of scientific archaeology and first applied the categories of style on a large, systematic basis to the history of art.

Joachim Winckelmann grew up in a poor family of a master shoemaker, but was highly supported by his blind school teacher, the Rector of the Stendal Latin School, Esaias Wilhelm Tappert, who let the young boy live with him. Winckelmann first attended the Stendaler Stadtschule, then the Stendaler Lateinschule until the end of 1735, the Köllnische Gymnasium in Berlin from 1736 to about Michaelis in 1736, and the Altstädtische Gymnasium in Salzwedel from Michaelis (29 September) in 1736 to the end of 1737. At Tappert’s suggestion the Stendal Schönebeck Foundation granted him a book scholarship in 1736. Winckelmann also received a scholarship from the Schönebeck Foundation to study at university, for which he received a receipt in 1739. This enabled Winckelmann to begin studying theology at the University of Halle (Saale) in 1738, but he gave it up without graduation in 1740 to work as a tutor for the von Grolmann family in Osterburg near Stendal. From 1741 to 1742 he studied medicine at the University of Jena. From summer 1742 to spring 1743 Winckelmann was a tutor in the family of Oberamtmanns Lamprecht in Hadmersleben and from 1743 to 1748 vice principal of the Latin School in the Altmärkisches Seehausen.

In the following years starting from 1748, Winckelmann converted to Catholicism and began working at the famous library with Heinrich von Bünau near Dresden. The library was often visited by famous members of the church. In this period, he managed to publish his first influential writings on Greek Art, which was so successful, that the second edition was published shortly after. Due to his increasing influence, Winckelmann was appointed as a librarian in Rome, where he began to research more detailed ton the history of art.

The Imitation of Art

“The only way for us, great, yes, if it is possible to become inimitable, is the imitation of the ancients”.

Italy and the History of the Art of Antiquity

In autumn 1755 Winckelmann moved to Rome. In the following years he undertook various journeys in Italy. He visited Naples and Pompeii and collected material for his future writings. When Archinto, who had taken him in in Rome, died in 1758, Winckelmann was given accommodation by Cardinal Alessandro Albani. In the same year he travelled to Florence, where he worked on Baron Philipp von Stosch’s collection of gems until 1759. One of the honours he received for this was his admission to the Accademia Etrusca. From 1761 he was commissioned by Alessandro Albani to design the programme for the artistic decoration of Villa Albani, the realisation of which was mainly in the hands of the painter Anton Raphael Mengs.  In 1763 Winckelmann met and probably also loved the baron Friedrich Reinhold von Berg (1736-1809). His love, however, would remain unrequited. After his departure, Winckelmann wrote a treatise on the abilities of the beautiful to perceive in art and to teach in it. The treatise is regarded both as a fundamental work of art theory and as a key text of his own personality, i.e. above all his homoerotic inclination.

In 1764 he was finally able to publish his major work Geschichte der Kunst des Altertums (History of the art of antiquity). Winckelmann did not only present the history of art, but also a developed system of Greek art. At its core, it is a characteristic of the style of sculpture according to its components and according to types and classes of ideal beauty. It was also Winckelmann who introduced the idea of development for the evaluation of ancient art. His system of classification and identification was highly influential and his general thoughts on art were critical for the theories of the early classicism in the German speaking area. 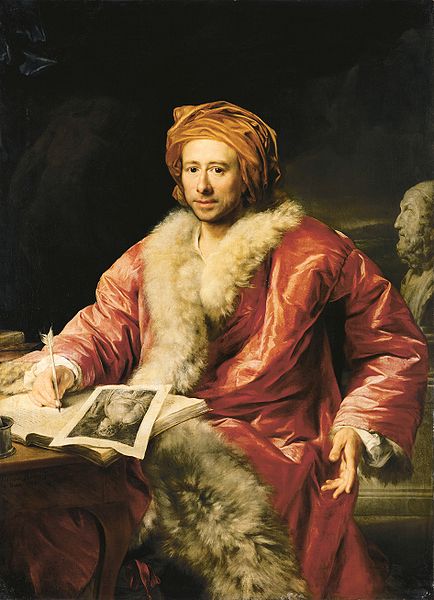 Winckelmann, in luxurious undress, by Anton von Maron, 1768: an engraving of an Antinous lies before him

Back in Germany, Winckelmann began taking painting lessons with Adam Friedrich Oeser, who also taught Johann Wolfgang von Goethe later on. Winckelmann then traveled through Italy, enjoying its art and culture and was supported by Italian priests. In 1768, Winckelmann traveled with the artist Bartolomeo Cavaceppi, but interrupted the journey shortly after. An illness and the difficulties of the journey led to a melancholic seizure, which made him stop the journey already in Regensburg. On the way back, he visited Vienna and was received by Empress Maria Theresa, and after another fever he continued on his return journey. In Trieste he stopped at the Hotel Locanda Grande and met the previously convicted cook Francesco Arcangeli, who was his neighbour. In the following days the two men met frequently. Winckelmann showed Arcangeli his four gold and silver medals, which he had received from Maria Theresa for his scientific merits. On the morning of June 8, Arcangeli tried on one of these occasions to strangle Winckelmann with a rope and rob the coins. When this failed, he stabbed him with a knife. Winckelmann’s resistance, however, was so strong that both hands were injured when he reached into the blade to defend himself against the knife. Five of the seven stitches that hit Winckelmann’s body were life-threatening. Winckelmann bled to death, but could still be contacted for hours and gave the authorities precise information about what had happened. During the interview, he referred to the perpetrator and cited greed as a motive. He died about six hours after the attack. About 40 years after the event, Domenico Rossetti was the first to make an effort to present the course of events as accurately as possible after the trial records. On his initiative, a tomb monument for Winckelmann was erected in Trieste, almost 60 years after his death.

For Winckelmann it was the highest task of art to represent beauty. For this he found the formula “noble simplicity and quiet grandeur”, which he opposed to the playful and overloaded of the Baroque and Rococo. During his lifetime, Joachim Winckelmann was honored numerous times. It was Winckelmann, who supported the excavations of the historical town Olympia and he managed to describe ancient Greek art from completely new perspectives. He illustrated the meaning of Greek art and its influence on Roman art and architecture and managed to transfer the history of art into political and cultural issues even though he is also known to have drawn an idealistic and utopian image of the Greek culture. It is his great merit to have led the reception of Greek antiquity out of the field of antiquarian book scholarship towards a sensual-erotic reception of ancient art. Winckelmann’s image of Roman and Greek antiquity had a major influence on the spirit of German classicism, especially that of Weimar classicism.