You are here: Home › computer science › George Boole – The Founder of Modern Logics

On December 8, 1864, British mathematician and logician George Boole passed away. He is best known as the inventor of the prototype of what is now called Boolean logic, which became the basis of the modern digital computer. Thus, Boole also is regarded as one of the founders of the field of computer science.

“It appeared to me that, although Logic might be viewed with reference to the idea of quantity, it had also another and a deeper system of relations. If it was lawful to regard it from without, as connecting itself through the medium of Number with the intuitions of Space and Time, it was lawful also to regard it from within, as based upon facts of another order which have their abode in the constitution of the Mind.”
— George Boole, The Mathematical Analysis of Logic, 1847

George Boole was born on November 2, 1815 as first of four children to his father John Boole, a London tradesman who was interested in science and in particular the application of mathematics to scientific instruments, and his wife Mary Ann Joyce, a lady’s maid. The family were not well off, partly because John’s love of science and mathematics meant that he did not devote the energy to developing his business in the way he might have done. George Boole had an elementary school education, but little further formal and academic teaching. William Brooke, a bookseller in Lincoln, has introduced him into the Latin language, when George went on to teach himself Greek.

By the age of 14 he had become so skilled in Greek that it provoked an argument. He translated a poem by the Greek poet Meleager which his father was so proud of that he had it published. However the talent was such that a local schoolmaster disputed that any 14 year old could have written with such depth. By that time he had entered the school of Thomas Bainbridge, the Bainbridge’s Commercial Academy in Lincoln. This school did not provide the type of education he would have wished but it was all his parents could afford. However he was able to teach himself French and German studying for himself academic subjects that a commercial school did not cover.

From Assistant School Teacher to Professor of Mathematics

At age 16 Boole took up a junior teaching position in Doncaster, at Heigham’s School. This was rather forced on him since his father’s business collapsed and he found himself having to support financially his parents and his younger siblings. He maintained his interest in languages, began to study mathematics seriously. In 1833 he moved to a new teaching position in Liverpool but he only remained there for six months before moving to Hall’s Academy in Waddington, four miles from Lincoln. In 1834 he opened his own school in Lincoln although he was only 19 years old. Four years later he took over Hall’s Academy, at Waddington, outside Lincoln, following the death of Robert Hall. In 1840 he moved back to Lincoln, where he ran a boarding school. From 1838 onwards Boole was making contacts with sympathetic British academic mathematicians, and reading more widely. He studied algebra in the form of symbolic methods, as these were understood at the time, and began to publish research papers. Boole’s status as mathematician was recognised by his appointment in 1849 as the first professor of mathematics at Queen’s College, Cork in Ireland. He taught there for the rest of his life, gaining a reputation as an outstanding and dedicated teacher. 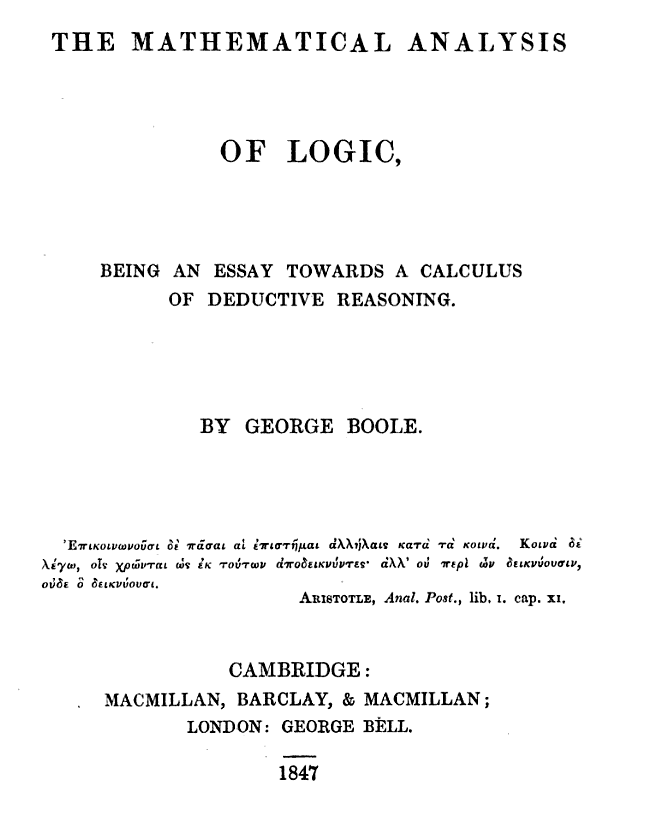 Cover page of George Boole “The Mathematical Analysis of Logic”(1847)

Investigations into the Laws of Thought

“The design of the following treatise is to investigate the fundamental laws of those operations of the mind by which reasoning is performed; to give expression to them in the symbolical language of a Calculus, and upon this foundation to establish the science of Logic and construct its method;”
– George Boole, An Investigation of the Laws of Thought (1854)

Contrary to widespread belief, Boole never intended to criticise or disagree with the main principles of Aristotle‘s logic. Rather he intended to systematise it, to provide it with a foundation, and to extend its range of applicability. Boole’s initial involvement in logic was prompted by a current debate on quantification, between Sir William Hamilton [5] who supported the theory of “quantification of the predicate”, and Boole’s supporter Augustus De Morgan [6] who advanced a version of De Morgan duality, as it is now called. Boole’s approach was ultimately much further reaching than either sides’ in the controversy. It founded what was first known as the “algebra of logic” tradition. Among his many innovations is his principle of wholistic reference, which was later, and probably independently, adopted by Gottlob Frege and by logicians who subscribe to standard first-order logic.[7] In his 1847 publication The Mathematical Analysis of Logic, Boole created the first algebraic logic calculus and thus founded modern mathematical logic, which differs from the logic of the time by consistent formalisation. He formalised classical logic and propositional logic and developed a decision-making procedure for the true formulae over a disjunctive normal form.

In 1854 Boole published his most important work ‘An investigation into the Laws of Thought, on Which are founded the Mathematical Theories of Logic and Probabilities‘. Boole approached logic in a new way reducing it to a simple algebra, incorporating logic into mathematics. He pointed out the analogy between algebraic symbols and those that represent logical forms. It began the algebra of logic called Boolean algebra which now finds application in computer construction, switching circuits etc.

“It is upon the foundation of this general principle, that I purpose to establish the Calculus of Logic, and that I claim for it a place among the acknowledged forms of Mathematical Analysis, regardless that in its object and in its instruments it must at present stand alone.”
– George Boole, The Mathematical Analysis of Logic, 1847

Many honours were given to Boole as the genius in his work was recognised. He received honorary degrees from the universities of Dublin and Oxford and was elected a Fellow of the Royal Society (1857). However his career, which was started rather late, came to an unfortunately early end when he died of fever-induced pleural effusion at the age of 49 in 1864. Boolean algebra has wide applications in telephone switching and the design of modern computers and his work has to be seen as a fundamental step in today’s computer revolution.

At yovisto academic video search  you might learn more about Boolean Algebra in the lecture of Prof. Jim Pytel from Columbia Gorge Community College.