You are here: Home › archeology › At the Beginning was a Bet – Georg Friedrich Grotefend and the Cuneiform 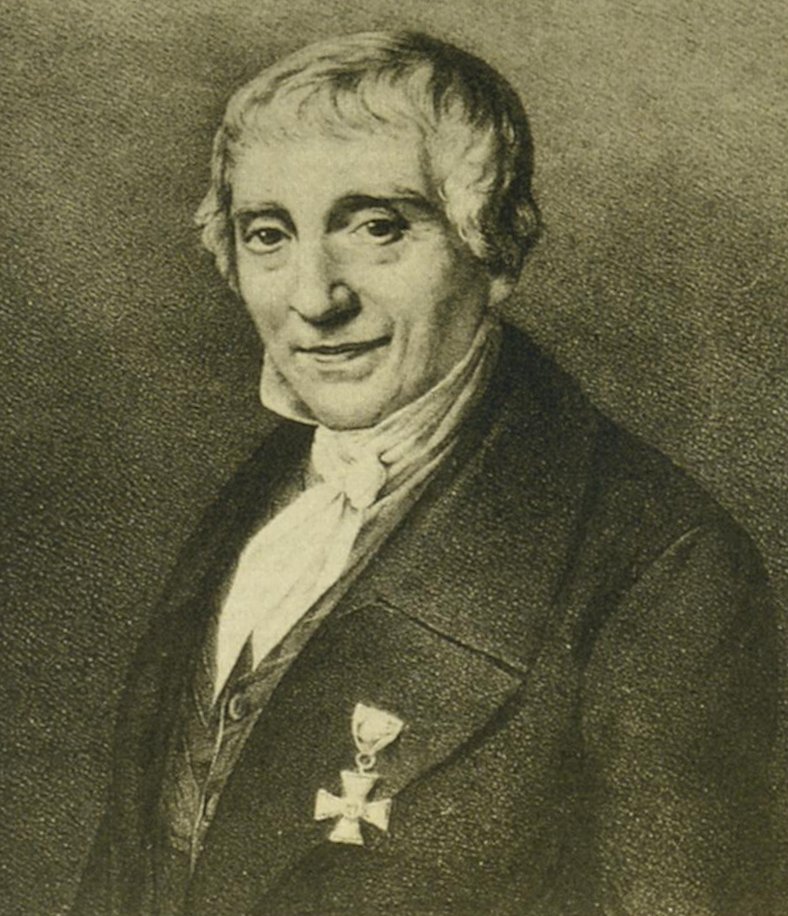 On June 9, 1775, German epigraphist and philologist Georg Friedrich Grotefend was born. Although most of you will probably never heard of him, he is well known for his contributions toward the decipherment of cuneiform.

Do you know Cuneiform?

Do you know cuneiform? It is the name of the old writing of Mesopotamia and its roots date back to the time of the origins of civilization, when also Egyptian hieroglyphs were invented. But, in difference to the Egyptian hieroglyphs that were considered to be sacred and thus were not allowed to be changed and to develop over millenia, cuneiform had developed, changed from mere pictograms to so-called phonograms to form one of the very first ‘alphabets‘. Thereby, cuneiform also was assimilated by foreign nations and adapted to their native language, because they were able to encode the sound of the language.

A cuneiform letter simply stood for a sound and did not symbolize an entire abstract or real object. Likewise to Egyptian hieroglyphs the knowledge how to read and write cuneiform had vanished over the ages, and thus, cuneiform scripture also were subject of (mostly fruitless) trials of decipherment. In the 1760s, the expedition of Danish cartographer and explorer Carsten Niebuhr [2] was able to copy various cuneiform inscriptions in several 2,000-year-old ruins and palaces in the antique Persian capital of Persepolis and return them to Europe. These inscriptions should serve as the basis of Grotefend’s decipherment work.

Georg Friedrich Grotefend was born in Hannoversch Münden, a small town in Lower Saxony as the son of a historian. He studied at the University of Göttingen philology and theology, where he became friend with the classical German scholar and archeologist Christian Gottlob Heyne. Upon Heyne’s recommendation he became grammar school teacher at the Gymnasium in Göttingen in 1797. His first publication ‘De pasigraphia sive scriptura universali‘ in 1799 was so successful that it led to his appointment as prorector of the gymnasium of Frankfurt in 1803, and shortly afterwards even as conrector. In 1821 he became director of the gymnasium at Hannover, a post which he retained till his retirement in 1849 and died on December 15, 1853, in Hannover. 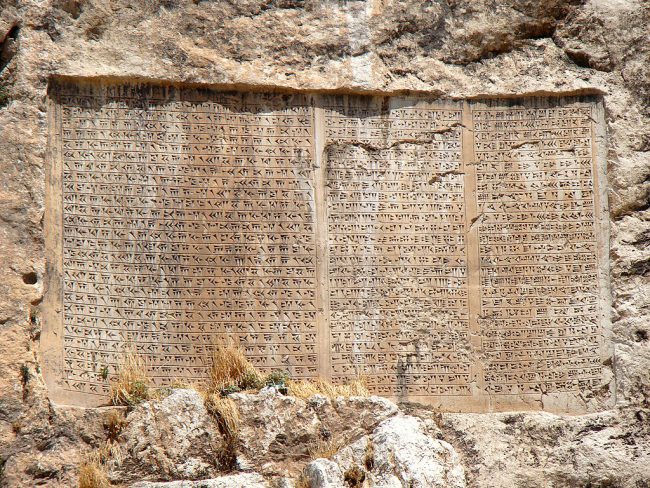 A large cuneiform inscription found on the south side of the Van Castle hill, four kilometres west of modern-day Van, in eastern Turkey. It’s several metres tall and wide, 25 centuries old and the message comes from the Persian king Xerxes.

Let’s get back to the cuneiform inscriptions of Carsten Niebuhr’s expedition. The cuneiform inscriptions of Persia had for some time been attracting attention in Europe. Actually Niebuhr did loose his eyesight over his decipherment work and Grotefend’s friend, Tychsen of Rostock, believed that he had ascertained the characters in the column, now known to be Persian, to be alphabetic.

How to Decipher an absolutely Unknown Language?

Without any particular knowledge of Oriental languages, but adept in solving puzzles, Georg FriedrichGrotefend bet some drinking companions that he could find the key to deciphering cuneiform. Actually, his friends claimed that it was absolutely impossible to read a language about which nothing is known, neither form nor content. But, knowing that the inscriptions dated from about the 5th century BC and were associated with the sculptures of kings. The Danish archaeologist Bishop Munter had shortly before recognized the term “king” as an oblique wedge. As a teacher of Greek, Georg Friedrich Grotefend knew the historical environment and the names of the Persian kings of that time. It was also known to him from Greek tradition that the royal names were always recorded in connection with the name of the predecessor. His search was based on the form of the royal names published a few years earlier by the French Orientalist Abraham Hyacinthe Anquetil-Duperron with his translation of the Old Iranian “holy book” Avesta. Grotefend noted that the kings in the inscription before him could be neither Cyrus I nor Kambyses I, since both names began with the same character, but the first character was different. Nor could it be Cyrus and Artaxerxes I, since the first name was too short and the second too long. So only Darius and Xerxes remained. In fact, it was not the name of the heir to the throne, Xerxes I, but that of his predecessor, Darius I, that was marked with the royal title. A third name proved to be that of Hystaspes, the governor of Parthia and father of Darius I. 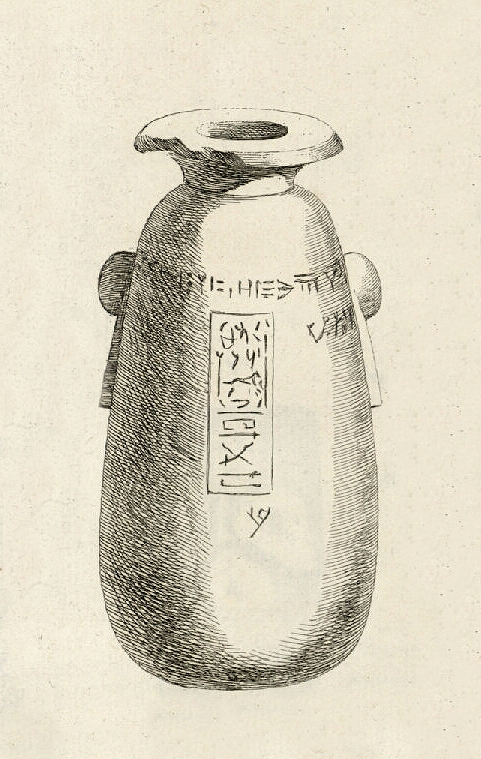 The quadrilingual “Caylus vase” in the name of Xerxes I confirmed the decipherment of Grotefend once Champollion was able to read Egyptian hieroglyphs.

Grotefend was able to pick out repetitive phrases and then compared those letters with the kings’ names, which he knew from Greek historical texts. Step by step he discovered thirteen letters, of which he deciphered 9 correctly. His discovery was first reported on Sept. 2, 1802. In 1815, he gave an account of his discoveries in Heeren’s work on ancient history. Grotefend’s achievements initially remained known only to a small circle of scholars around the Göttingen Society of Sciences, of which he became a member in 1820. Finally, in 1837 he published his Neue Beiträge zur Erläuterung der Persepolitanischen Keilschrift. In 1893, the philologist Wilhelm Meyer made documents known to a wider public in the news organ of the Grotefends Society. What remained was to work out the results of Grotefend’s discovery, a task performed by Eugène Burnouf, Christian Lassen, and Henry Rawlinson.[3] It should take additional 45 years to decipher the rest of all the letters. Finally, however, the key that opened the history of this significant historical culture was completed and Grotefend’s work laid the foundation for this.

The preface to Friedrich Wagenfeld’s translation of a Greek manuscript of Sanchuniathon’s prehistory of the Phoenicians (Hanover 1836), which turned out to be an invented source a little later, also provided grotefend. In 1847 Grotefend was admitted to the Prussian Academy of Sciences as a corresponding member. Georg Friedrich Grotefend retired in 1849 as headmaster. Georg Friedrich Grotefend was an honorary citizen of the city of Hanover and died there on 15 December 1853 in Hanover.