You are here: Home › archeology › Heinrich Schliemann and his Dream of Troy 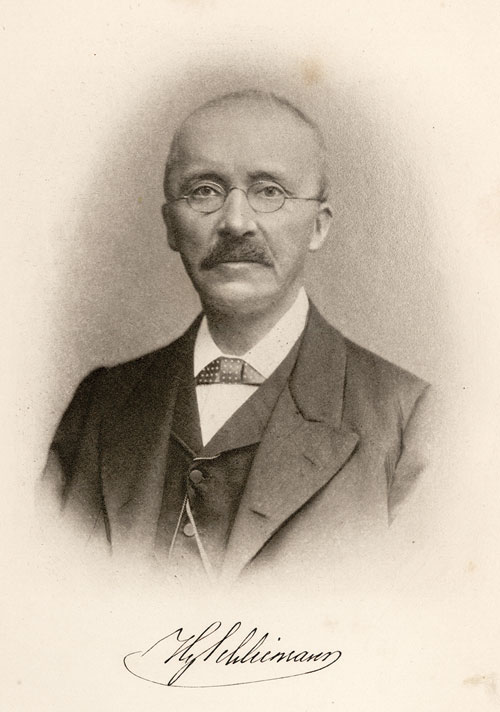 On December 26, 1890, Heinrich Schliemann, German businessman and amateur archaeologist, and livelong advocate of the historical reality of places mentioned in the works of ancient Greek poet Homerpassed away. His dreams came true when he succeeded in excavating Hissarlik, now presumed to be the site of Troy, along with the Mycenaean sites Mycenae and Tiryns. Without Schliemann, the world of ancient Greek history and the verses of Homer would have remained in the dark state of mythology and fiction. His efforts not only gave way for modern archeology but also have changed the way we are looking at our historical roots today.

Heinrich Schliemann was born in Neubukow, Mecklenburg-Schwerin on January 6, 1822 to Ernst Schliemann, a poor Protestant minister and his wife Luise Therese Sophie. By all accounts Heinrich’s early life was a hard one, especially when his mother died in 1831 when Heinrich was only nine years old, whereafter his father sent Heinrich to live with his uncle, Friedrich. When he was eleven years old, Heinrich enrolled in the Gymnasium (grammar school) at Neustrelitz. His later interest in history was initially encouraged by his father, who had schooled him in the tales of Homer’s Iliad and Odyssey. Schliemann later claimed that at the age of 8, he had declared he would one day excavate the city of Troy.

Schliemann’s time at the grammar school was curtailed, as his father could no longer afford to pay the school fees. In fact, his father was accused of embezzling church funds to pay for his son’s education. Schliemann had to leave and continued at Realschule, a vocational school, where his scholarly studies took second place to work related studies. By 1836, at the age of 14, Schliemann again was forced to leave the school, when hiss father could not even afford the more modest fees of the Realschule. Heinrich became a grocer’s apprentice at age fourteen, where he labored for five years, reading voraciously whenever he had a spare moment. In 1841, Schliemann fled to Hamburg and became a cabin boy on the Dorothea, a steamship bound for Venezuela. After twelve days at sea, the ship foundered in a gale, and the survivors washed up on the shores of the Netherlands.

Making a Fortune in California and with the Crimean War

In 1844,  Schliemann took a position an import/export firm that sent him as a General Agent to St. Petersburg in 1846. In time, Schliemann represented a number of companies. He learned Russian and Greek, employing a system that he used his entire life to learn languages. By the end of his life, he could converse in English, French, Dutch, Spanish, Portuguese, Swedish, Polish, Italian, Greek, Latin, Russian, Arabic, and Turkish as well as German. In 1850, Heinrich learned of the death of his brother, Ludwig, who had become wealthy as a speculator in the California gold fields. Thus, he went to California in early 1851 and started a bank in Sacramento buying and reselling over a million dollars of gold dust in just six months. In 1852, he sold his business and returned to Russia, where he attempted to live the life of a gentleman and married Ekaterina Lyschin, the niece of one of his wealthy friends.  Schliemann made yet another quick fortune as a military contractor in the Crimean War, 1854-1856. He cornered the market in saltpeter, sulfur, and lead, constituents of ammunition, which he resold to the Russian government.

By 1858, Schliemann gave up his Russian enterprises to devote his time and wealth to the pursuit of his childhood dream, the discovery of historical Troy and Homer’s Greece. Finally after years of preparation, in 1868 he proceeded to Greece, where he visited various Homeric sites. From these experiences he published the book Ithaka, der Peloponnes und Troja, in which he advanced two theories that Hissarlik, not Bunarbashi, was the true site of Troy and that the Atreid graves at Mycenae were situated inside the walls of the citadel. This work earned him a doctorate from the University of Rostock.

Schliemann’s Excavations at Troy and Mycenae

In 1870 Schliemann’s excavations at Troy began and he really discovered a great treasure of gold jewelry and other objects. But, he encountered difficulties from the Turkish government regarding permission to continue his excavations. At the beginning of 1874 Schliemann travelled to Mycenae to search further for traces of the people and places mentioned in Homers Ilias, in particular for a grave of Agamemnon, which he suspected to be in Mycenae. For six days he had twelve workers on the Acropolis dig 34 search ditches a good five metres deep until the illegal excavation was completed by the authorities. In the same year Schliemann was sued by the High Gate for the surrender of half of his Trojan treasures before an Athens court; the trial ended with a settlement in which Schliemann legally acquired the treasure of Priamos against payment of 50,000 gold francs. 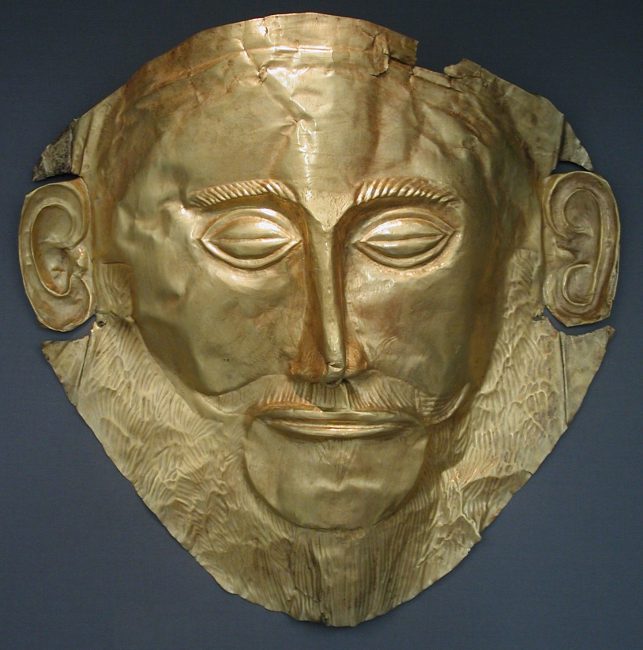 The ‘Mask of Agamemnon’, discovered by Heinrich Schliemann in 1876 at Mycenae now exhibited at the National Archaeological Museum of Athens.

In the summer of 1876 the excavation permit for Mycenae was available, so that he and his wife Sophia, who for the first time independently led partial excavations here, officially started the extensive campaign with 63 workers on August 7. He began to dig near the famous Lion Gate, eventually unearthing the famous Dome Tombs, the burial place of the Mycenaean kings. On 28 November Schliemann telegraphed to the Greek king that he had found the tomb of Agamemnon and his family. The next day, however, he found the largest and most artistic golden death mask, known as the Gold Mask of Agamemnon. He continued the excavations until 3 December. By then he had raised 13 kilograms of gold treasures. These were stored by the Greek authorities in the State Bank of Athens and can now be seen in the National Archaeological Museum.

From March 17, 1884, Schliemann carried out very successful excavations at Tiryns together with Dörpfeld. Sixty workers removed the rubble of the acropolis, where cyclopean walls had already been discovered in 1876, which now proved to be the foundation walls of a Mycenaean royal palace with a large arcaded courtyard, altar and frescoed chambers, bathroom and megaron. The discovery of the palace provided science with sound knowledge of the extent, flourishing and decline of the Mycenaean era. In 1886, Schliemann and Dörpfeld finished the excavations at Tiryns and went to Knossos on Crete, which was still Ottoman at the time, to buy excavation land and obtain an excavation license, but could not agree on a price with the landowner. In 1886/87, Schliemann, who was in poor health, went to Egypt, first to recover on a Nile cruise with his own yacht and then, from January 1888, to dig for Alexander’s tomb with Virchow at the Ramleh Station in Alexandria.

On December 25, 1890, while his partner Dörpfeld was leading another dig at Troy, Schliemann died in Naples. He had had a life of great accomplishments, rushing impatiently and with insurmountable energy from project to project. His drive and enthusiasm subjected the world of Homer and the profession of archeology to a fresh breeze, which led to a new era of archeological scholarship.