You are here: Home › aviation › André-Jacques Garnerin and the First Parachutes 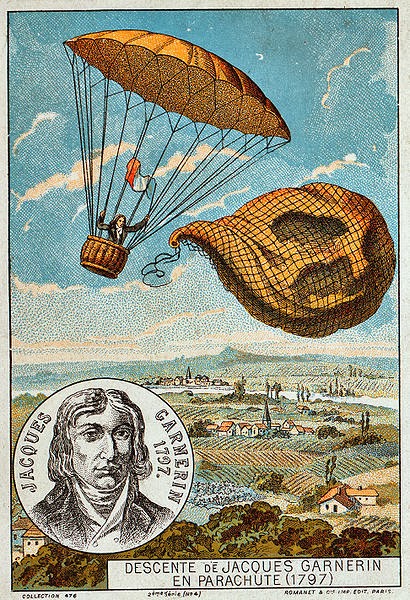 André-Jacques Garnerin releases the balloon and descends with the help of a parachute, 1797. Illustration from the late 19th century.

On October 22, 1797, French balloonist and inventor André Garnerin, made the first safe descent with a silk parachute from a ballon at Parc Monceau, Paris.

Bold Garnerin went up
Which increased his Repute
And came safe to earth
In his Grand Parachute.

André Garnerin was a student of Jaques Charles. Charles was a well known ballooning pioneer and launched along with the Robert brothers the very first unmanned hydrogen filled balloon in 1783. He also started experimenting with manned flights, just like Garnering later, who was then announced Official Aeronaut of France.

As Charles’ student, Garnerin got to perform several experiments and demonstrations of his designs and constructions. He got quite a lot of attention, especially when he announced that on the next flight, his passenger would be a woman. By governmental officials, Garnerin was then questioned about this project and it was highly doubted that a woman should be on his flight due to the concerns that reduced air pressure might effect her inner organs. However, after the Minister of Interior and the Minister of the Police discussed this topic, it was found that it should no longer be a scandal when two people of different sexes ascend in a balloon together, also the chosen woman was completely aware of the possible health risks. The chosen one was Citoyenne Henri and she became known as the first woman “who ever had the courage to trust herself in the regions of air“. This is interesting since she was not even the first woman to fly in a balloon. There are three known women, who achieved this before in Paris. Garnerin and his first female passenger ascended into the sky towards the north of Paris and landed shortly after without any incident. 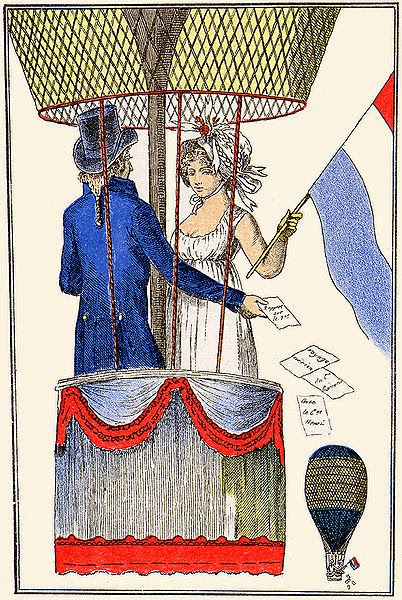 With his experience in ballooning and his fame, Garnerin started experimenting with umbrella-shaped parachutes. Already Leonardo da Vinci wrote in detail about his ideas of a parachute device. However, it was André Garnerin, who performed the first parachute descent with a device made of silk on October 22, 1797 in Paris. His construction was basically a closed umbrella with a pole running down in the middle. He attached a basket to it and at an altitude of about 900m, he severed the rope that connected his parachute to the balloon. His balloon continued its journey into the skies while he fell with his parachute downwards. Even though the landing was very rough, Garnerin was not injured and his first silk parachute flight was a success.

In the following years, Garnerin toured across Europe, but mainly England to demonstrate his abilities and designs in spectacular jumps at higher and higher altitudes. In 1803, the pioneer managed to cover a distance of 395 km between Paris and Germany with a balloon.

At yovisto academic video search, you may enjoy video footage of Felix Baumgartner. On October 14, 2012 he broke several world records like achieving the parachute jump from the highest altitude and greatest free fall velocity.