You are here: Home › aviation › Around the World in 175 Days – The Circumnavigation of the Earth by Plane 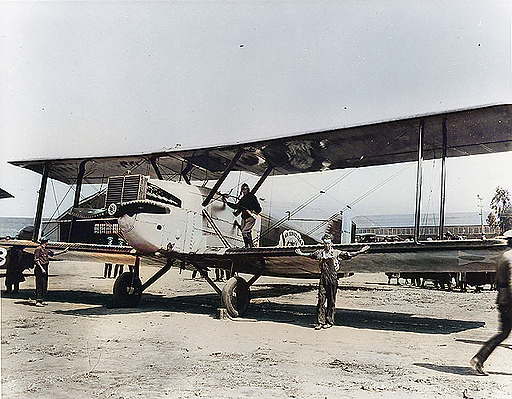 The aircraft “Chicago” led the first round the world flight in 1924.

On September 28, 1924, the first successful circumnavigation of the earth by plane was achieved, when after the 175 days journey a team of aviators of the United States Army Air Service landed again in Seattle. Airmen Lowell H. Smith and Leslie P. Arnold, and Erik H. Nelson and John Harding Jr. made the trip in two single-engined open-cockpit Douglas World Cruisers (DWC) configured as floatplanes for most of the journey. Four more flyers in two additional DWC began the journey but their aircraft crashed or were forced down. All airmen survived.

The U.S. were not the only ones longing for the first aerial circumnavigation. Already in the early 1920s several countries started their preparations. The first unsuccessful attempt was accomplished by British pilots in 1922 and only one years later, the French failed too. When more and more countries announced that they were planning on sending teams of pilots around the Earth, the American Air Service gained interest as well. Quickly, a planning group was announced and the search for a suitable plane began. At first, the Fokker T-2 aircraft was inspected, it would achieve a maximum speed of 150km/h and obtained a maximum range of about 4000 km. As an alternative the Davis-Douglas Cloudster was taken into consideration, which had the advantage of fitting two pilots in the cabin, but the task force was looking for additional options like interchangeable landing gears, the ability of water landings and so on.

Donald Douglas was responsible for designing and building aircraft as head of the Davis-Douglas Company. His goal was to construct a plane able to achieve a coast to coast non stop flight across the United States. Unfortunately, his attempts failed, but still he was asked to show the construction plans of the Cloudster. However, he sent plans for a torpedo bomber DT-2 instead, originally built for the U. S. Navy, which fit into the plans perfectly. Douglas, assisted by Jack Northrop,[3] began to modify a DT-2 to suit the circumnavigation requirements. The main modification involved its fuel capacity. All the internal bomb carrying structures were removed with additional fuel tanks added to the wings and fuselage fuel tanks enlarged in the aircraft. The aircraft were equipped with no radios, nor avionics of any sort, leaving their crew to rely entirely on their dead reckoning skills to navigate throughout the venture. He named the new plane Douglas World Cruiser (DWC), adjusted the air craft to all of the War Department’s expectations and delivered the DWCs in spring 1924. 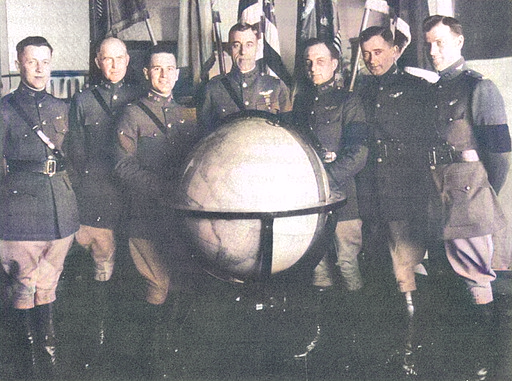 Four planes — the Seattle, Chicago, Boston, and New Orleans — left Santa Monica, California, on March 17, 1924, for Seattle, Washington, the official start of the flight. On April 4, they took off for their first goal Alaska. Unfortunately the first problems already began. The lead airplane was named Seattle and had technical problems, which forced them to stay behind. When they tried to catch up later in April, the plane crashed into a mountain at Alaska. The crew survived but the craft was totally destroyed. The remaining three teams were now led by the plane Chicago and they continued their route across the North Pacific but avoiding the Soviet Union which did not give their permission for the aircrafts to cross their territory. The following legs were Korea, Japan, Thailand, India, continuing their way to the Middle East.

Again, the Chicago had to land due to technical problems, this time in present day Vietnam. The repairs took place in Hue and the crew continued their tour towards Europe. They reached Paris in July and prepared for the crossing of the Atlantic Ocean via England. Another airplane was taken down while flying across the ocean. The Boston sank while the crew survived and the journey continued with only two planes left, the Chicago and the New Orleans. Another plane, the Boston II joined them in the Nova Scotia area and together they headed to Washington DC. The journey was completed on September 28, 1924 when they arrived back at Seattle. During their trip, the pilots flew 44,085 km, took 175 days, the plane’s engines were changed five times and equipped with new wings twice. The Douglas Aircraft Company adopted the motto, “First Around the World – First the World Around“. The American team had greatly increased their chances of success by using several aircraft and pre-positioning large caches of fuel, spare parts, and other support equipment along the route. They often had several US Navy destroyers deployed in support.

The aircraft were brought to museums across the country and even the crashed Seattle was recovered and is today displayed in the Alaska Aviation Heritage Museum.

Around The World By Airplane (1924) First Aerial Circumnavigation, [8]