You are here: Home › astronomy › Jérôme Lalande – Astronomer in Times of the Enlightenment and the French Revolution

On July 11, 1732, French astronomer, freemason and writer Jérôme Lalande was born. Lalande is best known for having determined the Moon’s parallax from Berlin for the French Academy in 1751. His planetary tables, into which he introduced corrections for mutual perturbations, were the best available up to the end of the 18th century.

Jérôme Lalande first studied at the Jesuit College in Lyon and later went to Paris to study law. While studying in Paris, Lalande lived at the Hotel de Cluny in Paris, where Joseph-Nicolas Delisle, the French astronomer and cartographer, had an observatory. Despite keeping up with his law studies, Lalande became also interested in astronomy and began to attend Delisle’s astronomy lectures at the Collège Royale and Pierre Lemonnier’s lectures on mathematical physics.

Despite being a committed observer as Delisle’s assistant, he completed his law studies in 1751 and practised in his native Bourg-en-Bresse. However, Nicolas de Lacaille was sent by the Académie des Sciences to make observations to determine the distances to the Moon and Mars. Lemonnier was made responsible for the observations to be made in Berlin, but he asked Lalande to take his place. After stimulating contacts with Pierre-Louis Moreau de Maupertuis and Leonhard Euler in Berlin, [8] Lalande published some reductions of his measurements in the Mitteilungen der Akademien von Berlin und Paris. His work led to his appointment as a foreign member of the Prussian Academy of Sciences and in 1752 as director of the Berlin Observatory. In 1753 he was elected to the Académie des Sciences. After that, a dispute arose with his teacher Lemonnier about the correct calculation of the flattening of the earth, which was needed for the calculation of the moon’s orbit (equatorial-horizontal parallax). A commission of the Paris Academy decided in favour of Lalandes. For Lalandes, however, this was only a “Pyrrhic victory”, as his relationship with his teacher Lemonnier cooled down after that. In 1764, Lalande was elected a foreign member of the Göttingen Academy of Sciences. Lalande’s scientific outcomes were published in Acta eruditorum as well as through the Berlin Academy and the Paris Academy.

Halley’s Comet and the Lunar Parallax

To determine the lunar parallax, Lalande had to calculate some assumptions first. For instance, it was important to figure out the amount of which the Earth differed from a sphere as it is flattened at the poles. Lalande and Lemonnier disagreed on the problem and the Paris Academy set up a commission, settling for Lalande’s version. Lalande then worked as an assistant to Alexis-Claude Clairaut on a better orbit calculation of Halley ‘s comet, working on the three-body problem like Clairaut , d’Alembert and Euler . Using methods of Clairaut, Lalande was able to successfully calculate the orbital perturbations of the comet by large planets. He was supported in this extensive work by Nicole-Reine Lépaute (1723-1788), whose contribution, like that of other female mathematicians of the time, who were allowed to carry out “calculations” for their male colleagues, was largely ignored. For “Halley” Lalande predicted that the comet would come a few months later than expected at its next approach to the Earth’s orbit because of the unusually strong orbital disturbances by Jupiter. Charles Messier had searched in vain for the comet expected in 1757;[11] it was first sighted by Johann Georg Palitzsch at the end of 1758 and the perihelion in March 1759 was accurate to four weeks – which was a great success for the new perturbation theory methods. Lalande’s prediction was regarded by his contemporaries as a triumph of the mainly mechanistic world view of the Enlightenment..[10] 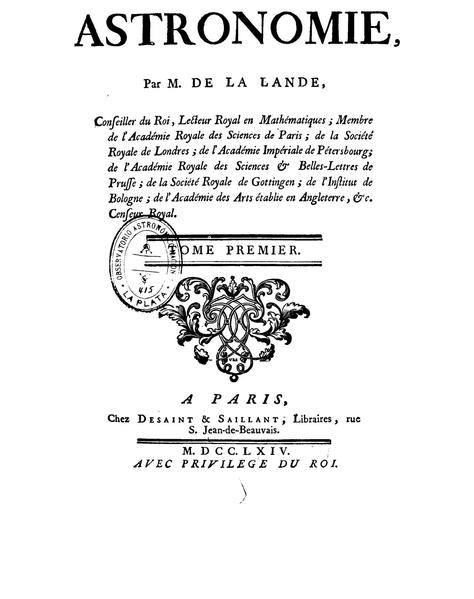 Lalande was also involved in the processing of the data of the 1761 and 1769 transits of Venus, including those carried out by James Cook in the South Seas [12] (Endeavour expedition, Charles Green carried out the observations in Tahiti in June 1769). In 1771 Lalande succeeded in presenting an improved calculation of the Earth’s orbit based on worldwide observations of the Venus transit of 1761 and 1769. His statement of this “astronomical unit” of 153 ± 1 million km already corresponds to the present value of 149.6 million km, down to 2 %. From 1765 to 1766 he travelled to Italy, where he asked the Pope at an audience to remove the works of Nicolaus Copernicus and Galileo from the “Index”. Between 1760 and 1776 as well as between 1794 and 1807, Jérôme Lalande functioned as editor of the astronomical almanac Connaissance des temps. He added precice tables of lunar distances from stars, especially valuable for navigation. In 1762, Lalande was appointed professor of astronomy at the Collège Royale, a post he held for 46 years. In 1791, he was elected Head of the Collège de France where one of his first acts was to admit women to all classes. Four years later, Jérôme Lalande was appointed director of the Paris Observatory.

Together with his friend Claude Adrien Helvétius, in 1776 the Enlightenment founded one of the most important freemason lodges in the Age of Enlightenment, the so-called philosopher’s lodge of Neuf Sœur in Paris. He himself was their first lodge master. He contributed 250 articles in the field of astronomy to the encyclopedia of Diderot and d’Alembert.[9] Lalande’s partner Louise du Pierry (born 1746) later became the first female professor of astronomy. The Enlightenment philosopher Lalande was known as an atheist, which was to his advantage during the French Revolution. In 1799 his dictionary for atheists was published, in which he later, to his displeasure, also included Napoleon Bonaparte. His “ugliness” was the target of many contemporary caricatures. He himself took no offence at it and did not allow it to disturb his relationships with women. His joke is expressed, for example, in the following anecdote. It was common knowledge that Voltaire,[13] with whom Lalande had a friendly relationship, did not like cats. When Voltaire blasphemed that as animals they did not even make it under the 33 constellations, the avowed cat lover Lalande named a constellation Felis (cat). However, many astronomers did not like it, and it was therefore only found on some celestial maps. On the other hand, the first European astronomical congress in Gotha in 1798, where he met Johann Elert Bode at the invitation of Franz Xaver von Zach, decided that the “hot-air balloon” also proposed by Lalande should remain. In 1922 at the latest, this constellation was also banned from official maps.

Jérôme Lalande died at 74 and was buried at the Cimetière du Père Lachaise in Paris.