You are here: Home › philosophy › Boethius and the Consolation of Philosophy 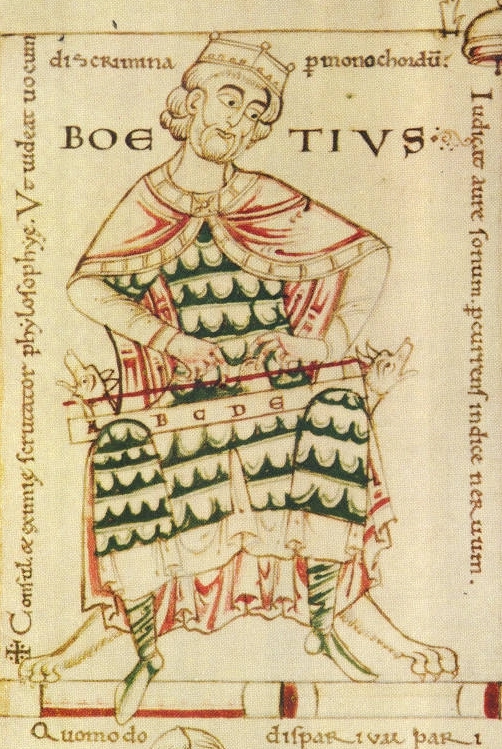 According to the definition of Pope Leo XIII, on October 23, either between 475 and 477 AD, or in the early 480s, Roman senator, consul, magister officiorum, and philosopher of the early 6th century Anicius Manlius Severinus Boëthius was born. Boethius is best known for his Consolation of Philosophy, a philosophical treatise on fortune, death, and other issues, which became one of the most popular and influential works of the Middle Ages. As the author of numerous handbooks and translator of Aristotle, he became the main intermediary between Classical antiquity and following centuries.

“Wherefore not without cause has one of your own followers asked, “If God is, whence come evil things? If He is not, whence come good?”
— Boethius, The Consolation of Philosophy

Boethius was probably born in the early eighties of the 5th century. The place of birth is unknown; the assumption that it is Rome lacks a good explanation. On his mother’s side Boethius descended, as his name Anicius shows, from the Anician dynasty, which had been Christian since the 4th century and was one of the most influential senator families in late antiquity. His grandfather had been Pretorian prefect under emperor Valentinian III and was killed in September 454 in connection with the murder of Flavius Aëtius.[1] His father Manlius Boethius became later also Praetorian prefect, city prefect of Rome and in the year 487 consul without colleagues; he must have died soon after his consulate, because Boethius grew up fatherless. After his father’s death, Boethius found refuge in the house of Quintus Aurelius Memmius Symmachus, the consul of 485, who belonged to the famous senatorial Symmachi family and worked as a philologist and historian. 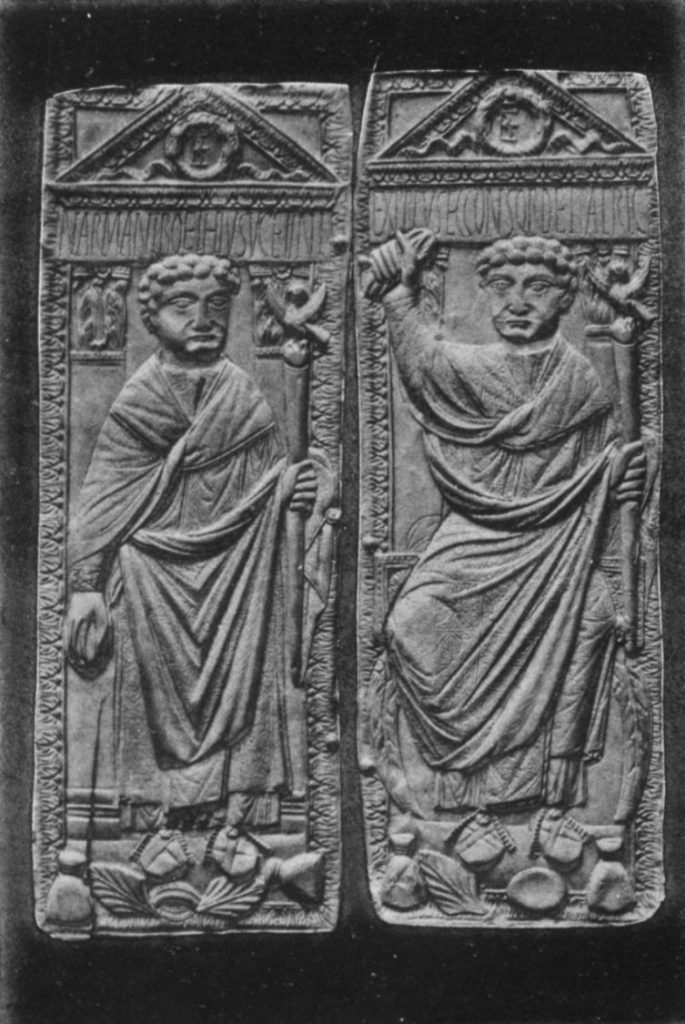 Boethius received an excellent education. After his studies Boethius married Symmachus’ daughter Rusticiana. He worshipped his father-in-law, who – following a family tradition – cultivated the traditional Roman education intensively. Boethius began early to write his scientific works and gained fame as a scholar. Boethius also played an important role in politics; he was promoted to the highest state offices. In 507 at the latest he received the high honorary title patricius, in 510 he was consul, like his father, without colleagues. For the year 522 his two sons Symmachus and Flavius Boethius, although not yet grown up, were appointed consuls by King Theoderic. In the same year Theoderic put him at the head of the imperial administration by appointing him magister officiorum. Boethius thus reached the height of his political power. Theoderic had come to Italy with his East Gothic foederati in 489 on behalf of the East Roman emperor Zeno to end the reign of Odoacer, who had brought about the end of the Western Roman empire in 476.[2]

Important details of the circumstances leading to the removal from office, arrest and execution of Boethius have not been recorded, are known only from his own account or are not clear from the sources. The background, the legal evaluation and the political assessment of the court case have long been a controversial topic of research. In any case, the main factor was the tension between the Eastern Roman Empire and the Ostrogothic king residing in Ravenna.

“Nothing is miserable but what is thought so, and contrariwise, every estate is happy if he that bears it be content.”
– Boethius, The Consolation of Philosophy

In 520 Boethius was working to revitalize the relationship between the Roman See and the Constantinopolitan See; though still both a part of the same Church, disagreements had begun to emerge between them. This may have set in place a course of events that would lead to loss of royal favour. Five hundred years later, this continuing disagreement led to the East–West Schism in 1054, in which communion between the Catholic Church and Eastern Orthodox Church was broken. In 523 Boethius fell from power. After a period of imprisonment in Pavia for what was deemed a treasonable offence, he was executed in 524. The primary sources are in general agreement over the facts of what happened. At a meeting of the Royal Council in Verona, the referendarius Cyprianus accused the ex-consul Caecina Decius Faustus Albinus of treasonous correspondence with Justinian I. Boethius leapt to his defense, crying, “The charge of Cyprianus is false, but if Albinus did that, so also have I and the whole senate with one accord done it; it is false, my Lord King.” Cyprianus then also accused Boethius of the same crime and produced three men who claimed they had witnessed the crime. Boethius and Basilius were arrested. First the pair were detained in the baptistery of a church, then Boethius was exiled to the Ager Calventianus, a distant country estate, where he was put to death. 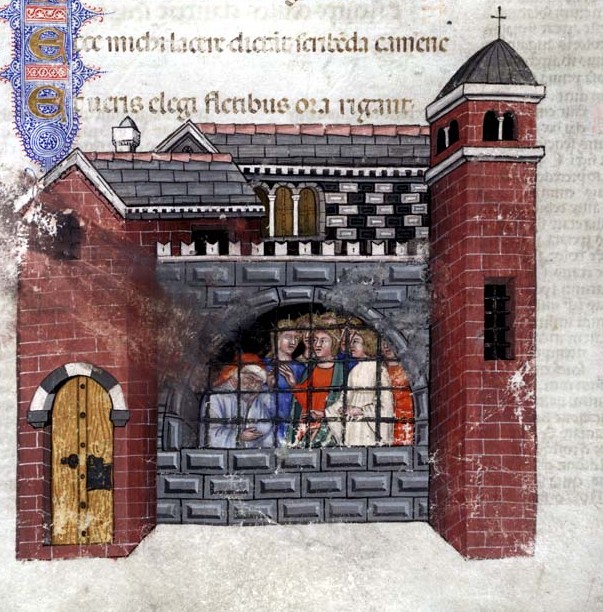 Boethius imprisoned, from a 1385 manuscript of the Consolation.

The Consolation of Philosophy

Boethius’ surviving work consists of the writings of his educational program (translations, commentaries, and textbooks), the Consolatio philosophiae, and theological treatises. Some works, including the poems he wrote in his youth, are now lost. Boethius initially wrote a classical Latin in his scientific works, based on Cicero’s model. Later he opted for a technical style and used the late Latin philosophical terminology of his time, introducing new concepts. As a translator, he adheres to the principle of exact, literal reproduction. In the Consolatio philosophiae, his expression usually corresponds to classical usage, but also shows features of late Latin. The consolatio shows that it arose during the period between the arrest and the execution. The determination of its time of writing thus depends on the controversial chronology of the dramatic events that led to and followed the fall of the Magister officiorum. It is unclear whether the scripture was written before the conclusion of the trial or after the death sentence. According to the traditional view that had prevailed since the Middle Ages, the author was in prison waiting for his execution. The consolatio describes the healing of the author, who was mentally ill in the need of captivity. His healing takes place under the expert guidance of philosophy, which appears to him as an allegorical figure. It helps him in a didactically structured dialogue to gain the insights he needs to escape despair and accept his destiny. The work can be divided into two halves. Approximately in the middle is the famous ninth poem of the third book, which is usually named O qui perpetua after its opening words (Incipit). It forms the transition and turning point between the two halves. In the first, negative part of the Consolatio, philosophy describes the transience and nothingness of earthly goods and the pointlessness of striving for them. In the second, positive part it presents the alternative to these futile efforts: the search for the only true good, the good par excellence. 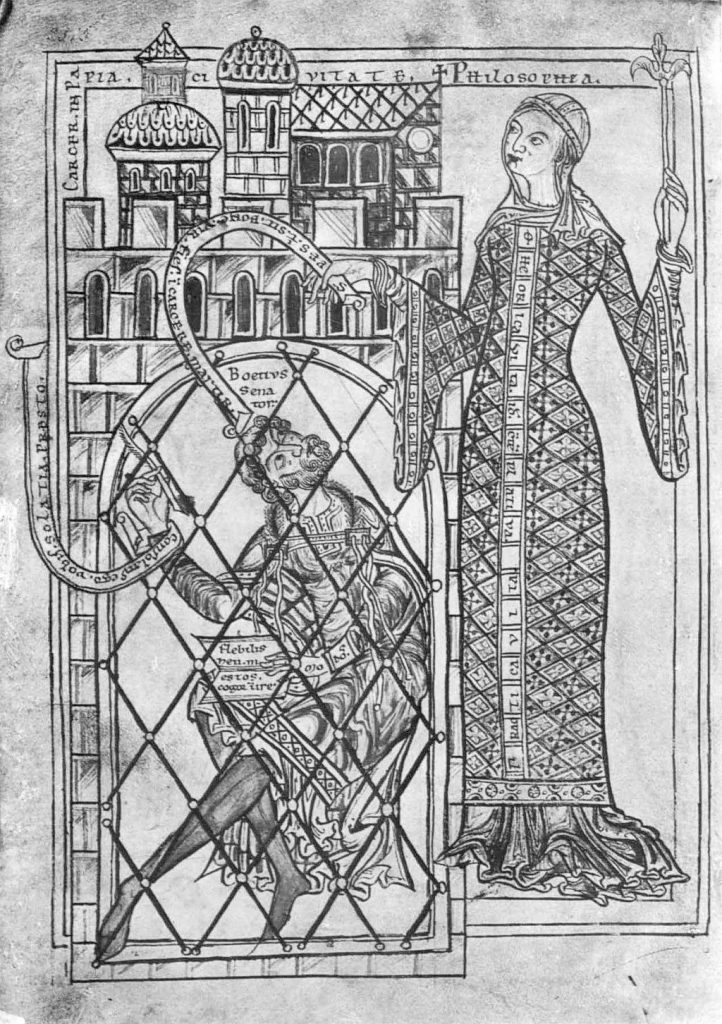 Apart from the consolation theme, Consolatio is also a protrepticos, a writing that encourages philosophy. Although the author is a philosopher, under the impression of his difficult fate he forgot fundamental philosophical insights; the work describes how he is led back to them. In this way it should also show the reader a way to the insights presented.

“While Boethius, oppressed with fetters, expected each moment the sentence or the stroke of death, he composed, in the tower of Pavia, the Consolation Of Philosophy; a golden volume not unworthy of the leisure of Plato or Tully, but which claims incomparable merit from the barbarism of the times and the situation of the author.”
– Edward Gibbon, The Decline and Fall of the Roman Empire, 1845

Contemporaries such as Ennodius and Cassiodorus expressed their high esteem for the education of Boethius, Cassiodorus praised his achievements as a mediator of Greek science to the Latin-speaking world. All ancient authors who commented on the execution of Boethius, including the important Eastern Roman historian Prokopio, were convinced of his innocence. Prokopio has a legend that Theoderich regretted his decision so violently that this emotion caused his sudden death. Since Theoderich was an Arian, from a Catholic point of view, Boethius was regarded as a martyr in some circles in the Middle Ages; it was assumed that he had been persecuted and executed by the heretical Ostrogoth king because of his faith. The Consolatio philosophiae was extremely widespread in the Middle Ages. It was part of school reading and was one of the most commented texts of the Middle Ages. Numerous translations of the Consolatio also testify to the great interest in it. Dante greatly valued Boethius as the author of the Consolatio. In Convivio he describes how, after the loss of Beatrice, he turned to reading the Consolatio to find comfort. In his Divina commedia he places Boethius in the fourth heaven under the representatives of wisdom.[3]

In the 19th and 20th centuries Gibbon’s buzzword was taken up by the “last Roman” Boethius.[4] The reason given was that he was the last one to unite the political virtues that had been regarded as typically Roman since Cicero‘s time and to hand over the legacy of antiquity to the Middle Ages with his work. Boethius is sometimes called the “first scholastic” because his logical writings were groundbreaking for medieval logic and its terminology and because he applies logic to theological questions. This term, however, is problematic and misleading because scholasticism did not emerge until the High Middle Ages.