You are here: Home › aviation › Around the World in a Balloon with Steve Fossett 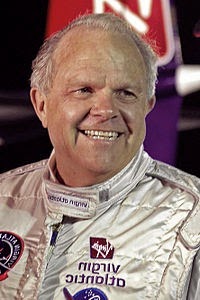 On June 19, 2002, American businessman, and a record-setting aviator, sailor, and adventurer Steve Fossett launched the 10-story high balloon Spirit of Freedom from Northam, Western Australia, for a journey around the world.

In his youth, Fossett’s career as an adventurer began when he joined the boy scouts. He began climbing his first mountains and through the years he seeked higher mountains, bigger adventures and longer distances. As an adult he remembered his boy scout years as some of the most important and most inspirational of his life. After enrolling at Stanford University, he found more and more challenges, like swimming to Alcatraz or the Dardanellez.

Steve Fossett became, next to his flourishing businesses, widely known for his numerous adventures as a balloonist, sailor, and pilot as well as for his skiing ans climbing activities. His world record in ballooning was accomplished in 1995. Fossett landed on February 21 in Saskatchewan, Canada after flying solo across the Pacific Ocean in a balloon for the first time. In 2002, the adventurer set several records in ballooning. He flew around the entire world non stop by himself in a 10-story high balloon. Fossett launched in Western Australia on June 19 and returned 13 days later on the continent. The top speed he reached during the journey was about 299km/h over the Indian Ocean, which was recorded by the control center located at Washington University in St. Louis. Fossett set records for being the fastest, the fastest around the world, and the longest flown completely solo in a balloon and the record for the 24 hour balloon distance. 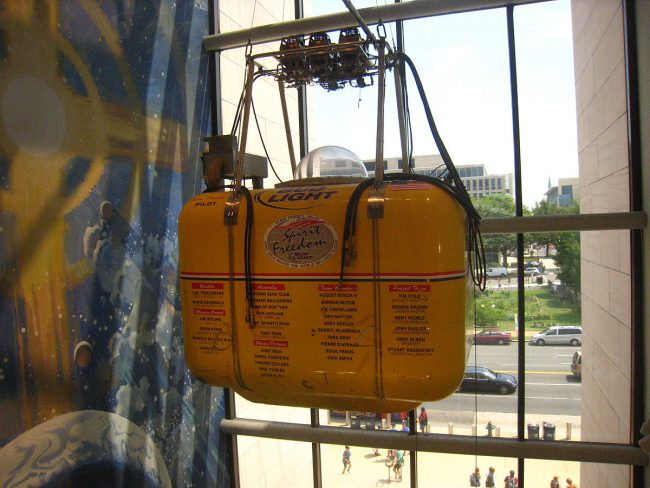 The Spirit of Freedom balloon gondola on display at the National Air and Space Museum
Image: FlugKerl2

Despite his success in the air, Fossett also seeked further challenges in the water. He counted as one of the most successful sailors, setting 23 world records and further racing records. With the maxi-catamaran Cheyenne, he set several records including the famous 24 hour record of sailing. In 2004, he circumnavigated the world in only 58 days with a crew of 13. Fossett also planned on being the first person to reach the Challenger Deep solo, but the submarine was still under construction during the time of his passing.

As an aircraft pilot, Steve Fossett also set several records, including the absolute world speed record in 2004, and the record for the first solo nonstop unrefueled fixed-wing aircraft flight around the world in 2005.

On September 3, 2007, the adventurer left for a flight with a single engine Bellanca Super Decathlon airplane at Nevada and went missing. Knowing that his fuel would reach for a five hour flight, the search for Steve Fossett began about six hours later. For days and weeks the search for Fossett and the plane wreck went on, but nothing was found, but further crash sites from previously missing pilots. Several search bases were set up across the United States ranging from California to Oregon and Pennsylvania. Even Google helped searching for Fossett with their connections to companies providing the Google Earth data. Almost a year after his disappearing, Fossett’s identification cards were found by a hiker. Further fragments of the aircraft were found after a detailed ground search and also some human bones later confirmed to be Fossett’s were discovered.

‘I was the first person to fly a balloon around the globe’ – BBC World Service, [10]