You are here: Home › chemistry › Adolf von Baeyer and the Synthesis of Indigo 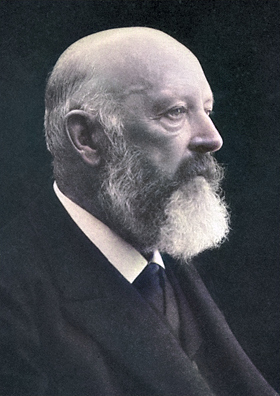 On October 31, 1835, German chemist and Nobel Laureate Johann Friedrich Wilhelm Adolf von Baeyer was born. He was the first who succeeded with the synthesis of indigo (1880) and formulated its structure (1883), for which he was awarded the Nobel Prize for Chemistry in 1905.

Adolf Baeyer was a son of the officer and geodesist Johann Jacob Baeyer and Eugenie Hitzig, daughter of the publisher and writer Julius Eduard Hitzig. Godparents were the writer Adelbert von Chamisso [6] and the astronomer Friedrich Wilhelm Bessel.[7]  Adolf von Baeyer was interested in chemical experiments from early age.After attending the Friedrich-Wilhelms-Gymnasium in Berlin, he first studied mathematics and physics at the Friedrich-Wilhelms-Universität Berlin, then chemistry with Robert Bunsen at the Ruprecht-Karls-Universität Heidelberg.[8] He received his doctorate under the supervision of Friedrich Kekulé in 1858 with a dissertation De arsenici cum methylo conjunctionibus (On methylarsine compounds).[5] In 1859, he became a private lecturer at the Friedrich Wilhelm University in Berlin, but followed Kekulé to Ghent for his further research. In 1860, Baeyer habilitated in Berlin and accepted a teaching position for organic chemistry at the Gewerbeinstitut in Berlin. [1,3]

The Discovery of Indigo

In 1860, Baeyer habilitated in Berlin and accepted a teaching position for organic chemistry at the Gewerbeinstitut in Berlin. In 1866, the University of Berlin, at the suggestion of A.W. Hofmann, conferred on him a senior lectureship, which, however, was unpaid. In this period however, Baeyer started his work on indigo, which soon led to the discovery of indole and to the partial synthesis of indigotin. Also in this period, Baeyer developed his theory of carbon-dioxide assimilation in formaldehyde. He was appointed chair at the University of Munich after Justus von Liebig had passed away and Baeyer was able to perform the synthesis of indigo.[4] One year later, in 1881, the Royal Society of London awarded him the Davy Medal for his work with indigo. In 1883 Baeyer succeeded in correctly elucidating the structure of indigo. Although Baeyer patented the synthesis of indigo, it was not really economically feasible. The manufacturing costs were too high compared to the natural dye, so that this synthesis route had to be abandoned. Later, Baeyer and Viggo Beutner Drewsen developed an industrially insignificant indigo synthesis from nitrobenzaldehyde. Only in 1900 Karl Heumann developed an economical indigo synthesis.

The Synthesis of Alizarin

Another economically important natural dye at the time was alizarin, which Baeyer’s assistants Carl Graebe and Liebermann reduced to anthracene using zinc dust. They now developed a new anthraquinone synthesis from anthracene with potassium dichromate and sulfuric acid. By treating the anthraquinone with bromine at 100 °C and subsequent treatment with potassium hydroxide, the alizarin could also be synthesized. Baeyer and Carl clarified the position of the hydroxy groups in alizarin. Baeyer also discovered the group of triphenylmethane dyes. To celebrate Baeyer’s 70th birthday, a collection of his scientific papers was published in 1905. [1,2]

Also in 1905 he was awarded the Nobel Prize in Chemistry for his services to “the development of organic chemistry and the chemical industry through his work on organic dyes and hydroaromatic compounds”. Adolf von Baeyer‘s work was known to be completed with admirable penetration and extraordinary experimental skill. He was careful never to overestimate the value of a theory. While Kekulé sometimes approached Nature with preconceived opinions, von Baeyer would say: “I have never set up an experiment to see whether I was right, but to see how the materials behave“. Even in old age his views did not become fixed, and his mind remained open to new developments in chemical science. [1] Adolf von Baeyer singled out the test tube as the most important tool for chemists.

Adolf von Baeyer died in Starnberg on August 20, 1917, at age 81 and was buried in Munich’s Waldfriedhof cemetery.